Or “I literally couldn’t fit the whole name of the game in the header.” Excuse me if I continue to shorten Corpse Party The Anthology: Sachiko’s Game of Love – Hysteric Birthday 2U to Corpse Party: 2U, as any other alternative is just far too long. 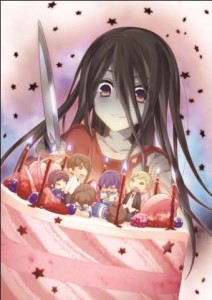 Now that that’s out of the way… Some of you may remember that I was quite enamored with Corpse Party when XSEED Games released it in English last October. Japan is quite fond of the series, as well –– it’s spanned a manga series, as well as a direct sequel titled Corpse Party: A Book of Shadows, which is currently only available in Japan (c’mon, XSEED!) and, well… Corpse Party: 2U.
Since Corpse Party: 2U is a spin-off of the main series, some knowledge of the original source material helps, but is not necessary. Instead of following in the footsteps of its two predecessors, 2U features next to no horror elements, throwing away the scares in exchange for over-the-top fan service and harem anime-style antics. The basic premise as introduced by the portion of chapter one included in the demo is that Sachiko, the namesake of the charm that causes students to be transported to the hellish alternate dimension that is Heavenly Host Elementary, wants to do a romantic comedy with the students trapped in the school. Thus, this game is firmly rooted in light-hearted comedy, though series fans will notice some morbid undertones and references to things less than pleasant. There’s even a flashback to a certain character’s iconic death from the original Corpse Party!
The main problem I have with Corpse Party: 2U largely stems from the discussion I had on fan service the other day. Though there are elements of female fan service in the original Corpse Party, it largely fit  with the disturbing themes (even then, there were a number of misplaced panty shots that really missed the mark, in my opinion). Though this may have not been the intention of the creators, I felt some of the fan service elements, particularly in the scenes involving the game’s youngest female character, actually enhanced the horrific nature of the game. Put all the characters in a comedic situation, however, and the fan service just becomes over-the-top.
I’ll admit, I was not able to finish the Corpse Party 2U demo. It was just too slow starting (there was nearly 20 minutes of the characters arguing about who should be the protagonist of Sachiko’s proposed romantic comedy), and I did not find it humorous in any way. At one point, Sachiko offers to let the students see if they can try and survive the halls of the school in order to gain freedom for themselves and a comrade of their choice, which does allow the story to advance slightly, but overall there was just a lot of uninspired chatter between cutsey female characters that will only appeal to an extremely limited audience.
Though I wasn’t really planning on picking up Corpse Party 2U, the demo has cemented my decision not to do so. The series is at its best when it remains firmly within the horror genre –– putting familiar characters in a harem-like setting may appeal to a limited range of fans, but it certainly doesn’t appeal to me. I’m sad to see this series delve into fan-fodder territory, and I hope they return to their horror roots for future installments.