Fan service. Anyone with a passing interest in Japanese media, be it manga, anime, or video games, has probably encountered fan service in some form or another. Fundamentally, fan service is anything added to a product with the intent of pleasing fans, whether it be excessive violence, sexual elements, etc. (or anything catered towards a specific fandom), but in recent years it has come to be most often associated with titillation – think panty shots, skimpy clothing, and pin-up-like poses.

As a self-proclaimed feminist and someone who pays very close attention to representations of both men and women in the media I consume, I consider myself fairly in-tune with fan service and its various forms across Japanese anime/manga and video games. I want to start off by making it clear that I don’t believe there is anything inherently wrong with fan service (who doesn’t like products that are specifically catered towards their demographic?), but I have a very hard time coming to terms with the level of excessive female fan service in majority of popular anime/manga and video games today.
One series that is particularly notorious for gratuitous fan service of the decidedly female variety is BlazBlue. And, funnily enough, I consider myself a fan of the series. Now I’m sure we could argue all day about fan service and sexism in fighting games –– after all, they’re generally the go-to games for pointing out sexism in the industry –– but I think an equally worthwhile discussion is how we, as individuals, come to accept our interest in media that clearly has elements that rub us the wrong way, for lack of a better phrase.
Here are a couple of official illustrations of two female characters from the series: 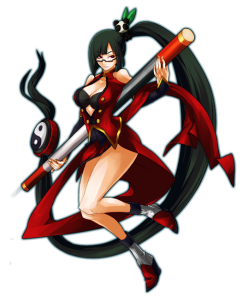 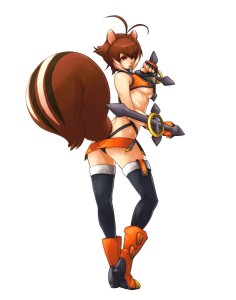 Now I’ll be the first to admit that I absolutely refuse to play as either of these characters purely on the basis of aesthetics alone. I understand that the studio behind the BlazBlue games has a demographic they are catering towards, but I also know there is a large community of female fighting game players, as well. Sometimes that’s hard to believe, especially when BlazBlue is riddled with things like this:
And would you believe that I’m not even going to touch the huge amount of fan service outside of the illustrations, such as continuous references to the various female characters’ cup sizes in in-game dialogue? Honestly, it’s impossible to address it all.
I think the thing that surprises me the most about BlazBlue is that it isn’t some obscure visual novel or a manga series aimed specifically at horny men who want to look at pictures of girls in their panties all day. This is a popular fighting game that a wide range of people play, and yet it’s full of sexualized depictions of its female characters and racy dialogue.
So why do I play it? Well, it’s fun, of course, but every time I turn the game on I find myself cringing at something or other. I can’t help but ask my self, “Why does this need to be here?” Is fan service so fundamentally integral to BlazBlue? Can we just chalk it up to the Japanese being their usual whacky selves? Thinking about all of this is giving me a headache.
I honestly don’t know where to end this discussion, as I can’t come up with an answer as to why BlazBlue and so many other popular games feel the need to sexualize their female characters to such an extreme extent. More importantly, if I don’t like how women are represented in these games, should I just stop playing them? There are so many different types of people playing video games than just straight men who enjoy this narrow idea of fan service, so why isn’t there more media acknowledging this?
In closing, I’d like to highlight the very small amount of male fan service found in the BlazBlue universe. There’s not much, to be sure…
For more discussion of fan service in manga, see Manga Bookshelf’s Fanservice Friday series. Those interested in a more academic approach to fan service in anime and manga would benefit from reading Keith Russell’s The Glimpse and Fan Service – New Media, New Perspectives. Unfortunately I could not find any discussions of fan service in video games, but if there’s something I’m missing, please let me know.