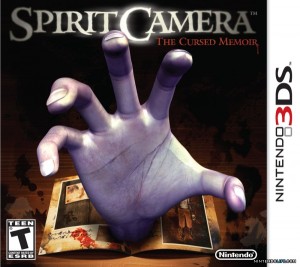 Spirit Camera: The Cursed Memoir is an ambitious title for the 3DS – one that seeks to utilize the system’s augment reality (AR) technology in unprecedented ways by bringing the world inside the game to your actual physical surroundings. When I first heard about it, it sounded quite ambitious, and its connections to the Fatal Frame series (the actual story mode in the game is called “Fatal Frame: Diary of Faces”) made it all the more appealing. Unfortunately, a slew of mediocre to poor reviews lamenting the limitations of the AR technology and subpar gameplay meant that Spirit Camera didn’t really live up to expectations.

Luckily for me, a friend purchased the game and kindly let me borrow it so that I could give it a spin and formulate my own opinion of the title. Before booting it up, all I’d really heard was that the story mode was painfully short and the 3DS’s camera could only pick up the AR book that came bundled with the game under the brightest of lighting conditions. In the hour or so I played of the title, I was surprised to find one of those statements to be not entirely accurate.

Though it’s true Spirit Camera must be played with some kind of light source, the majority of reviews have made it sound like you need bright daylight for the 3DS’s camera to properly read the AR book. I, however, played in my relatively dimly-lit living room in the middle of night, and had no problems whatsoever. What I did have problems with, though, was sitting on my couch to play the game.

See, Spirit Camera is divided into a couple different segments. First, there are times where you’ll find yourself inside a dilapidated mansion in-game and be guided through the area on rails, much like a rail shooter. You must use the 3DS’s gyroscope to look around the mansion and progress the story, and though it’s interesting in theory, I found it moved far too slow to actually create any effective tense moments. More commonly, you’ll find yourself viewing your actual surroundings through the 3DS, as it acts as a mystical camera that can actually see ghosts. At times you’ll speak to the ghost of a girl named Maya, who will appear “next” to you, while at other times you’ll need to view the AR book using the 3DS camera in order to search out the various apparitions trapped in its pages.

When you actually find and release these spirits, you’ll then need to fight them using your camera to take pictures of them, much like the traditional Fatal Frame titles. During these confrontations, you’ll need to turn a complete 360 degrees in order to find them, and this is neigh impossible to do while sitting down. Be warned, Spirit Camera is definitely not a title you’ll be able to play comfortably anywhere but your living room.

Admittedly, though all of this sounds interesting in theory, the only part I found particularly groundbreaking was the actual implementation of the AR book. Not only will you have to point the camera at the book to see certain events unfold, but a number of puzzles actually require you to interact with the book in some surprisingly ways.

I have to admit that the lack of intriguing story and any real scare factor to the game seriously diminished any interest I had in playing Spirit Camera. If it had a really enthralling story, I might be compelled to see it though to the end, but after exhausting all of the new gameplay gimmicks, I felt I’d had more than enough. It’s worth noting that you can replay the ghost battles or use the 3DS camera to take a variety of weird and silly photos. It’s not really enough to make the game worth the price of admission, but it’s a nice touch.

Anyone interested in seeing this unique exercise in the capabilities of the 3DS’s AR technology might want to check this out once it’s significantly reduced in price, but after an hour of play, I’d found I’d had more than enough of Spirit Camera.