I’m back! Where was I, you ask? Well, I neglected to mention that I was actually away on a month long vacation to the motherland! I’m back with a vengeance and horrible jetlag, but I have plenty of things I’m psyched to post about, so you should be hearing from me much more often from now on. In fact, I’ve got 3 posts going as I type, all of which should be going up in the next few days.

Regarding my trip: it was a blast! I got to see all my family and revisit some of my favorite old haunts. The whole trip can basically be summed up by the following two photos:

Yeah, so basically Shaun and I ate our way down the East Cost. But! We also purchased many a game, which is what this is really about. I organized all the games that made the trek back to our apartment in Australia and took some photos for your viewing convenience! Here’s the first batch: 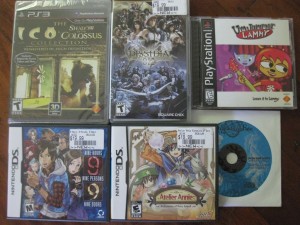 Actually, looking these over, it appears I’ve missed Dragon Quest Monsters: Joker 2, which I’m actually working on a review of now. I also received ICO/Shadow of the Colossus Collection for review and I have to say I am extremely excited about that! I’ll probably whip it out of its plastic either tonight or tomorrow since I’d like to get that review finished by the end of the week.

I’m sure you can make out most of the games pictured, but in case it’s unclear, the disc in the white sleeve in the third picture is actually Threads of Fate, which is one I’ve been wanting to play for quite some time. Don’t mention the fact that it’s available for only $6 on the PSN and that I still have $30 of credit, I won’t hear any of it!

Um Jammer Lammy technically isn’t new, as I purchased that one just before I moved to Australia last year. Somehow it got lost in the madness and didn’t make its way over with me back in June, though, so I’m happy to finally have it here so I can give it a go! I’m a very big fan of Parappa the Rapper, hence the necessity of playing Lammy as well.

I could go on forever about these games, but I’ve still got more to go, so I’ll keep it short (but sweet): 999 is another title I’ve been looking forward to playing for a long time, so I’m super stoked that Shaun spotted it, and Atelier Annie for the DS should be fun considering my newfound love of Atelier games. Also, it’s got my name in the title! Oh, and I definitely won’t be playing Dissidia 012. That one’s for Shaun (he’s not even done with Dissidia yet but I couldn’t pass it up). 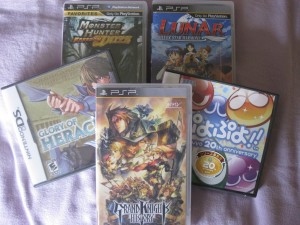 Glory of Heracles was purchased new from Amazon for a whopping $4 (I’m sure can imagine the smug smile on my face right now) after one of my very favorite game writers, Brad Gallaway, wrote a few positive comments about it on Twitter. It was actually Brad that gave me the push I needed to finally buy a Monster Hunter title, as well! Peer pressure…

Grand Knights History and Puyo Puyo!! 20th Anniversary are both Japanese releases that my mom so graciously picked up for me when she was over in Kyoto on business. The day that Grand Knights History finally made its way into my grubby little hands was also the same day XSeed announced that they would be localizing it… Well, I am certainly elated that they will be localizing it, just not that I picked up a copy of the Japanese version (I’m lazy and would probably have just played it in English, given the chance). 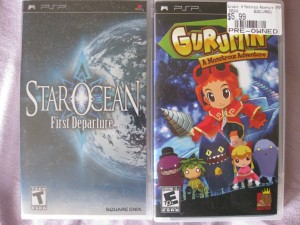 Finally, here are two games I know absolutely nothing about. They were both under $7, how could I resist? And that purple ghost with the top hat in the corner of Gurumin is just too cute. Did I mention that I’m totally jealous of the extent of PSP games available in US stores? I could walk in a store and actually find some PSP games, whereas half the time here in Australia they don’t even carry any! I do regret not picking up a copy of Persona, but I had to reel it in at some point.

So, thoughts? I realize this haul is seriously skewed towards handhelds, but that’s partially because Rune Factory: Tides of Destiny got pushed back, making me unable to through my money at Natsume for that one. Speaking of which, Gabrielle’s Ghostly Groove for the 3DS was released the day before we left, but I went to a Game Stop and they said they wouldn’t get it in until this week. Unfortunate, because now I’ll have to import that one.

Let me know if there are any titles in particular you’d like me to tackle first and share my thoughts on!