To be honest, I haven’t been a member of Club Nintendo all that long. I believe I first joined in 2010, when I realized I actually bought enough games that came with point cards to actually get some free stuff. And what fun I’ve had! So far, I’ve snagged the 2012 calendar for being a gold member in 2011, the psychedelic 1-up tote bag, the limited batch of 3 Kid Icarus Uprising AR cards, and The Legend of Zelda: Majora’s Mask for the Wii Virtual Console (hey, I’ve never played it!). I’m still holding out for my holy grail of Nintendo Club rewards: the elusive 800 coin Mario hanafuda cards. Someday!
All in all, I’d say it’s a rather good haul, considering it’s all perks for buying games I would’ve purchased regardless of coins (or stars, if you live in AU –– and yes, I have a Nintendo Club AU account, as well). Nevertheless, I’ve been green with envy at the amazing Club Nintendo items Japan gets on more than one occasion in the short amount of time I’ve actually been tuned into the various things each region gets. This time, though, takes the cake: Japanese Club Nintendo members have the opportunity to score Nintendo-themed polo shirts. Not only that, but they’re completely customizable! 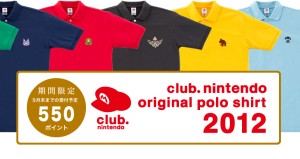 For a mere 550 points (funny how every region uses a different “currency”), one of these babies could be yours. Well, if you live in Japan and haven’t spent your hard-earned coins on one of the many other awesome rewards that’s come out in the past few months.

What I find most exciting about this is the fact that you can completely customize what decal you want, the shirt color, and even the size. Don’t like the color combinations above? No problem, just head over to the Club Nintendo site and play around with the colors and images until you find something that you like. Just don’t blame me if, in doing so, you get really depressed about the fact that we’ll probably never see these outside of Japan.

It’s pretty obvious what I’d pick, but if you’re curious, I’d definitely have to go for the purple Animal Crossing cat. It’d look best on a pink or light blue tee, don’t you think? My runner up would have to be the heart capsules, but the Game & Watch one is pretty cute, too…