First of all, a very happy Thanksgiving to all of you in the US! We don’t have Thanksgiving here in Australia, of course, but that doesn’t mean I can’t be wistful for the turkey and cranberry sauce… The major holiday in November over here is Melbourne Cup Day, but with all the dressing up in expensive hats and betting on horses, I’d say it emphasizes few different priorities…

But Thursday wasn’t a normal day for me! Far from it –– this Thursday marked the release of The Legend of Zelda: Skyward Sword in Australia. Well, technically the street date was broken (yet again), so you could pick up the game if you preordered it as early as Tuesday, but I got mine yesterday (don’t get me started on street date breaks in AU).

As most of you should know by now, there’s one big hurdle I’ll need to overcome before I can play my copy of Skyward Sword. Namely, I don’t have a Wii! I know, I know, a little late to the party…

It’s not exactly a question of “if” I’ll get one, of course, but more like “when” –– I know there will be some holiday sales soon enough and I can’t decide whether I want to hold out until they roll around in December or not! So many decisions! In the meantime, I asked some of you on Twitter what games you’d most recommend for the console, but I decided I’d like to open the floor up to everyone. First, let’s see what games I’m most looking forward to playing… 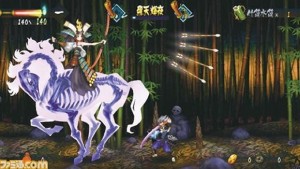 Murasama: Demon Blade
Basically, all you have to do is utter the word “Vanillaware” and I’ll be there. The company’s amazing art direction (though the lead artist’s penchant for bubble breasts and thunder thighs leaves something to be desired…) never ceases to take my breath away, even if I’m not always a huge fan of the gameplay. Murasama‘s focus Japanese mythology makes it a must-have in my book.

Resident Evil 4
I’m putting this sucker on the list because I know my husband would quite enjoy it. I saw a significant portion of the game played back when it came out for the PS2, but I’m really just awful at tense games where I’m required to shoot things. I’ve heard the Wii controls really shine in this game, so I would love to see my husband give it a go. Honorable mentions in the category of “games my husband and I can enjoy together” would be Donkey Kong Country Returns (can you believe he’s never played the original?) and maybe House of the Dead 2 & 3 Return. 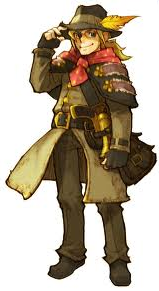 There are few video game animal mascots I love more than chocobos. Actually, probably the only thing I love more than chocobos are moogles (sense a pattern?). I’ve never gotten into the roguelike genre before, and figure chocobos and cute things might soften the potentially harsh blow the traditional roguelike might have (I’m really a wimp when it comes to games). Also, Cid’s design in this Final Fantasy spin-off is pretty rad (right).
Little King’s Story
I’ll be honest, I don’t really know a whole lot about this game. But what I do know, I like, and this is definitely one of the top games on my “must pick up immediately” list. From what I’ve seen/heard, it seems like a Harvest Moon-type life simulator with some unique gameplay elements, and if that’s the case, then I’m all for it!
Rhythm Heaven Wii
I shouldn’t need to say much about this one. I loved Rhythm Heaven on the DS, and it goes without saying that I’ll pick up this next installment. Problem is, I’ll have to get a big chunk of play time in before my husband gets his hands on it! If he gets half as obsessed with this one as he did the last, he won’t stop until he’s got gold medals on every song! We still find ourselves humming some of those tunes…
Well, of course there are many many more Wii titles I plan on picking up eventually, including classics such as Kirby’s Epic Yarn and Super Mario Galaxy 2 (I’ve seen a significant portion of the first already, would rather experience Yoshi). Any titles you think I should add to my list? Let’s hear your top Wii games!