Yesterday, I was privy to some surprising, and slightly disturbing, news. For those of you who are unaware, ‘visual kei’ is a specific type of Japanese rock music that is characterized by the fashion the band members wear. Musically, they often sound something like a mix of glam rock, punk, and metal (thanks Wikipedia!), but more than the music itself, visual kei is defined by the flamboyant clothing, makeup, and stage personas of the members. I myself have my roots in visual kei–I appreciate the style and a number of bands that define themselves as visual kei, but I wouldn’t go so far as to say I’m a huge, die-hard fan of the movement. My tastes run more along the lines of a certain band called Buck-Tick (a band that is actually credited as being one of the founders of the visual kei movement, but I digress).

Suffice it to say, when I heard that Disney was going to release an album called “V-ROCK Disney” in Japan, I was shocked. Disney songs sung by… visual kei bands? Alright, Japan, you’ve come up with a lot of wacky Disney crossovers that were almost universally panned when they were first announced (Kingdom Hearts, I’m looking at you), but this might be taking it a step too far. Here’s a couple of images to help illustrate Disney x visual kei for you all: 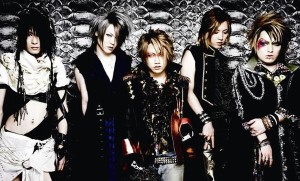 The members of this band, Nightmare, will be singing… 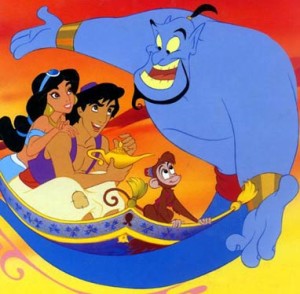 … “A Friend like Me” from Aladdin?
Of course you can’t get a proper idea of what kind of music Nightmare does from an image, so here’s one of their more popular songs for your consideration:
Don’t get me wrong, I actually love this song (you may recognize it as the opening theme to the anime Death Note), but when I think about them doing a cover of an Aladdin song… I don’t know what to say about that.
For anyone like myself who has a morbid curiosity in this CD, it will be released in Japan on September 7th, and shops such as CD Japan will probably stock it in the future for international buyers (it’s not listed yet, however). You can also see a full track list and bands it will feature at this Tokyo Hive article.