Well, besides that book review, I’ve been a little MIA as of late, huh? Time to fix that!

As I mentioned in my previous post, I’m now a member of the lovely, inspiring team at www.videogamewriters.com! I’ll be covering news and some reviews, with a slight angle towards Japan-only releases and news fresh from the land of the rising sun. I believe my first review for them will actually be of Grand Knights History for the PSP in September, and I’m looking forward to it! (thanks to The Gay Gamer for making me aware of this game in the first place!) So far I’ve written a few news articles, and most notably an opinion piece on Nintendo’s decision to exclude DVD playback capabilities while pursuing possible social network connectivity in the Wii U, so if you’re at all interested, I’d love if you gave it a read! If you want to be a real pal, show your support for me and the rest of the team at Video Game Writers by following us on Facebook and/or Twitter! And I highly suggest you check out some of the other articles on the site, it really is a pleasure to read (and there was absolutely no mention of booth babes in any of their E3 coverage!).

In other news, we had another StreetPass Brisbane meetup last weekend, where one of our members was kind enough to pass on her copy of Alice in Wonderland for the DS to me! It’s one of the only movie/game tie-ins that ever looked any good to me, so I’m excited to check it out.

Another one of our members ordered the giant AR card from Nintendo Club Australia, and he brought it along to the event so that we all could take some snazzy 3D photos of giant Mii’s and Nintendo characters. We got a lot of questions and interested passers-by. Here’s what we looked like: 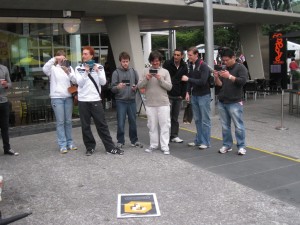 Nothing like a bunch of 3DS fans gathering together, I say! In fact, this Saturday has been declared 3DS StreetPass Day by none other than Nintendo, and to show StreetPass Brisbane’s support we’ll be holding an event on the day, too. I’ll be trying my hand at hosting a Super Street Fighter IV 3D Edition tournament (wish me luck, I’ve never done something like this before!).

I’d love to write more but since this post is long overdue, I think I’ll leave it at that for now and save the rest for subsequent posts. I don’t like how dead things are getting around here!