First, I have a confession to make: I bought Monster Hunter 3 Ultimate. On launch day. The eShop version. If you’ve listened to latest episode of The Nichiest Podcast Ever, you’re probably wondering why the sudden change regarding digital 3DS game purchases – to make a long story short, it really does end up a lot cheaper for me, considering I need to import North American games, and I honestly can’t think of a better game to have on you at all times than Monster Hunter. Needless to say, so far I’m loving it!

As someone who’s been involved in translation work and harbors a deep interest in game localization, it’s always a treat to gain some insight into how different companies go about localizing my favorite games. Monster Hunter 3 Ultimate is particularly intriguing because of all the various monster names –– though not quite as colorful as some of the stranger Pokémon nomenclature out there, localizers like Andrew Alfonso at Capcom have to consider both the Japanese name and the characters of the monster in order to come up with the perfect fit for the English version. 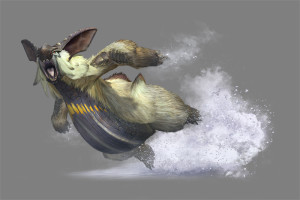 Take this fellow who was featured in the rather obtuse demo Capcom released for Monster Hunter 3 Ultimate earlier in the month (seriously, if you’ve never played Monster Hunter before, I really wouldn’t advise trying the demo, as it paints a very poor picture of the game). Its Japanese name is Urukususu, but for the localized versions, the team settled on Lagombi. Their logic was to base the name off the Greek word for hare, “lagos,” and add the “-mbi” at the end to evoke a Bambi-like cuteness. I wouldn’t say Lagombi is particularly cute, but I actually like how the cute name is juxtaposed with its tubby, ferocious, albiet rabbit-inspired exterior. 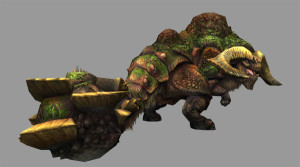 Andrew discusses this fearsome-looking fellow in the second localization note post for Monster Hunter 3 Ultimate. The Japanese name, Doboruberuku, is apparently based off words from a number of different languages, so the team decided to follow that theme for the localized name, Duramboros. Andrew explains that the name is based off of three different words from three different languages: Duro (“hard” in Italian), Ambulat (“walk” in Latin), and Oros (“mountain” in Greek). He adds that they were also able to incorporate “ram” to emphasize its massive horns, which I think is a really great touch. 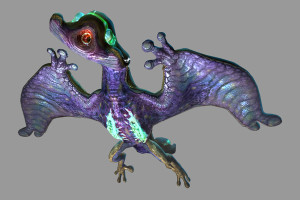 Finally, naming this creepy purple guy took some debating before the Monster Hunter developers agreed. In the final post of the series, Andrew discusses how this Gigginox subspecies was originally going to be the “Copper Gigginox” due to its normal color, but the dev team wanted a name that highlighted how this monster can paralyze hunters with its lightning attack. After some back-and-forth, they finally settled on “baleful,” as the word not only conjures up the color yellow and paralysis, but also has a unique sound to it. Given that their other choices were “Volten” and “Dread,” I think Baleful Gigginox was a great choice!

There are plenty more examples of different names the team had to localize at the blog links I provided, so if you found these descriptions interesting, I highly recommend checking them out! And Monster Hunter fans: what are your favorite monster names? I’m new to the series, but I’d love to hear the names that people find particularly interesting or evocative of the monster they describe.