Leave it to the lady writing the tutorials to forget the actual dates the new chapters of the Lightning Strikes Final Fantasy XIV: A Realm Reborn event started! It feels like just as I was posting my impressions of chapter one, chapter two was going up, and before I knew it, chapter three was out, too! But since the formula of each chapter is pretty predictable, it makes sense to combine these two middle chapters into one. Yeah, that’s it, I was planning it all along…

First, here’s a shot of the Pugilist weapon that I got from chapter one of the event. They look pretty neat/massive, but as I mentioned in the last post, they’re too low level to be useful.

To participate in chapter two, players must complete the chapter one quest “For the Winsome” and be level 26 or above. The quest NPC for chapter two, “Seeking the Scoop,” is Dural Thural and can be found in Uldah, Steps of Nald (X:11, Y:8). 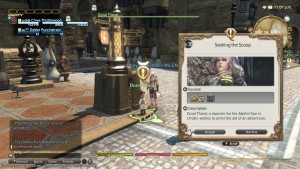 Looks like news of Lightning is spreading across Eorzea like a wildfire, and all the reporters want the best story! After accepting the quest, it’s off to Little Ala Mhigo in Southern Thanalan (X:21, Y:11) or Highbridge, Eastern Thanalan (X:28, Y:26). In both cases, the Lightning FATEs are unique to the event and will be titled “Lightning Strikes – Armored Beast.” 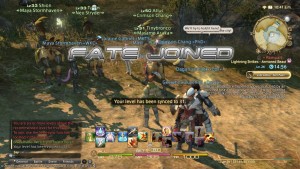 I had the wonderful luck of forgetting that my inventory was full when I did the FATE, so I wasn’t able to receive the item the first time I completed it (for the record, the very first time the FATE spawned I was too busy trying to get screenshots to even participate). Since it takes a good 30 minutes for the FATEs to appear, I was rather grumpy at this revelation. 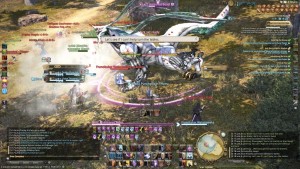 Luckily Mog had my back once again and got a really great screenshot of the beast in this FATE! But “Armored Beast,” really? Can’t we think of a cooler name? Anyway, I’m glad they brought in an enemy from the Final Fantasy XIII universe, as it makes things a bit more interesting. 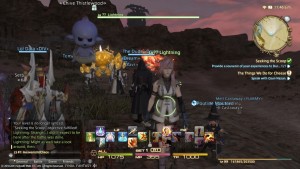 After I went and got rid of some items in my inventory, I decided to hop over to Little Ala Mihgo to try the FATE there. The beast you fight is the same, but I love this shot I got of my baby imp minon with Lightning! It was fun to see people follow her as she waked away after the FATE was completed. 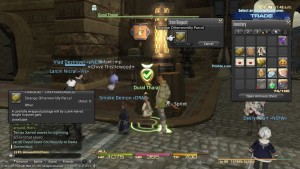 This time around, you only need the one Strange Otherworldly Parcel to complete the quest. Unfortunately, the chapter two parcels can not be redeemed for the weapons with the NPC who stands next to the chapter one quest-giver, which means folks who were hoping to accumulate parcels to trade for weapons over the course of the four event chapters will be out of luck. You can only get them from the chapter one FATE! 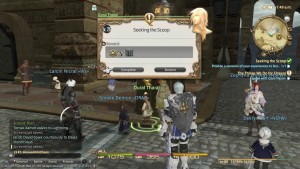 And there’s my reward… Snow’s pants. 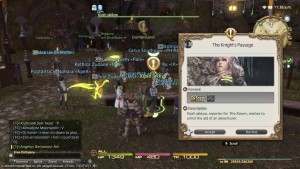 As for chapter three, “The Knight’s Passage,” I ended up completing it in an extremely roundabout way. Since the level required is 38, and I was only 37 (after much grinding) when it started, I actually did the FATEs before accepting the quest itself! If you find yourself in the same position, I’m happy to report that you still obtain the required item from the completing the FATE even if you haven’t accepted the quest, so you can always go back and do the quest when you’ve reached level 38.
For the folks who want to go about it the conventional way, you first need to speak with Kipih Jakka in Old Gridania (X:10, Y:8) to obtain the quest. As always, you’ll need to have completed all previous chapters before you can proceed. The FATEs themselves are located in the snowy land of Coerthas, near Whitebrim (X:15, Y:20 ) and The Weeping Saint (X:31, Y:7).
Here you’ll be faced with another boss battle with Lightning fighting by your side. I’m starting to sense a theme… This time, however, the enemy is a Clockwork Dreadnought in a FATE called “Lightning Strikes – Dead on Arrival.” As before, it’s the same FATE in both locations, and right now they’re going down extremely quick as everyone rushes to complete the quest, so it may be worth waiting near where they spawn so you can make sure you get a gold medal. 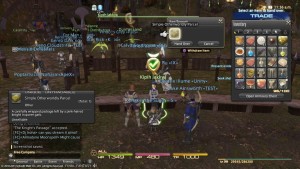 This time around, you’ll be trading in a Simple Otherworldly Parcel in exchange for a pair of boots, meaning chapter four’s reward will (appropriately) be the final touch to your outfit, a dramatic Lightning or Snow coat. As I mentioned before, I ended up doing the FATE before accepting the quest, so all I had to do was talk to Kipih to accept the quest and then immediately talk to her again to turn in the item. After you do so, you’re treated to a short cutscene where Lightning shows up. Fully voiced, too! I gotta say, though, it looks like she’s lost a lot of weight…
After his hard work was done, I took Chive to a resort to celebrate: 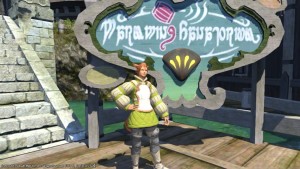 Now, the fourth and final chapter of Lightning Strikes will start on the 20th, but there’s no way I’ll be at the required level 45 by then. If I’m lucky, I’ll make it with time to spare before the December 9th deadline! Here’s hoping the finale is a little more exciting, as sitting around waiting for the Lightning FATEs to spawn hasn’t been the best time I’ve spent with Final Fantasy XIV: A Realm Reborn so far. I did luck out with chapter three, though, since I was able to complete the FATEs while I was leveling.
If you don’t manage to hit 45 before the 9th, there will be a chance to complete the chapter when the event relaunches in February to celebrate the western release of Lightning Returns: Final Fantasy XIII. I gotta say, though, I’d like to be one of the cool kids who completes it early… Wouldn’t you?