For someone who loves planners to the point of having three separate planners for 2013 alone (no, I don’t use all of them, they just gravitate toward me naturally), I’m embarrassed to say I’d never heard of the Hobonichi Techo before it was announced that it would be getting an English version this year. I say this is embarrassing because the Hobonichi Techo has been somewhat of a phenomenon in its home country of Japan ever since it was first released in 2001. It also holds a special place in the hearts of gamers, as Hobonichi is the company founded by Mother creator Shigesato Itoi! 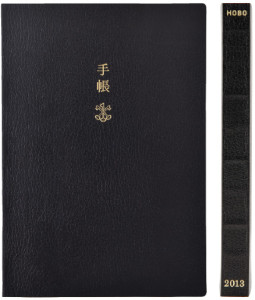 While I have my own personal yearly Rilakkuma planner tradition, there’s something very appealing about the community that has sprung up around the Hobonichi Techo due to its accessibility and quirkiness. The largest version of the planner has a page dedicated to each day, so people have started customizing their books in a wide variety of ways and posting their daily entries all over the place. It really is a joy to see what everyone is doing with theirs!

And now with the release of the English version, we’re not only seeing coverage of the planner on sites like Tiny Cartridge, but Tumblrs have sprung up to celebrate its greatness. I have to say, I just love the sense of creativity the community has and would love to be a part of it myself next year! If you’re interested in checking out more Hobonichi Techo pictures, I definitely suggest browsing the #ほぼ日手帳 tag on Instagram.

Can You Pet the Dog? @canyoupetthedog ·
22h