Anyone who’s a fan of Pokémon probably knows that Japan has plastered the lovable critters faces in virtually every inanimate object available – including trains, school buses, and even airplanes. The upcoming POKÉMON with YOU train (yes, that capitalization is intentional), however, takes the trend a little bit further by featuring a full Pokémon-inspired interior and special play carriage with the theme of a “Pokémon forest” for rambunctious children! 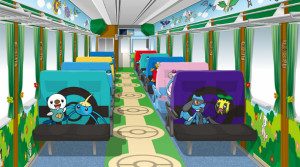 Of course, these images are an artist’s interpretation and do not reflect what the final train will look like exactly, but it will probably be fairly similar to what’s pictured above and below. 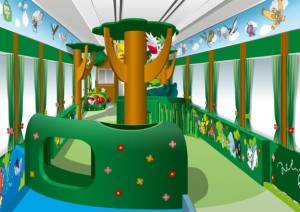 Now, I can safely say that I would definitely ride the POKÉMON with YOU train if given half a chance, but I’m not really impressed with the color scheme, especially those horrid bright-colored seats in the first illustration. Yuck!
If I were the president of The Pokémon Company (and I clearly should be), I would’ve utilized the gorgeous designs used in the Pokémon Time merchandise series exclusive to Pokémon Centers in Japan. Well, at least the outside looks pretty adorable:

The POKÉMON with YOU train is part of the POKÉMON with YOU program, which was established as a way to spread happiness to the children of Japan after the 2011 earthquake and tsunami. It will run in the Tohoku region of Japan (the Northern section of Honshu, Japan’s main island, which was most affected by the disaster last year), consist of two cars, and have 100 different Pokémon featured throughout. The first week of service, December 22nd to the 28th, will be exclusive to victims of the disaster, following that it will be open to the public for 160 days. That means it’ll still be running when I visit Japan in June! Now, if only I could find a reason to go to Tohoku and a child to bring along so I don’t come off as a total weirdo…

I wonder if the stewards will wear Pokémon-themed uniforms like the attendants on the Pokémon planes? 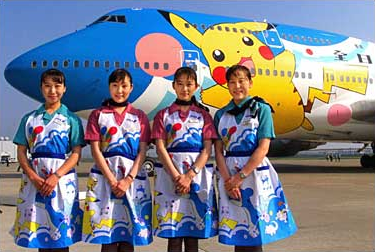 Note: I’ve just switched to Disqus for comments, so please let me know what you think of it!