I’m probably not the first person to say that they never expected a moe fishing game to get localized, and I probably won’t be the last, but I’d like you all to take a moment to ponder with me the implications of a moe fishing game coming out in North America over all of the other possible titles that could be in the process of being translated right now.

Okay, I’m being overly dramatic, but I have to say I was completely floored by this announcement. Let’s Fish! Hooked On (or Let’s Try Bass Fishing: Fish on NEXT as it is known in Japan) takes an interesting approach to the world of fishing games by combining sickeningly cute character designs by a famous Japanese artist with “realistic fishing action.” Subsequently, it’s also the first full-fledged fishing game for the PS Vita. I imagine the front and back touch controls could work very well in a fishing game, if implemented correctly.

So, does all this mean I’m actually interested in picking up Let’s Fish! Hooked On? Well, aside from the fact that I think the phrase “hooked on” is genius and whoever came up with it should get a raise, I’d have to say intersection of two niches has me morbidly curious. Actually, the first thing that went through my mind while reading the announcement was, “Now wouldn’t that be a hilarious title to blog about!” I’m not exactly sure I should be judging my gaming purchases on how funny they’ll be to read about after I gruel through the process of actually playing them, but I’m sure there is some degree of fun to be had in Let’s Fish! Hooked On. Actually, the developers did take a second to think of possible female fans. After all, one of the four playable characters is a guy:

More than anything, thinking about Let’s Fish! Hooked On has got me wondering if it’s time I jumped into the world of fishing games. Fishing Resort, which was released on the Wii late last year by XSEED Games, is another fishing game that caught my eye recently. It largely went under gamer’s radars due to the fact that not many people care about fishing games to begin with, and the Wii was pronounced a barren wasteland of shovelware long before it came out. 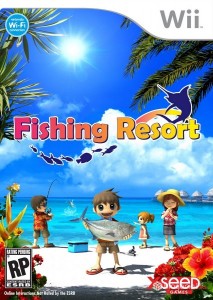 Not only is the art style more to my tastes than Let’s Fish! Hooked On (can you tell I’m trying to see how many times I can fit that name into this post?), but I haven’t heard a negative opinion of Fishing Resort yet. Also, it has ice fishing.

The moral of the story is that I’m now this close to buying a copy of Fishing Resort. It may not be game of the year material, but it certainly looks like fun.

And since I’m on the topic of fishing games, I can’t not mention the Legend of the River King series. I’ve been debating whether or not to buy a copy of River King: Mystic Valley (DS) for ages now, and my recent interest in fishing games has brought me back to “should I buy it, or should I not” land. The indecision is killing me!

So: fishing games. Love ’em, hate ’em, or ambivalent towards ’em? If I only bought one fishing game, Let’s Fish! Hooked On, Fishing Resort, or River King: Mystic Valley, which would you recommend?