Let me profess that I literally know next to nothing about joystick modification. In fact, I’m not much of a fighting game fan in general, though I am known to rock a pretty solid Lee in Tekken and Arc Systems Works is always on my radar for their sleek titles (I’m looking at you, BlazBlue Continuum Shift Extend Vita). In fact, I can honestly say that I’ve never played more than 5 minutes of a Street Fighter game (or Final Fight, for that matter), and as such I know next to nothing about the intriguing, pink-haired character known as Poison who will be making an appearance in the roster of Street Fighter X Tekken… Except for the fact that she is famous for being a transgendered female character. Which I think is thoroughly awesome, if you had any doubts.

Long-time games writer shidoshi (who you may know as @pikoeri) echoes my sentiments – he even got the chance to interview Yoshinori Ono about Poison, and he refrained from any of the usual snide remarks that most so-called games “journalists” make when talking about her. I highly suggest checking the interview out if you haven’t seen it already.

But now you must allow me to get right into the meat of this post: the beautiful Poison-themed joystick mod shidoshi has created, aptly named “Poison has a Stick”: 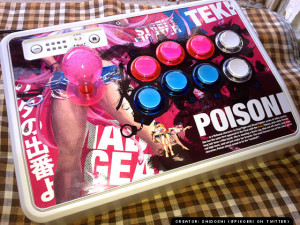 Beautiful, is it not? I’d play a fighter with that joystick any day of the week. For clarification on the little innuendo you may have picked up on regarding the interesting placement of the joystick, here are shidoshi’s thoughts in his own words:

“[…] This stick wasn’t made with the intention of making fun of the character Poison or her “is or isn’t she transgender” status, nor was it done simple for some sort of cheap “it’s a trap” connection. I mean, of course—the design was absolutely done in good fun and with a lot of humor—but it was done in celebration of the character of Poison, not in mocking her or what she is.” (source) 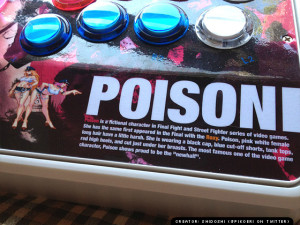 Now excuse me while I go brush up on my fighting skills so I can justify a snazzy joystick purchase – it’s just too bad this one’s one of a kind!

UPDATE: shidoshi posted over on his Twitter this amazing picture of none other than Yoshinori Ono holding the aforementioned joystick at a Street Fighter X Tekken event! How awesome is that? 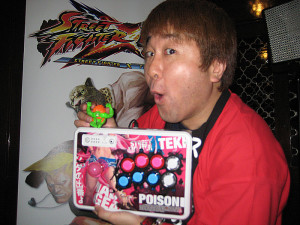