Hello friends! I’m sure you didn’t actually think the Hakuoki release would come and go without me having something to say about it, right? Of course not! I was lucky enough to snag a review copy of the game for the ever-awesome Game Critics, but unfortunately it hasn’t gone up on the site yet. But never fear – I have plenty of things to say about the game in the meantime.

First off, I had the fabulous oppertunity to ramble about Hakuoki and all things otome with the lovely Lijakaca of Lijakaca’s Otome Gaming Blog. She is a mecca of otome gaming knowledge (her blog is a must follow for fans of otome games), so if you thought I knew what I was talking about, just you wait! (hint: I don’t, usually) We had a great discussion about the game itself and also delved into otome game topics in general, so if any of that catches your fancy, I heartily suggest you check it out! Click on the handsome Hakuoki men below to give it a listen! Please be sure to tell me what you think in the comments… I’m still very new to podcasting, so any tips you may have that I can keep in mind for future endeavors would be greatly appreciated. 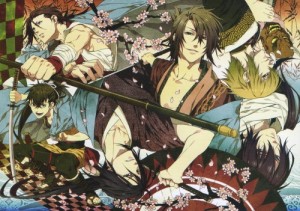 So what did I think of Hakuoki in the end? I’d like to save my final evaluation for the review when it goes up, but I do have some points in particular I can share:
All in all, I enjoyed my time with Hakuoki. I definitely suggest anyone who wants to try an otome game to pick it up, and would even recommend it to those who don’t if they like a good story set in feudal Japan. My only wish was that it had more romance! And, in all honestly, a supernatural story mixed with historical fact isn’t exactly my kind of thing, so I probably wouldn’t have picked this up if it weren’t for the fact that it was the first big name otome game to be released in English.
But wait! Before you go, Video Game Writers is doing a giveaway where the prize is the game of your choice! So you could very well win a copy of Hakuoki, if you want! All you have to do is sign up for VGW on Google Currents for your iDevice or Android phone. An added bonus is you’ll get to read news and reviews written by me (and some other people) in the palm of your hand! Neat, eh?
Have any of you had a chance to play Hakuoki yet? If so, let me know what you thought!