Why, it’d be me, of course! I had the honor of going to the EB Games Exposition in Gold Coast on Saturday, which featured all the latest and greatest games available to demo, along with a whole lot of other things I honestly didn’t get a chance to check out. Armed with my first ever press pass and my ever-tolerant husband (I think he’d rather be at home playing games than waiting in line to try a 5 minute demo), I endured long lines and more sweaty men than I’d care to remember to try out all the latest games. 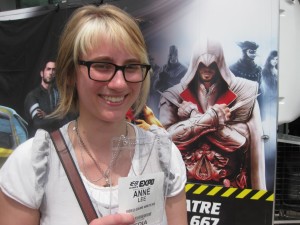 Obviously I played a whole lot more than Professor Layton and the Last Specter, but for the purposes of this post I thought I’d just quickly recount what I thought about one element of the game that I was particularly excited for– the additional game, Layton’s London Life. Let’s face it, I really only got to play the thing two days before it’s officially released in America, but early is early, right?

It was a bit sad to see one lone DS XL hiding in the corner of the Nintendo booth, but as soon as I saw the Professor Layton logo I swam through the masses to get my hands on it–and play it I did, because absolutely no one was interested in trying it except for me. Too bad for them, I guess! 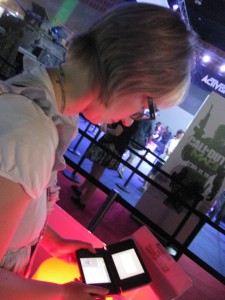 The main story mode was more of the same, really, and since I figured I had limited time I decided to see if I could back out and try Layton’s London Life. I honestly think it was a full version of the game, as I actually got to start a whole new Layton’s London Life save and create a character, whom I gave an incredibly grouchy face, pigtails, and the name “Nimmy.” The character creation is a bit limited but the options available make it fun nevertheless, and I was not one bit disappointed by the lovely Mother-esque graphics. 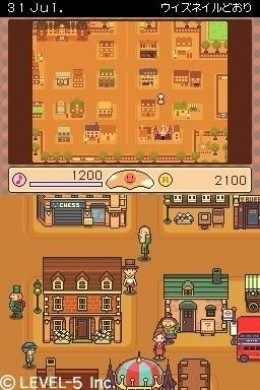 Though people have been calling London Life an RPG, it’s really more of a lifestyle game a la Animal Crossing. You get to dress up your character, go fishing, pick flowers, and do various fetch quests for a myriad of London’s inhabitants. People who like Animal Crossing are going to find a lot to like about London Life. In fact, I’d hazard to say it’ll hold you over until Animal Crossing 3D finally comes out!

So, in the end, I didn’t really get to play a whole lot of Professor Layton and the Last Specter, and the release date is so close that it seems a little silly to write up demo impressions, but suffice it to say if you’re planning on picking the game, I don’t think you’re going to be disappointed. Oh, and any of you who do better tell me your friend codes so we can visit each other’s Little Londons!