Happy Friday! Or… Thursday evening, to most of my readers on the other side of the world… Don’t worry, it’s almost Friday!

I can’t believe my last update was about something I found at a vintage shop and I’m already back, less than a week later, with some more goodies. I guess someone’s on a vintage kick these days (who, me?)… Actually, what inspired my last trip to the Paddington secondhand shops was an intriguing DIY tutorial in my new favorite Aussie magazine Frankie for a “paper wall quilt.” Long story short, the project consists of cutting pieces of paper and cardboard into hexagons, gluing them together, and pasting them on your wall to form a quilt-like pattern… Very easy, and a very pretty, unique result! You can use any kind of paper you want, such as origami paper, wrapping paper, or even printed fabric… I thought it’d be great to find a vintage children’s book and do a combination of words/pictures, because I love old illustrations. Since my husband is big on music, we’re going to go on another shopping excursion to find some vintage sheet music to use, as well. I will definitely post my results when the project is finished! But for now… 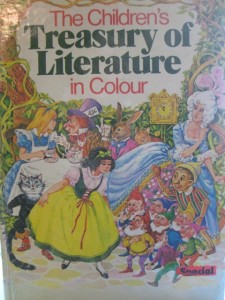 First, I apologize for the poor photos… I really need to get better at taking pictures, or start employing some photo-editing magic to make the pictures I take a little more pleasing to the eye… The lighting is just so poor in our apartment. But! Surely you can still enjoy what an adorable book this is! And the price? An even more delicious $2.00! What a steal 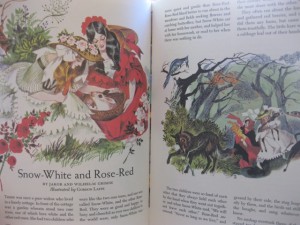 I spent a long while browsing through the picture book section of one of the better vintage stores for just the right book. Pretty illustrations were a must! At a grand total of 550 pages, there are certainly plenty of nice illustrations, and each story is done by a different artist, so there is an eclectic mix of styles that is really great. The picture above is one of my favorites, I just love the illustration on the left! The style almost reminds me of The Rose of Versailles. Why yes, they are looking at a rabbit in a basket!

One of the stories is even illustrated by a Japanese woman! 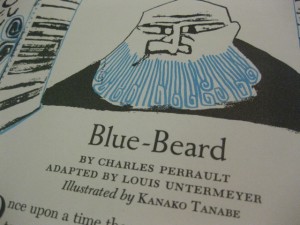 From these two images, you can really see the range of styles depicted in this book! How interesting! I’m totally loving it, if you can’t tell already. It’s also really nice to see a wide variety of stories from different cultures, rather than just European folktales. There’s even the Japanese tale, “The Boy Who Drew Cats,” by the ever-famous Lafcadio Hearn.

Shaun and I couldn’t help but get a few giggles out of the story titled “Poo-Poo Finds a Dragon,” excerpted from Poo-Poo and the Dragon by C. S. Forester, if only because of the over-use of the protagonist’s cute but slightly-unfortunte name. Case in point:

So, in the end, I may not want to cut up this book after all. There are too many fun stories and illustrations! Though it really would make for a great paper wall quilt. Oh, what a conundrum! Shaun suggested we read one story out loud before bed, and as we go through we can decide those we want to save in their entirety and those we don’t mind putting scissors to. It’s an idea, but luck will probably have it that all the stories we can bear chopping up won’t have particularly good illustrations, or something similarly unfortunate. We’ll see what I come up with next week!

In other news, I baked Chinese New Year peanut cookies yesterday for the first time! I used this great tutorial by Chocolatesuze, a Sydney food blogger. Unfortunately I was a little late for Chinese New Year, but maybe next year! 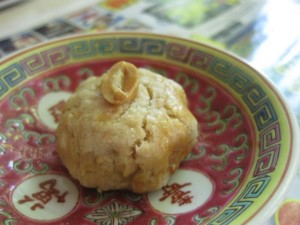 I gave some to Shaun to try when he got back from work yesterday, and while I was busy making fajitas for dinner in the kitchen, I could swear I heard giggling, yes, giggling, coming from the living room. He liked them that much! And that’s saying a lot, considering he has much experience with authentic Chinese food, and I am but a lowly American trying a recipe for the first time (I’d say kudos to the original recipe, not my execution). He liked them so much, he said, that he wanted to bring them into work and share with his colleagues to show them what a great cook his wife is (and that I should make some for his family back in Sydney sometime, too). Awwww! But wait, maybe they’re actually really bad and he’s trying to pawn them off on his coworkers? Haha, it’s unlikely, he seemed pretty excited about them and I’ll admit they were pretty darn good, too, as my first peanut cookie, anyway.

So there you have it! Today I’m looking forward to attending a panel discussion at the University of Queensland (you know, that university I plan on attending for my graduate studies sometime before I die) titled “Fantasy and Imagination: Exploring Japanese Creative Writing.” Sounds exciting! My advisor, Professor Tomoko Aoyama, will also be in attendance, so it will be nice to catch up with her again. I’m slightly nervous that the event is RSVP-only, which may mean it is very small/serious? I don’t know, but I hope I don’t make too much of a fool of myself. That or the RSVP is to ensure they have enough food/drink for the attendees, and in that case I better get a nice cup of coffee, haha. Look forward to a synopsis on Monday!

Have a nice weekend, everyone!