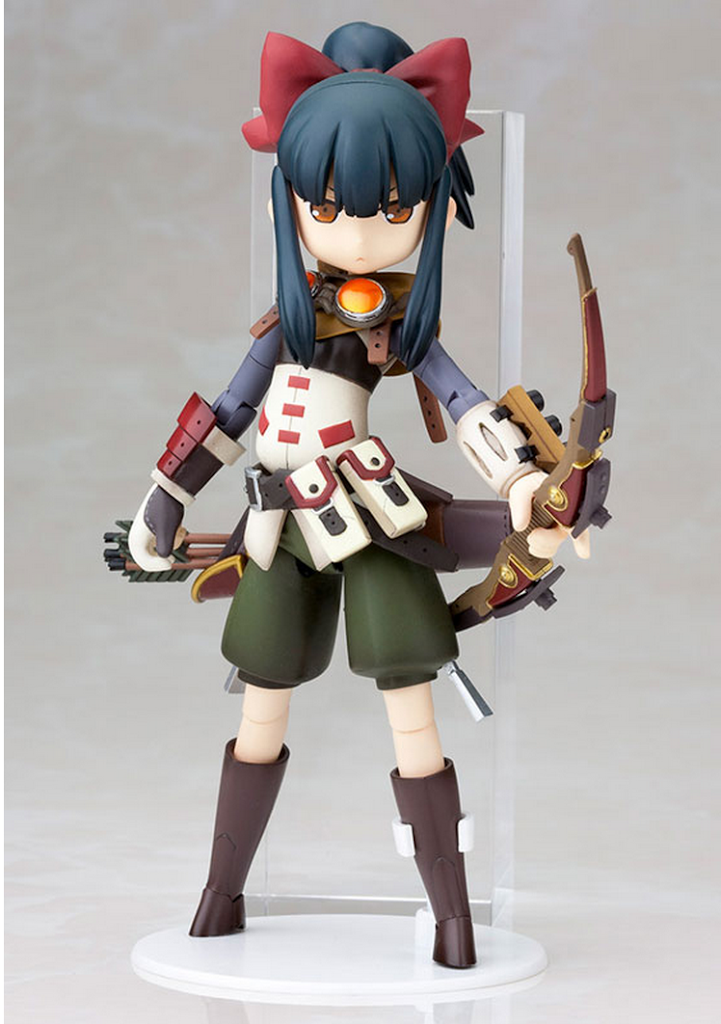 Forgive the double figure-related posts, but if you haven’t noticed already, I may be a little obsessed! And you know what’s the worst event for a new figure fan? Wonder Festival. Wonder Festival, or WonFes for short, is a bi-annual event for Japanese figure companies to show off their latest sculpts and announce exciting new additions to their catalogue. It’s a great chance to see what everyone is working on, but it’s not so great for your wallet!

As I’ve mentioned in the past, I’m not particularly interested in non-posable figures, so for the purposes of this post, I’m going to focus on newly-announced and upcoming posable figures from the company I’m most interested in as a new fan, Good Smile Company. 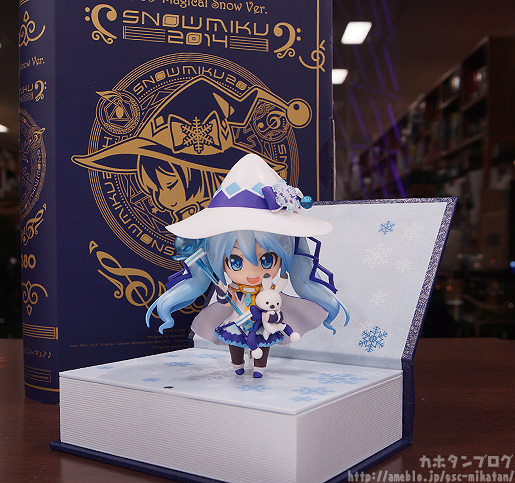 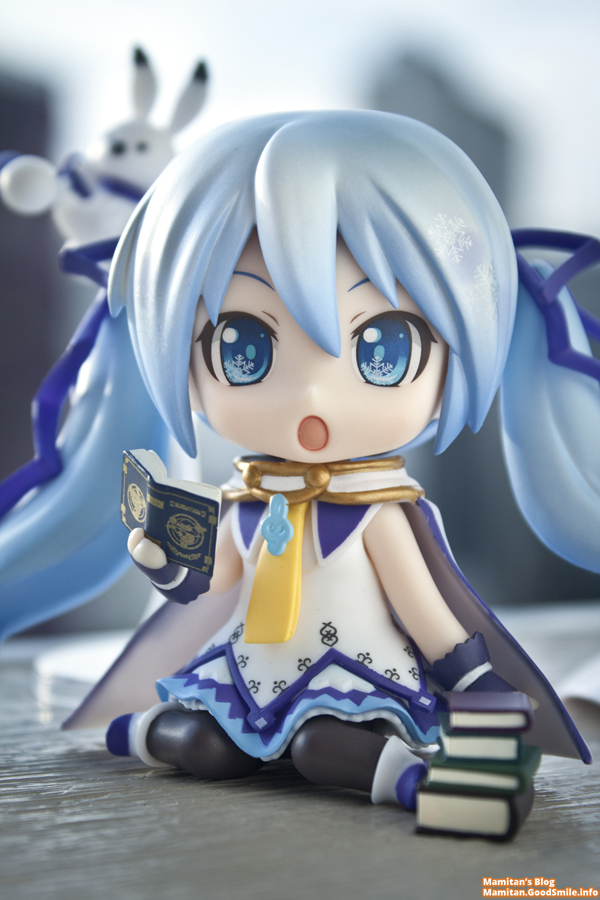 Of course, the figure I’m most excited for right now is the 2014 Snow Miku Nendoroid! The more I see of her, the more I can’t wait to get my hands on one! As you can see in the first image, she comes with her own storage book that also doubles as a display stand. Her bunny familiar, magical wand, and witch’s cap are all so adorable! I also love that she comes with a mini stack of books. Note the details in the second picture, such as the snowflakes in her pupils and the quaint design on her dress! Amazing. 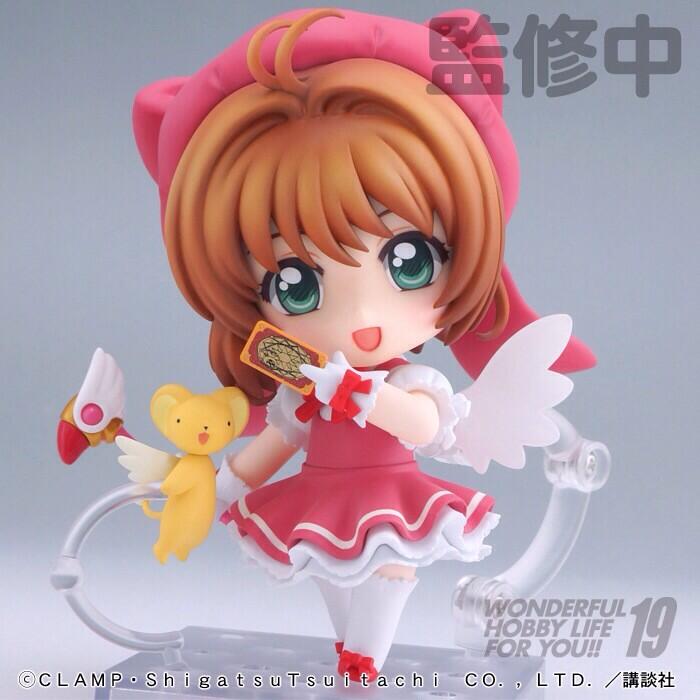 Perhaps the most exciting announcement of the day was Sakura Kinomoto (Card Captor Sakura) Nendoroid! Apparently this figure has been in the works for a while, but this is our first time seeing it, and I have to say I can’t wait to see her other facial expressions and additional parts. It’s a little unfortunate that she appears to be holding that Clow Card with her middle finger, though! 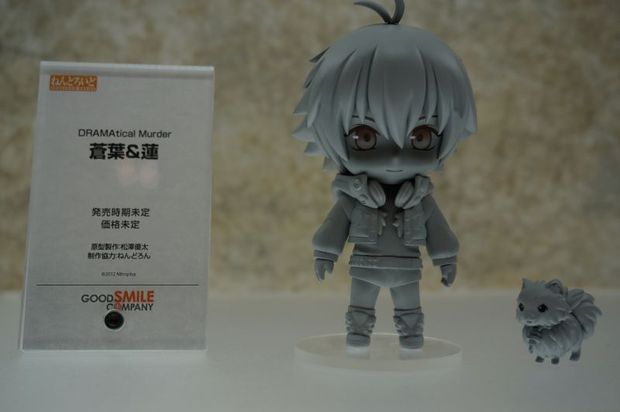 Next up is Aoba Seragaki and his AllMate (familiar), Ren, of the boys’ love game DRAMAtical Murder. To my knowledge, this is the first character from a BL to get a Nendoroid, so needless to say I’m extremely excited. I think his colorful character design will translate really well to Nendoroid form, and I can’t wait to see the painted sculpt! I hope he sells well enough to encourage more male Nendoroids, perhaps even other DRAMAtical Murder characters. 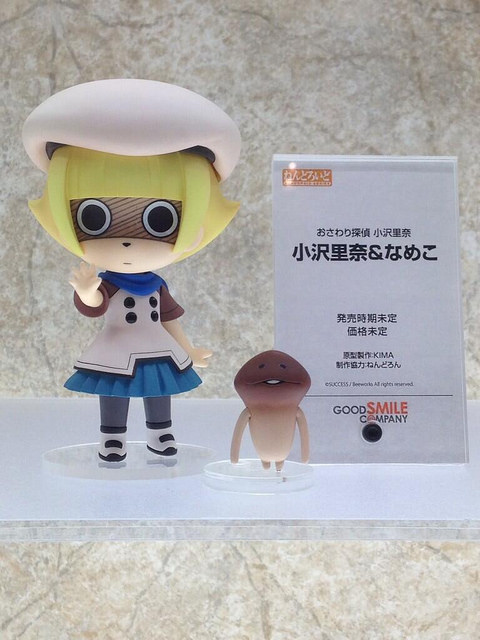 Other exciting Nendoroid announcements include some more game-related figures: Solid Snake (Snaaake!!), Wind Waker Link, and Rina Ozawa (Touch Detective), who comes with her own Funghi! While they all look like they’re going to be pretty awesome, I don’t think I’ll end up getting any of them unless GSC comes out with some really stellar accessories. I imagine Snake, in particular, though, would be a lot of fun to pose! 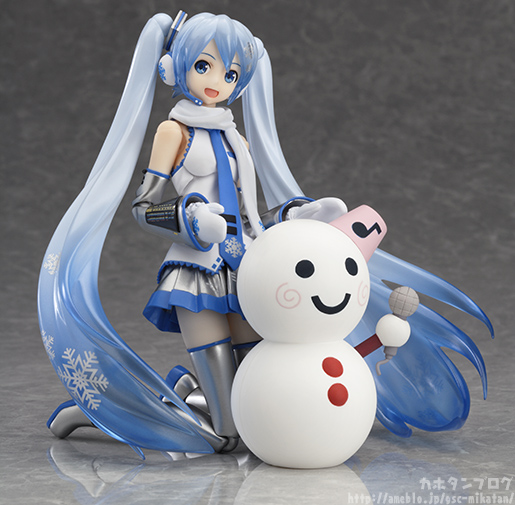 While Nendoroids are easy for me to swoon over, I’m not as quick to jump on the more “realistic” figmas. The above Snow Miku, however, is too cute to resist. I love the gradient on her hair, and the adorable snowman statue (he’s even holding a microphone!). Other Miku-related figures that caught my eye include this year’s racing Miku design and this adorable schoolgirl Miku figma (the same design is also getting a Nendoroid).

One thing’s for sure: after seeing Good Smile Company’s offerings at the first Wonder Festival of the year, I know I’m going to need to hold on tight to my wallet if I want it to make it through 2014 in one piece! What about you? Have any of these figures caught your fancy, or do you think I’m completely nuts?

For the past few years, I’ve been vaguely aware of the virtual Vocaloid idol sensation Hatsune Miku, but never thought much of her or her music. After recently starting Hatsune Miku Project Diva F and buying a Nendoroid of another Vocaloid singer, Gakupoid, I can finally say that I have more than a passing interest Miku and her Vocaloid friends.

Since the northern hemisphere is entering winter, it’s the perfect time for the annual Snow Miku unveiling! For four years, Snow Miku has been a fixture and unofficial mascot of sorts for the Sapporo Snow Festival held in February, with her adorable face adorning everything from tram cars to snow sculptures in the city in northern Japan. After fans grew frustrated with the “recycled” designs that were the first three Snow Mikus, they decided to leave her design up to the fans themselves. 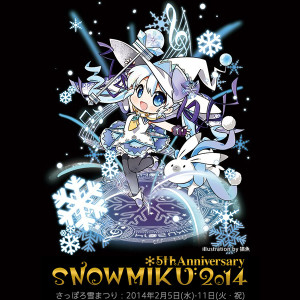 For Snow Miku’s 5th anniversary, the theme was “magical girl,” and fans ultimately decided on the witch-like design featured above. Interestingly, the Miku and animal familiar designs were created by different artists and selected separately, but I think they look lovely together! But I’m a sucker for magical girls and rabbits, it’s true.
Trams with this year’s Snow Miku design will be running through Sapporo now through March in honor of the festival. The recorded announcements on the tram were even done by the Hatsune Miku voice actress, Saki Fujita, herself! 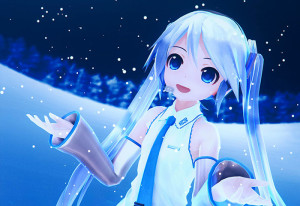 There will also be “live” Hatsune Miku performances in February featuring the 3D design pictured above. I’m not sure I quite understand the appeal of watching a projection of an anime girl singing and dancing, but it’s interesting, none the less.
Of course, the big draw for me is the exclusive Snow Miku Nendoriod that Good Smile Company will be releasing in conjunction with the Snow Festival in February. Isn’t she adorable?! 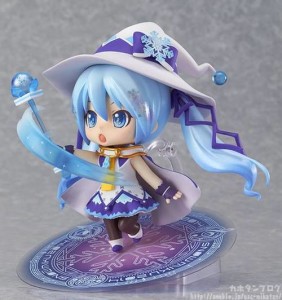 Usually Nendoroids come with a variety of facial expressions, posing options, and accessories. Here it looks like Miku is performing some kind of magical attack. I love the detail put into the base!

Of course, it’s not all about Hatsune Miku. Her other Vocaloid friends have gotten some festive designs, as well… 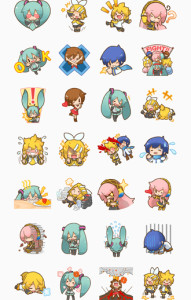 The free texting app LINE has even released some new Vocaloid stickers, though they’re not in celebration of the Sapporo Snow Festival in particular. They’re not only available for the Japanese version of the app, but the North American version, too, so if this post has made you just a little Miku crazy (like me), they may be able to satiate you!