I had a lovely, in-depth post all ready to go about my impressions of Atelier Rorona so far, but since it was such a meaty piece I decided to hold onto it and develop it into a full-fledged review for www.videogamewriters.com. I’ll probably chop it down and do a shorter version for this blog later in the week, after I’ve played a bit more of the game (I’m about 1/3 of the way through at the moment).

Nevertheless, I have quite a few things I could say about Atelier Rorona, so I don’t really see the harm in making two posts about it! I thought I’d share with you all some of the weird stuff I’ve come across in the game so far. Before you read on, keep in mind that I am seriously enjoying this game, so while the following quibbles may bug/slightly disgust me, it certainly isn’t detracting from me having more than a little fun synthesizing item upon item and meeting all the request deadlines.

First thing’s first, here’s a quick rundown of the game: Atelier Rorona follows Rorona, an apprentice alchemist under a woman named Astrid at a workshop in the kingdom of Arland. The king of Arland has decreed that unless Astrid can complete 12 assignments given to her over the course of 3 years, the workshop will be shut down. Astrid, being more interested in napping than doing anything the king asks of her, passes the task on to Rorona. Right now I’m just over a year in, and the combination of expertly-voiced story sequences, adorable artwork, catchy music, countless items to synthesize and requests to fulfill is definitely keeping me busy. 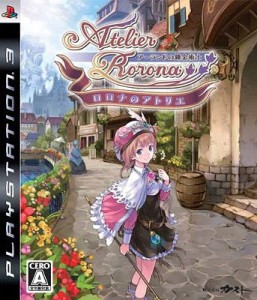 Creepy observation #1: It’s more than a little obvious that this game caters towards a certain type of male-dominated Japanese nerd culture, and I was well aware of this when I started playing the game. What I didn’t know is how much creepy innuendo was going to be a part of the game’s humor! A lot of the story features older women more or less hitting on Rorona, and while I know that’s a cultural thing to a degree (nothing wrong with a 20-something woman calling a 14-year-old girl cute, I guess), sometimes it gets a bit out of hand. Alright, ok, I know what I was getting myself into, so I won’t say much more about this (to each his/her own), but how about:

Creepy observation #2: Some of the female characters are more than a little well-endowed for their age. I usually file these observations in the back drawer, except for when those in charge of the character models deem it appropriate to animate one of said character’s bobbing breasts even when she is standing still. Good thing for me I don’t really like said character very much and as such will probably not make her a member of my party very often, but seeing her undulating chest in every single battle is as much a turn-off for me as any.

Creepy observation #3: I’ve saved you the best for last. Last night when I was playing, I was happily introduced to my new workshop assistant, who was created for Rorona by Astrid using alchemy. Ever-curious and eager to learn, Rorona does some research into the recipe that was used to create Hom, the homunculus assistant. Ingredients include horse droppings… And in the case that horse droppings aren’t available, the use of human semen is said to also be possible. Let me reiterate that for you. The recipe that was used to create Rorona’s assistant calls for horse droppings and human semen. Just what sort of game is this?!?

Even though I’m enjoying poking fun at the game, I’m honestly having even more fun playing it. It’s just the right recipe of pretty visuals, lighthearted story, and engrossing gameplay for me, and these weird, uh, quirks make it all the more the odd yet engrossing experience. I have a feeling this isn’t going to be the end of my creepy observations, though… I’ve still got 2 years of game time to go!