So, what if I told you I was spending my Saturday evening in an internet cafe with my husband? What if I also said he was playing DotA (yeah, people still play that…) while I was downloading oodles and oodles of games (on Steam, legally, of course)? I bet you’d think we were the coolest cats you ever laid eyes upon… Right?
Anyways, on to more interesting things… It’s a little-known fact that NIS America, the publishing company well known for localizing the Disgaea series and the many varied Atelier titles also dabbles in anime. Their most recent anime-related announcement is close to my heart because it’s none other than a Natsume Ono series (you migtht remember the post I did recently on one of her manga one-shots). 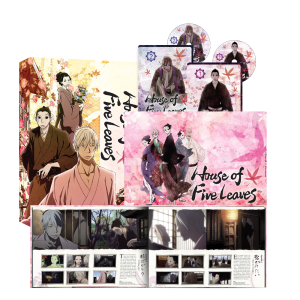 This ﻿House of Five Leaves complete series collection is just gorgeous, in my opinion. Not only do you get the whole series on 2 DVDs, but you get an art book, as well! If you’re unfamiliar with the series, here’s what NISA has to say about it (since I’m not feeling very creative this Saturday night):
“House of Five Leaves follows a story of a ronin Masanosuke, working as a bodyguard in Edo. Because of his shy personality, he kept being let go from his bodyguard jobs despite his magnificent swords skills. While he was wandering around town he met a man, the playboy who calls himself Yaichi. He hired Masanoseuke as his bodyguard. Masanosuke soon finds out that Yaichi is the leader of a group of kidnappers who call themselves the ‘Five Leaves.’ The story unfolds as Masanosuke deals with his dilemma and the suspense surrounding the Five Leaves.”
I watched about half of the series streamed online a while back, and I have to say I really liked what I saw. For those of you really into action and like things fast-paced, this show probably isn’t for you, but fans of Natsume Ono or those looking for something a little different should definitely consider giving it a watch. I know I, for one, will be eagerly awaiting the premium edition’s launch in March!