It’s a bird! It’s a plane! It’s another episode of Chic Pixel Plus! To the surprise of everyone, including me, I’ve managed to get the second episode of my new podcast out the door on schedule. Sure, considering I called the first episode the pilot this technically is only episode one, and I managed to completely botch my opening and closing remarks, but we all have to start somewhere, right?

This week I’m joined by Matt Sainsbury of DigitallyDownloaded to discuss a particular niche of Japanese games often dubbed “otaku games.” Together, we hash out what makes these games appealing, why they tend to have a bad rep outside Japan, and what our favorite otaku games are. Of course, with the recent Xbox One reveal, we couldn’t help but add some of our thoughts, and I took the time to gush about the recent Guilty Gear Xrd -SIGN- announcement. Even if you’re not a fan of otaku games, be sure to tune in – you might learn something new!

This time around I used a different program to record the audio, and unfortunately I don’t think it turned out as well. Since I’m still getting the hang of all this, your feedback would be greatly appreciated!

As you may know, I’ve dabbled in the realm of video game-related podcasts for a while now. I’m a cohost of the Nichiest Podcast Ever with shidoshi and Bryan, I’ve appeared infrequently on the Video Game Writers podcast, and I even made a guest appearance on the latest Gaymebar function. But, while I love chatting about video games, I’ve long felt that there aren’t many good podcasts out there that conduct discussions on a variety of Japanese entertainment, particularly anime/manga and games. 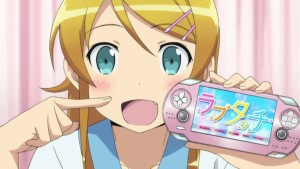 So, what’s a blogger to do? Start her own podcast, of course! My latest endeavor, Chic Pixel Plus, will act as a kind of supplement to this blog, and in it I hope to discuss all manner of fun Japan-related things with each of my bi-weekly guests.

On this week’s pilot episode, I’m joined by special guest Elliot Gay of Japanator and the Red Sun Gamer podcast for a discussion of Kyoto Animation’s newly-announced anime Free!, what spring season anime we’re watching, and a few video game-related tidbits including a discussion of just what is up with Compile Heart’s Fairy Fencer F, old-school Ys, and the 3DS eShop game Crimson Shroud. We also get our fangirl on over a rather interesting obsession… Japanese GBA games boxes!

If that sounds up your alley, please give the episode a listen below! You can also download it directly onto your computer, if you prefer, or even manually subscribe on iTunes by adding the RSS feed.

Since this is my first time recording and editing a podcast, I’d really appreciate your feedback! Is the sound okay? Are the topics interesting? Do I say “um” too much? Please let me know what you think, and look forward to a new episode with a different guest in two weeks!