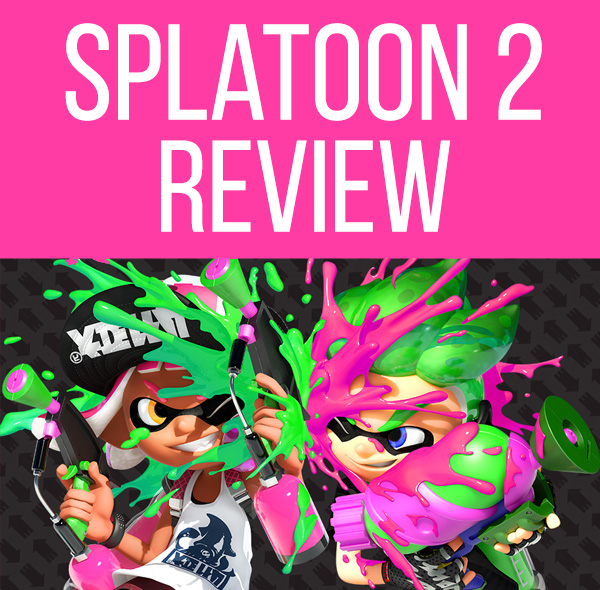 In many ways, Splatoon 2 feels like the game Splatoon should’ve been when it first came out. On launch day, Splatoon only had 5 maps and no ranked mode, though additional stages were added in subsequent weeks. Stages rotated every 4 hours, which meant that if you had a couple of hours to play after work on a weekday, you may have only been able to play one set of stages on any given day. While critiques such as these didn’t ruin my overall enjoyment of what was otherwise an explosively fun game, Splatoon did feel a little like it was launched a couple months early. 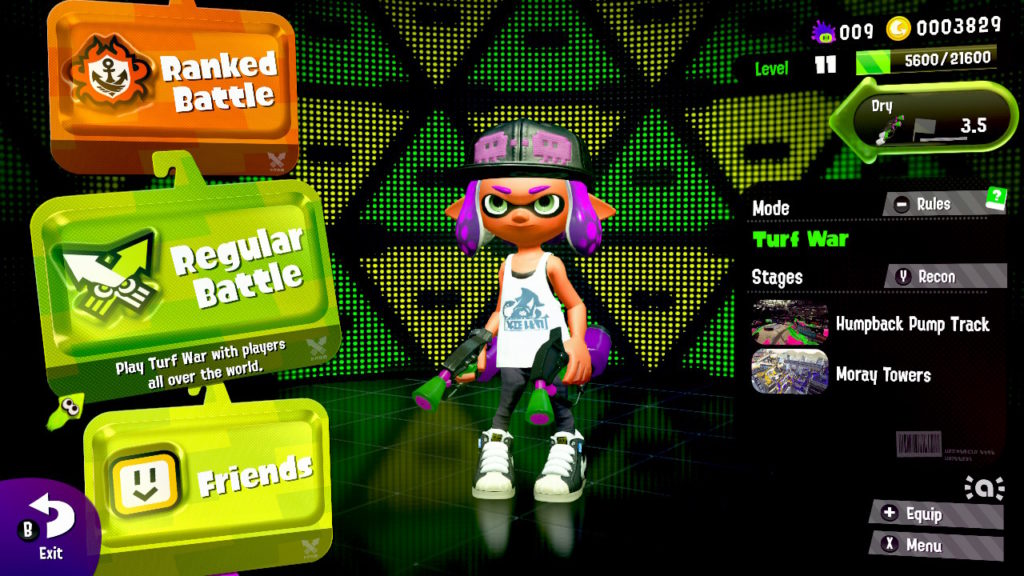 Meanwhile, Splatoon 2 came loaded with a plethora of maps, weapons, and even a new co-op mode from day one. Though it has largely left the fundamental ink-based shooting the original game presented the same, it feels like the game Splatoon should’ve been at launch. Luckily, this time around it’s on a system with a well-established fan base that will only grow in the upcoming months! I’m really glad that the Switch is seeing a Splatoon sequel so early in its life, rather than a port, so both newcomers and fans of the original have plenty to enjoy.

Just like the original game, Splatoon 2 offers a fun single player campaign to help teach you how to play and give you something to do when you don’t feel like jumping into the multiplayer. If you’re not familiar with how Splatoon plays, it’s essentially a third person shooter where your character shoots colorful ink to both cover the playing field and take out enemy players. Not only that, but you can transform into a squid and disappear into ink that is the same color as the ink you’re shooting for faster movement speed, climbing walls, and other sneaky advantages! 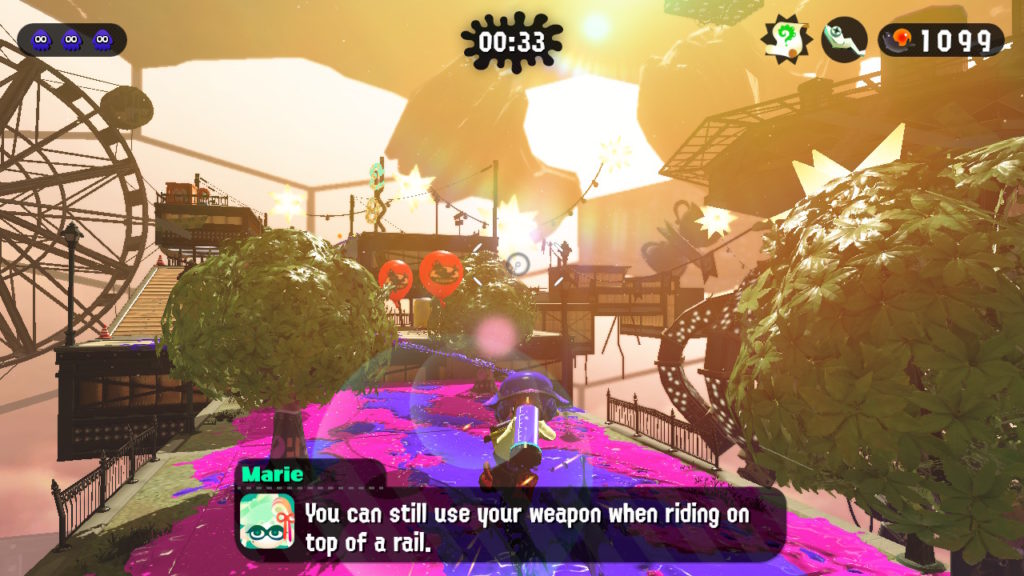 It’s easy to overlook the single player mode when multiplayer matches are so much fun, but doing so would mean missing out on a great aspect of the game. Splatoon 2‘s single player levels aren’t particularly long, but they contain a lot of twists on the game’s ink-based shooting formula for plenty of awesome “aha!” moments. As with its predecessor, Splatoon 2‘s single player mode has amazing music, level design, and boss battles that fit right in with other Nintendo classics. While some things make a reappearance from the original Splatoon, such as enemy types and music tracks, the story mode is most definitely not a simple rehash of the first game’s.

Though the single player campaign will provide many hours of fun, especially if you replay the levels using different weapons and try to collect all the hidden items, the bulk of Splatoon 2‘s appeal is in its multiplayer modes. Turf wars features 4v4 matches that require you to ink as much ground, or turf, as you can within 3 minutes, while ranked matches, which unlock after you’ve reached level 10, have three additional modes: rainmaker, splat zones, and tower control. Rainmaker has a special weapon called the rainmaker which must be carried as far into enemy territory as possible, while splat zones require you to occupy a certain area on the map. Finally, tower control somewhat combines the two previous modes by featuring tower that you must ink with your team’s color to advance it as far as you can into the enemy’s zone.

Most of my time with the game has been spent in turf wars, mainly because I’m not coordinated enough to every do very well in the ranked modes! That’s why I especially enjoy Splatoon 2‘s entirely new co-op mode Salmon Run, a horde-like mode that you can play with others both online and locally. I’ve never played anything resembling a horde mode before, but the basic premise is that you and up to three companions are assigned one of four weapons to take out wave after wave of enemy Salmonids and collect their sweet, sweet eggs for a slightly creepy talking grizzly bear statue named Mr. Grizz (if he looks familiar, it’s because he’s based off an iconic Hokkadio wood carving of a bear and salmon!). 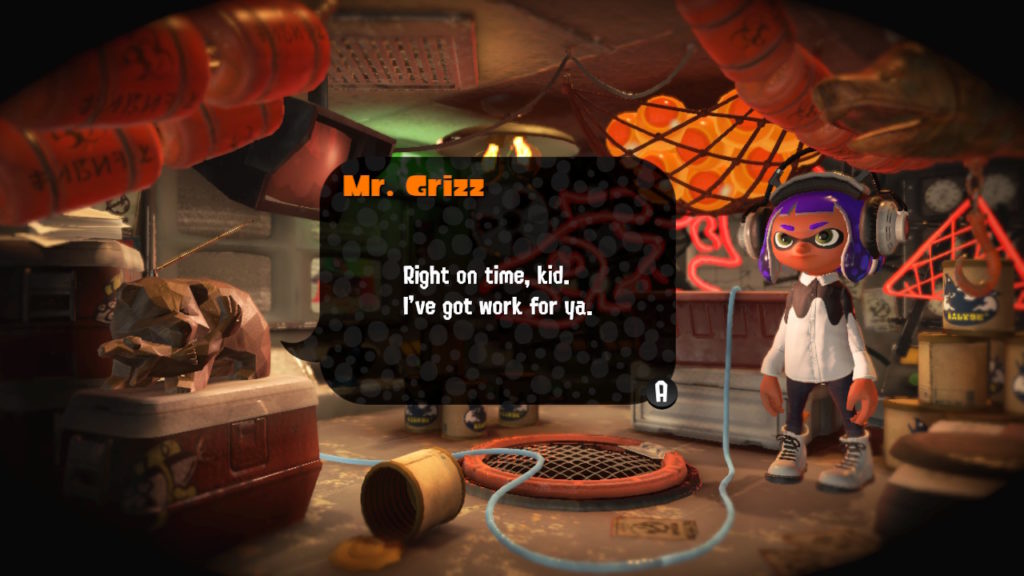 My favorite aspect of Salmon Run is the sheer amount of variation between games. Sometimes the map will be covered in fog, making it more difficult to see, or it will be nighttime and tons of little Salmonids will come streaming out of the water in droves. There are seven different types of boss Salmonids that each must be dealt with in specific ways, and if and when they spawn is entirely up to chance. This, combined with the fact that you’re forced to play with different weapon every time, means you’ll need to be resourceful in order to make it through all three rounds unscathed. I’m surprised at how much I find myself playing it! 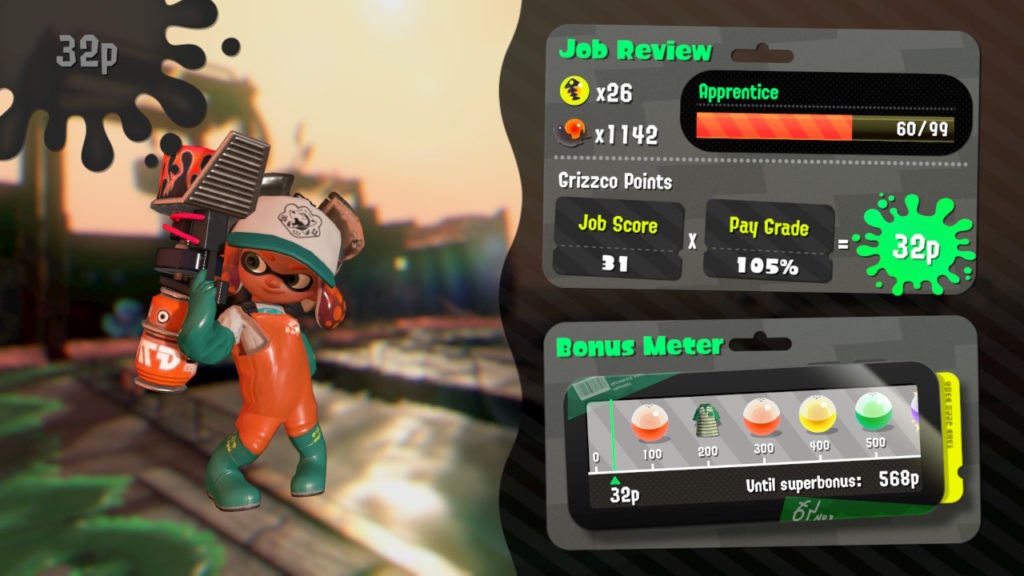 But I can’t go any longer without talking about my favorite aspect of the Splatoon games: the fashion! There are even more clothing options this time around, and both male and female inklings have multiple hairstyles and leg wear to choose from for a little more variety in your inkling’s appearance. The old and new Splatoon amiibos have a selfie feature that allows you to pose your inkling with one of the amiibo characters, and it’s honestly one of my favorite new additions in the game (though as an amiibo feature, it technically would be DLC). Everything looks so crisp and detailed on the Switch, too! Plus, the Nintendo Switch’s capture button makes it easier than ever to take screenshots and share them on Facebook and Twitter. It’s shallow, I know, but I could spend hours just taking photos of different outfits!

Unfortunately, Splatoon 2 retains many of the issues I had with the online multiplayer in the first game. Now, however, these frustrations are heightened by the fact that I also play Overwatch, so I know what it’s like to be immersed in an online multiplayer ecosystem that doesn’t have all of Splatoon 2‘s weird restrictions!

Most notably, Salmon Run, the most exciting new addition to the game, isn’t even available to play online all the time. Luckily I don’t often find myself desperate to play when it isn’t available, but it’s a shame none the less. Some people may also find it annoying that the stages are still on a rotation, though the stages now change every two hours instead of four. In addition, I still think it’s needlessly difficult to group up with a friend in turf wars, and you can’t choose to only play on the same team with them unless you host a private battle.

And don’t even get me started on the separate voice chat smartphone app! Having to jump through hoops to use voice chat isn’t something that personally bothers me since I don’t think turf wars requires voice communication, but these various “quirks” of Splatoon 2‘s online experience are likely to become significant issues for anyone who is serious about competitive multiplayer gaming.

The truth is, however, that regardless of how odd I think some of the decisions Nintendo has made about Splatoon 2‘s multiplayer functions are, the core game is still unbelievably fun to play, listen to, and look at. It may be cliched to say, but in a world where hatred and violence is all over the news and saturating the media we consume, I’m extremely grateful for this colorful little series that pits squid people against one another in battles waged entirely with ink. Splatoon 2 is a must-have for every Nintendo Switch owner, and is likely to be a highlight for the system for years to come (or until we see Splatoon 3, at least!).

A code was provided by Nintendo of Australia for the purpose of this review. If you decide to pick up a copy of the game, using my Amazon affiliate link will earn me small commission that goes back to keeping the site running. Thank you for your support!