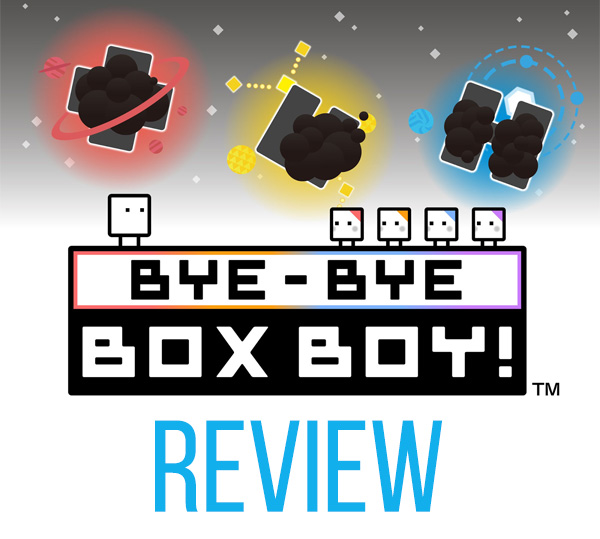 After 2 installments in the BoxBoy series, the box with legs Qbby is back for his last hurrah in Bye-Bye BoxBoy!. Available for just $7.50 AUD ($4.99 USD) on the Nintendo 3DS eShop, Bye-Bye BoxBoy!‘s clean-cut presentation and bite-sized puzzles make it the perfect game to fit in during a commute or while unwinding on the couch after a long day. 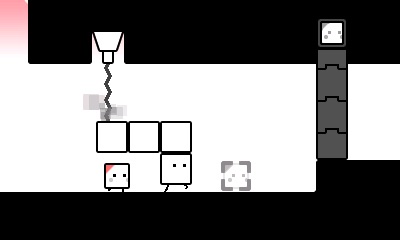 Despite the fact that I’ve never played any of the previous entries, I was immediately drawn in by the game’s striking black and white art style and minimalistic presentation. There’s no exposition here: from the second you boot up the game for the first time, you’re immediately placed at the beginning of a level for some 2D puzzle platforming fun. Aside from some brief tutorials and menus, there is no text in the game at all, which means you move at a snappy pace from one puzzle to the next. While I can appreciate a puzzle game with a good whacky story à la Puyo Puyo Tetris, it’s refreshing to play a title that is so narrowly focused on getting you to the gameplay.

The game’s core mechanic centers around Qbby’s ability to create boxes and use them traverse each level. By holding down Y and pressing a directional button, you can spawn boxes off Qbby in a variety of formations and either place them directly in the level or have Qbby’s body itself travel to the end of the chain of boxes. I’m not sure I’ve explained that very well, but hopefully this gif will give you a better idea:

As I mentioned, I haven’t played any of the previous Box Boy! games, so it took me a little while to get used to the controls and put myself in the right mindset to solve the puzzles Bye-Bye BoxBoy! presented. I was very thankful for the ability to unlock hints when particularly stuck (using Play Coins, aka those things you earn on your 3DS just from walking around), and the fact that an untimely would only send me back to just before my last mistake, rather than the beginning of the level. If you’re a puzzle game aficionado or familiar with previous BoxBoy! titles, you may find Bye-Bye BoxBoy! to be on the easier side, but for me, it was the perfect difficulty for my fried brain at the end of a long day. 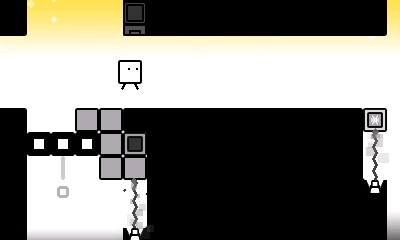 Bye-Bye BoxBoy! is broken into 4 planets, each with 8 worlds. There are a variety of new abilities for Qbby to learn that keep things fresh, as well as some friends to guide and help you through the levels in the form of Qbabies. Luckily, the game is short enough that you never feel like you’re stuck with any particular gimmick for too long. Though I played through the game leisurely over the course of a week or so, you could probably spend a couple of hours in a single session to play through all the levels Bye-Bye BoxBoy! has to offer, especially if you’re good with puzzle games.

Those looking for a little more content will find some in the two challenge worlds that unlock once you beat the game, as well as a variety of unlockables, including additional challenges, costumes, music, mini comics, and the ability to scan the Kirby amiibos to get even more costumes in the game (it is the same developer, after all!). Each level also contains one or two crowns that that disappear after a certain number of boxes are used, so it takes a little extra finesse to collect everything. 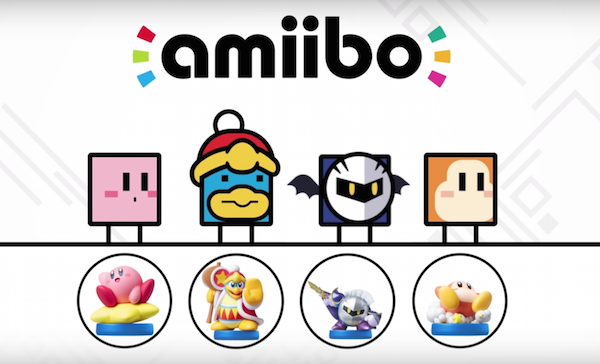 If you’re looking for a no-frills, solid puzzle platformer to unwind with, I would highly recommend giving Bye-Bye BoxBoy! a shot. While I don’t know if it offers much in the way of new content for fans of the series, I loved the simple yet endearing presentation and moderately difficult puzzles that didn’t make me feel like too much of an idiot. It may not be a game you keep coming back to long after you complete it, but it makes the prefect bite-sized eShop release. If you want to give it a shot, there is a BoxBoy! series demo available on the eShop, which contains a selection of levels from the BoxBoy trilogy of games.

A code for this title was provided by Nintendo of Australia for the purpose of this review.