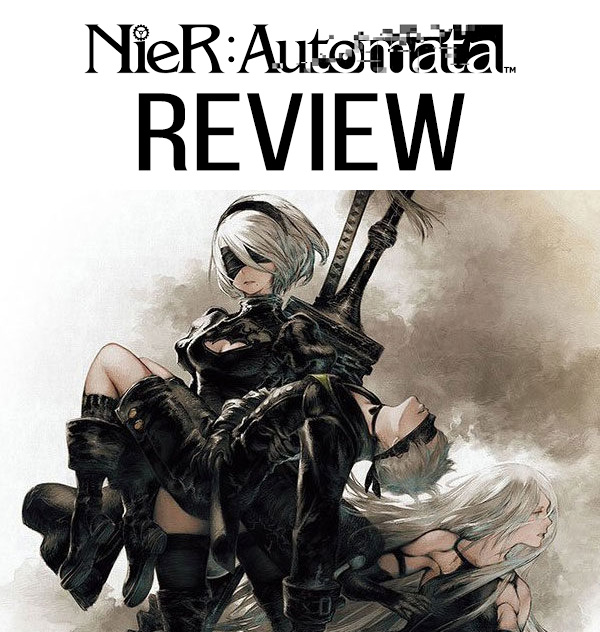 Despite having put over 45 hours into NieR: Automata, I still can’t believe it exists. Director Yoko Taro has become something of a niche gaming icon over the years, but due to some very, very rough edges, NieR: Automata‘s predecessor NieR only achieved a small cult following among the few who saw past the subpar gameplay and lackluster graphics to appreciate its atmosphere and heavy-hitting themes.

I fall in the camp of folks who saw what NieR had to offer in terms of an overall experience, but always left my short sessions with the game infuriated by the miserable gameplay. It was clear to me that Yoko Taro had a lot of great ideas that would shine if he only had a just few more resources at his disposal… And lo and behold, those resources have finally come in the way of Platinum Games, a development studio that excels in smooth-as-butter action gameplay!

I had every intention of finishing NieR before moving on to Automata, despite being assured that the stories would not be connected in any significant way. In fact, I wasn’t even going to pick up NieR: Automata on launch, but when I saw how well the Japanese release was being received, I promptly set aside my 15 hour NieR playthrough and watched a story recap so I would at least be somewhat up to speed on any references there might be in Automata. 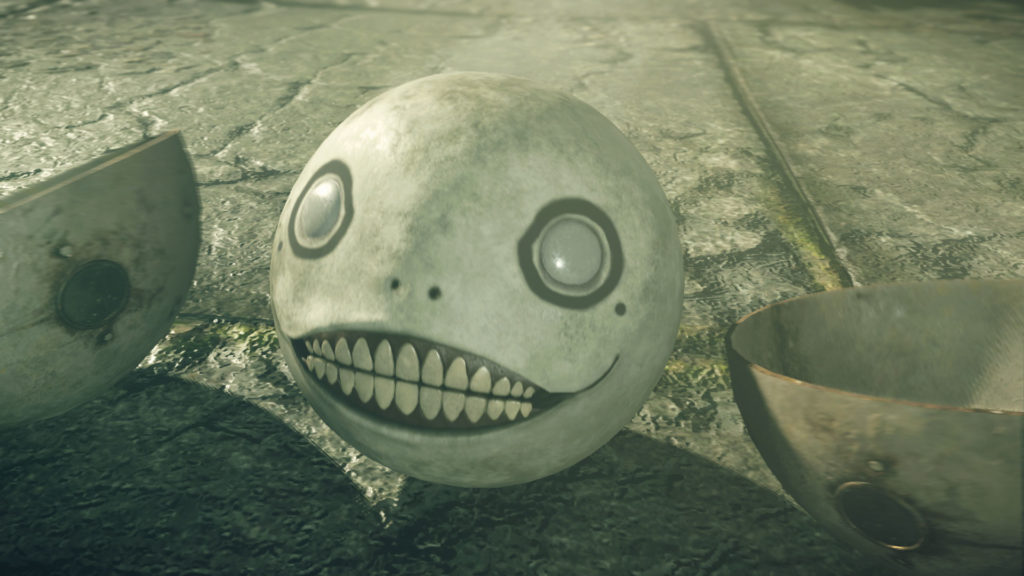 It’s true that NieR: Automata doesn’t have any major story connections to the events of NieR, and I believe that’s one of the reasons why it’s doing so well. There are references that go back as far as Yoko Taro’s directorial debut Drakengard for dedicated fans to appreciate and dissect, but NieR: Automata also works perfectly well as a stand-alone title. In fact, newcomers will likely find themselves wanting to go back and see what NieR has to offer after finishing Automata – I know I definitely do, despite the fact that I’ve already “spoiled” myself on the major plot points!

NieR: Automata works so well as a separate entity because it takes place on Earth thousands of years after the events of NieR. The last remnants of humanity have been driven to the moon by aliens who have now overrun the planet with their army of machines. Humanity’s last hope are special combat androids called YoRHa who wage war against the machines, and that’s what you’ll be doing in NieR: Automata… at least to start.

I’d like to keep my discussion of NieR: Automata‘s story vague for now (if you’d like to jump to my spoiler thoughts, feel free to scroll down), because I feel that Automata is the kind of game that should be played with as little information going in as possible. That says a lot coming from me, as I generally don’t mind spoilers! But after inadvertently gaining some context for ending E before I played through it myself, I can confidently say that NieR: Automata plays with conventions and player expectations in such a way that it packs an even bigger punch if you don’t already know what’s coming. 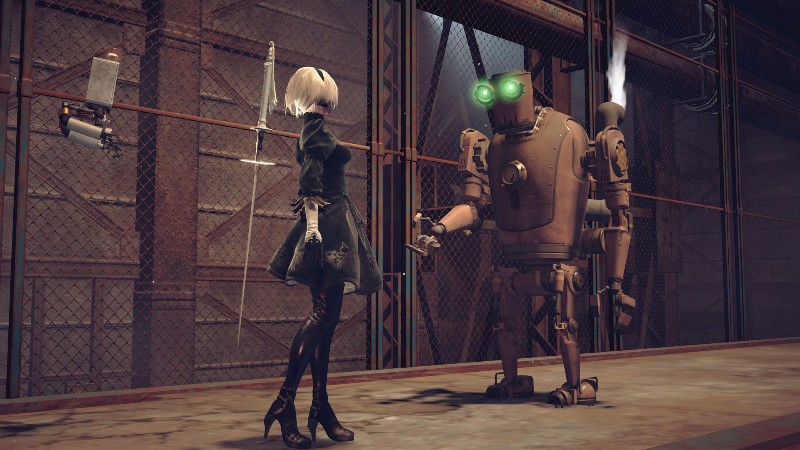 Right in the first several hours, NieR: Automata makes you question what you think you know about the world of the game. Aren’t the machines the villains? If so, why are they so… cute? If you’re familiar with sci-fi, a lot of the themes regarding AI, consciousness, and what it means to be “human” aren’t exactly new, but NieR: Automata eases you into the difficult topics it addresses while also slowly getting you attached to the central cast of characters so it can really drive the knife in in the second half of the game.

And while I don’t think the game made me quite as emotional as some, I always found myself thinking about it when I wasn’t playing. Even now, over a week after completing all the major endings, I’m still thinking about it. It’s a major bummer in a lot of ways, so if you don’t feel in a good place for some Sad Stuff, it may be worth holding off until you are.

Luckily, NieR: Automata has implemented difficulty settings and combat aids to help players of all skill levels so it’s possible to play just for the story and not worry if action gameplay isn’t your thing. But if you’d prefer not to breeze through the combat, rest assured it’s much improved over NieR, and I was able to play through on normal and have a very fun time slashing through enemies as the acrobatic 2B. The gameplay being as good as it was is the reason I ended up spending so much time with the sidequests – not only did they provide a lot of interesting insights into the world that you don’t get from the main story alone, but I actually enjoyed fighting the machines… despite feeling a little bad for them at the same time. 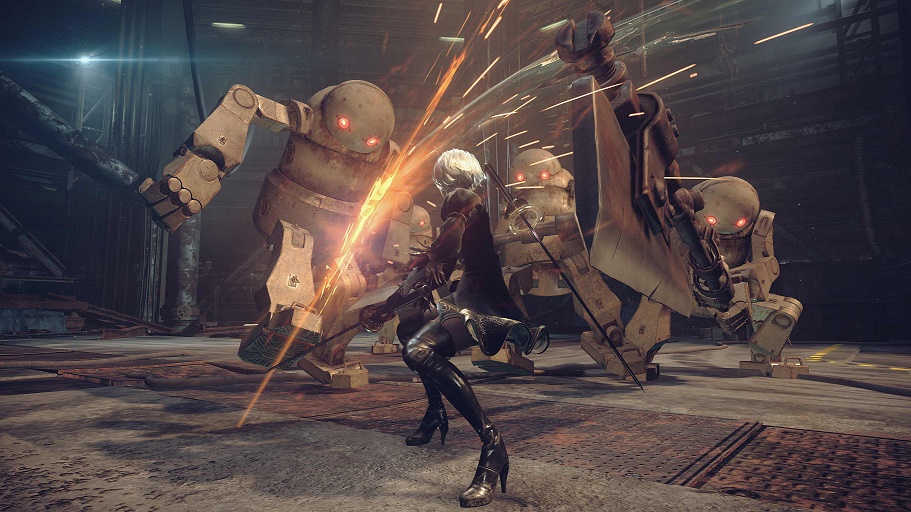 Despite NieR: Automata‘s flashy combat, it was definitely not the main reason I stuck with the game through its 5 main endings. You’ve probably heard that you need to beat the game multiple times to get the full experience, and while it is true that you’ll be sending the credits at least 5 times, I would urge you to think of each ending as something more like a route in an otome game, where one playthough only offers a slice of the full story the game has to offer. Though the game does feel like it drags on in a few places, overall there are enough new, interesting story and gameplay elements to keep it fresh though the 40+ hours it will likely take you to play through it all.

Over the course of the game’s multiple playthroughs, I felt myself drawn further and further into the bleak future depicted in Automata and the plights of the various characters. The gorgeous music definitely helped – I loved it so much, in fact, that I bought the soundtrack! The game has stuck with me so much, though, that I can’t help but feel sad when I listen to it. Talk about leaving an impression!

One other aspect of NieR: Automata that I really loved was how it plays with the actual framework of the game itself. Game menus, combat controls, save points… none of it is safe from the developers! Unfortunately, there are a few instances where these sequences overstayed their welcome for me, and my awe at what the developers were trying to achieve turned into frustration. These instances weren’t major, but I feel they could have been better if the extended gameplay sequences didn’t get in the way of the emotional impact. 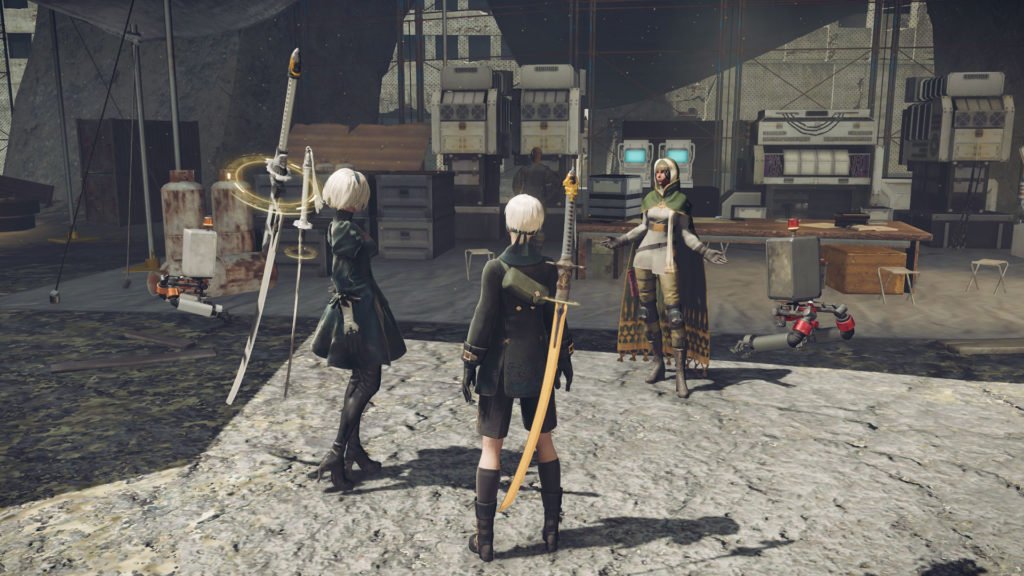 The only other main complaint I have is that despite the game being completely single player aside from the optional ability to retrieve other people’s dead bodies for bonuses in combat, the final ending is virtually impossible to see without connecting to the internet. I know that in this day in age it’s likely not an issue for most people, but there are certainly those out there who can’t easily connect, and honestly shouldn’t have to for a game that can otherwise be an entirely offline experience.

While I can’t say I didn’t have some frustrations with aspects of the game, NieR: Automata is without a doubt my favorite game of the year so far, and will remain one of my favorite games for years to come. I’d like to end with a few more detailed thoughts, but if you’re certain you’d like to pick up the game (and you should!), please don’t read past the spoiler warning so you can go in fresh!

If you decide to purchase the game from Amazon, it would really help me out if you could use my affiliate link – all commissions I make from affiliate sales go back toward helping run the site. If you plan on getting it elsewhere, or already have a copy of the game and still want to give back, you can buy me a coffee to help me get through the last two months of my thesis! Your support is greatly appreciated! 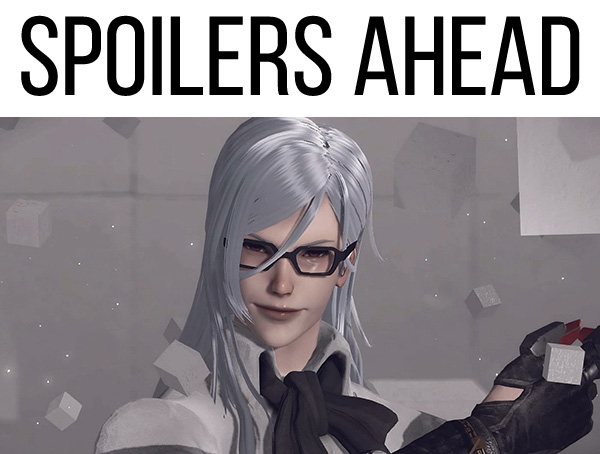 Now that it’s just me and those of you who have finished the game (or just really like spoilers), I can get a little deeper into my thoughts about the game! Mainly, I was extremely frustrated by the sequence where you play as 2B as she is trying to make her way across the bridge after she contracts the virus. This section was very powerful emotionally, especially with how the gameplay and menus were effected by the progressing virus, but I felt like it was far too drawn out. The first time I played it I had such a hard time walking through the environment that I fell down the hole to the cave in the center of the city… and was not able to climb back up. I ended up limping around the cave area until 2B was completely corrupted by the virus. Unfortunately, playing through it a second time drastically lessened the impact of the sequence for me, and by the end I was just happy I got through it.

The other instance of drawn-out gameplay that I mentioned earlier was the end credits sequence that leads to ending E. Again, I understood the intent and initially was moved by how you’re literally destroying the creators of the game, but it was so long that my thoughts eventually went from “wow this is cool!” to “how much longer?!” It didn’t help that I wasn’t initially connected to the internet when I played through it, so I tried to brute force my way through without the assistance of other players.

I hope that gives a little more clarity to the issues I was talking about earlier in my review, but again, they weren’t things that impacted my experience so greatly that I would change my overall very positive opinion of the game. Other things I particularly loved about NieR: Automata that I didn’t want to mention earlier in case it colored some people’s experience of the game include the very nonchalant way it deals with gender and sexuality (though I do wish it went a bit deeper into these things, like how the machines formulated their personal concepts of gender…), 9S’s and 2B’s relationship, and 9S’s slow descent into madness over the course of the game.

There’s a million more things I could say about NieR: Automata, and there are still some things I’m trying to work out about the plot in my head (the whole bit with the red AI girls, for example…), so if you want to chat about any other specifics, feel free to share your thoughts in the comments. Just be sure to put a spoiler mark on your comment so others don’t accidentally read anything that might ruin their playthrough of the game!