Monster Hunter X is most easily described as Monster Hunter “all stars,” as it is a crossover of towns, characters, areas, and monsters from previous games in the series. Since I only played a few hours of Monster Hunter 3U before finally jumping in whole hog with Monster Hunter 4, much of what is presented to me in Monster Hunter X is entirely new. What will be new in this installment regardless of one’s familiarity with the series, however, are the multiple hunting styles: guild, striker, aerial, and bushido.

Each has different attack combinations and different skills available to equip (also new to Monster Hunter X), but in all honesty, I haven’t spent that much time with each individual style yet! My go-to weapon in Monster Hunter 4 was the hunting horn, so I immediately had to try it out with the various styles, but I was quickly drawn to aerial. As the name implies, aerial allows your character to spend more time in the air by giving you the ability to vault yourself into the sky with the simple press of a button. While this ability was previously limited to the insect glaive, hopping around with a large musical instrument has definitely been one of the highlights of Monster Hunter X for me! 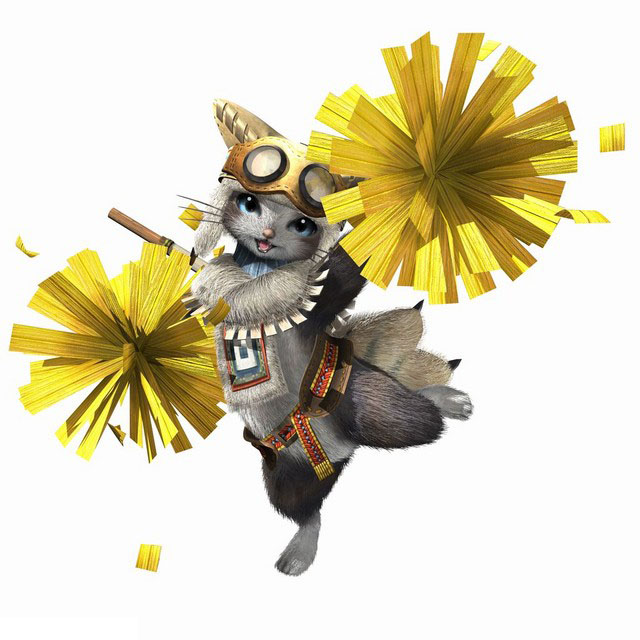 The other highlight is, of course, Nyanta. For the first time ever, you can play as a felyne! Expanding on the palico partners from Monster Hunter 4, X allows you to take control of them directly. Unlike a regular hunter, a Nyanta can’t use items, skills, or choose between the different styles, and has the same weapons and armor as palicos. But of course, there are benefits! Nyantas don’t have stamina gauges, aren’t affected by temperature-related status effects, and have unlimited nets and pickaxes, making them great for gathering. Their stature and speed makes them great for dodging attacks, so even though their raw attack power may not be as high as other hunter weapons, it’s possible to dart around and get in lots of attacks.

And you’ll need to attack a lot as a Nyanta, as doing so will fill a gauge that activates abilities ranging from healing horns to Nyanta-specific attacks. Depending on the tendency of the felyne (charisma, heal, assist, etc.) it will have different abilities to equip, which take the place of items and hunter skills in battle.

While I was originally worried that the Nyanta would feel basic in its moveset compared with the established weapons, the various tradeoffs make it really fun and exciting to master. I’ve actually spent about 20 of my 24 hours with the game so far playing as a Nyanta! Its support abilities make it a great addition to any multiplayer hunter team, and I’ve been having no difficulties getting through the single player village quests as one, either.

It’s easy to be positive about Monster Hunter X, but I do have some minor complaints with the presentation. The introductory monster cutscenes are all but gone, and the game does not even attempt to hide the fact that it’s a smorgasbord of quests with no real narrative thread between them. Of course, Monster Hunter is not a game that’s known for its story, but the world building present in 4 is pretty much gone in X.

Those complaints aren’t major enough to tarnish my experience, so it’s safe to say I’m loving my time with Monster Hunter X. I haven’t even fought any variant monsters, X‘s version of subspecies, and I’m still only HR4, so look for further impressions when I’ve played significantly more!

Can You Pet the Dog?@CanYouPetTheDog·
20h