I’m sorry to say, but this isn’t an announcement about a new kitten book featuring cute anime boys (though that would be amazing). Rather, this season’s crazy otome anime Makura no Danshi will be getting its very own romance simulation game! Aside from the fact that it will be for both iOS and Android and is coming out sometime this winter, there’s not much else in the way of information, so I thought I’d take this opportunity to admire the wide variety of content this series is garnering. 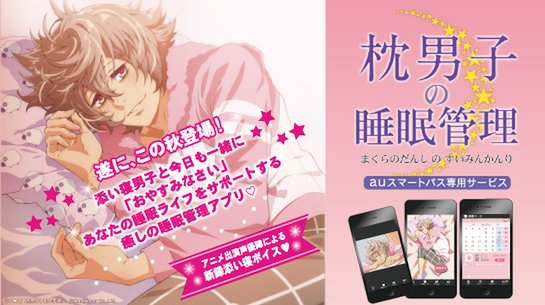 If you’ve been listening to Chic Pixel Plus, you’ll know that Sarah and I have been following Makura no Danshi this season. Given the horrendous production values that result in extended still frames, awful animation, and a strange lack of audio during numerous sequences, I’m honestly surprised they’re actually putting more money into this franchise! In addition to the recently announced mobile game, there are also a number of upcoming drama CDs, as well as a sleeping aid app exclusive to au phones in Japan (pictured above).

I guess this is an indication that Makura no Danshi is more popular than I thought… I hope this means we’ll see even more otome anime and associated media in the mainstream going forward! Also, big thanks to Gredlen for pointing out this news to me – I’m honored to have friends that make sure I stay up to date with pillow boy news.

This is some contents tourism! AoT artist’s hometown of Higa is erecting a statue in front of this dam that, in conjunction with an AR app, will recreate the iconic fateful day scene https://t.co/GvXaaQth7m

Just a reminder that our Japanese-to-English media translation courses are also available online! We've had students from all over the world join in via live webinars. If you want to study J-E media translation from home, book a free trial lesson today! https://t.co/1CnURxPub4

Easy, and i can’t stress it enough, Breezy.