When I first saw the cover of Man of Tango, I was sure it had to be bara, or gei comi, a genre of manga distinct from boys’ love (hereafter BL) due to it usually targeting a gay male audience rather than women. The author, Tetuzoh Okadaya, however, is most definitely a woman, and more importantly, she was explicitly approached by an editor to write a BL story, which resulted in The Man of Tango. I’m always excited to see BL that shakes up the genre (that’s what I’m writing my thesis on, after all!), so her unique style combined with her comments about being inspired by bara visionary Gengoroh Tagame had me very excited to see what The Man of Tango had to offer. 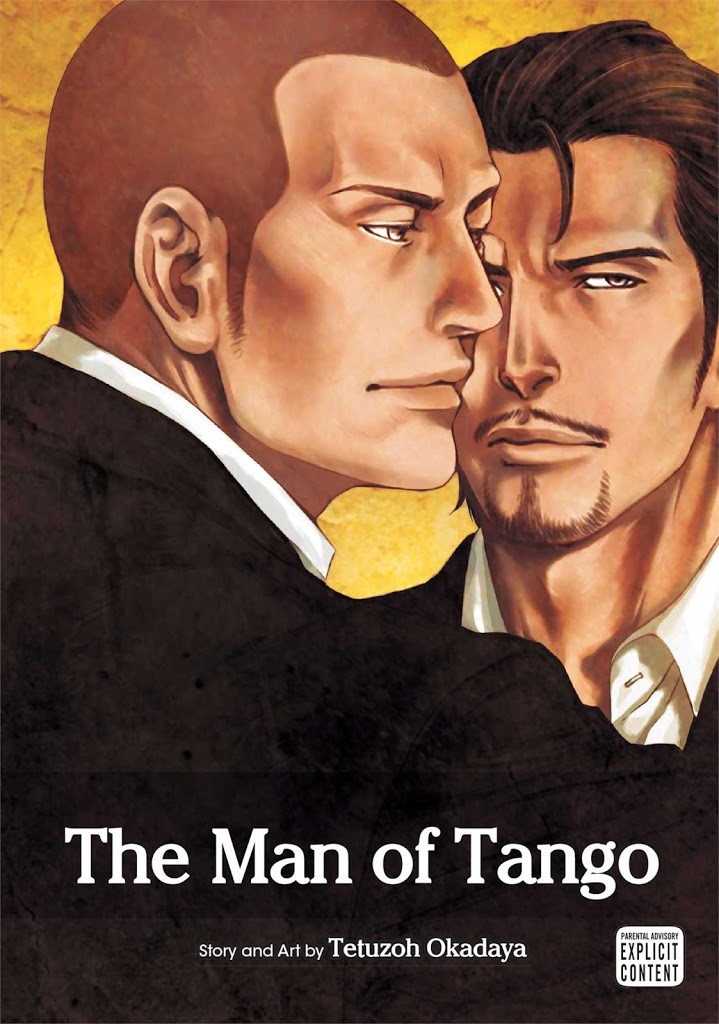 The Man of Tango is a one-shot manga about the life of tango aficionado Angie, a man that despite his deep passion for dance has never been able to awaken his true spirit, nor find a life partner. But since this is BL, all that changes when he meets Hiro, a nondescript half-Latin, half-Japanese businessman who soon finds himself drawn in by Angie’s charms. Angie reminds Hiro of his home and youth, but not all of his memories are positive. Hiro soon finds himself opening up to Angie in more ways than one, simultaneously being drawn into the mystical world of tango and gay romance. 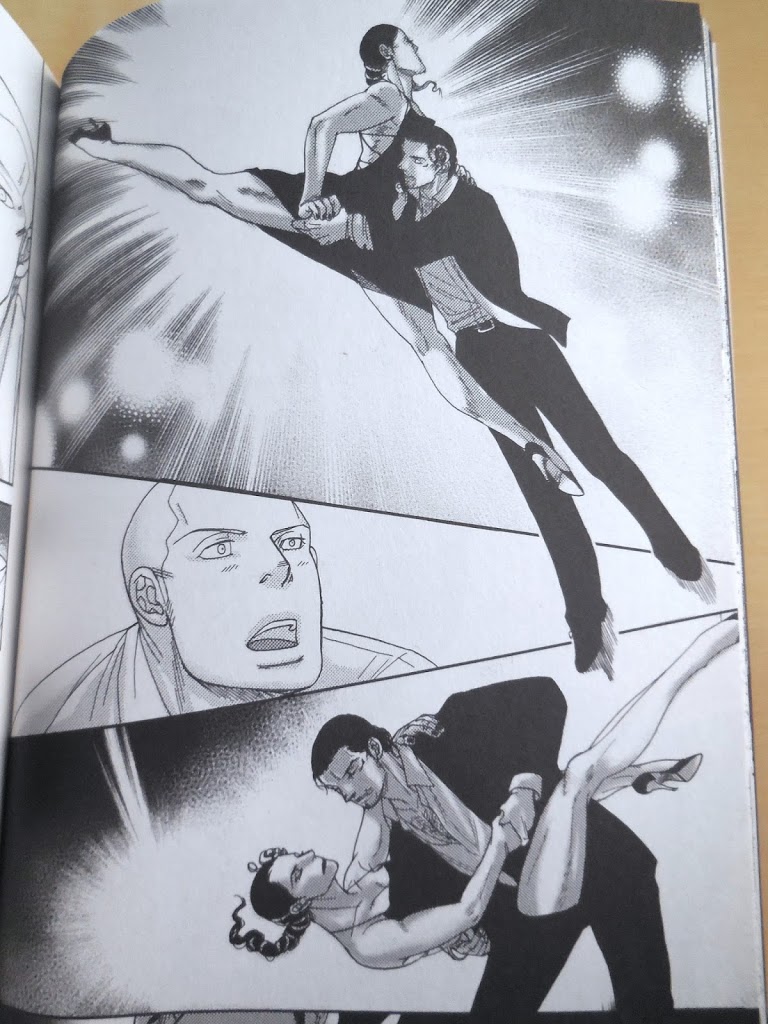 First, I have to point out that The Man of Tango does a lot of great things that you don’t see in BL very often. Aside from the love-it-or-hate-it art style, it’s one of the few BL stories I’ve read that prominently features a female character who isn’t being used as a catalyst for disaster between the male couple (usually in the form of a third love interest, jealous ex, etc.). Instead, Angie’s tango partner and roommate Bene is a warm, appealing female supporting character, which is most welcome as a breath of fresh air in the otherwise male-dominated BL genre. 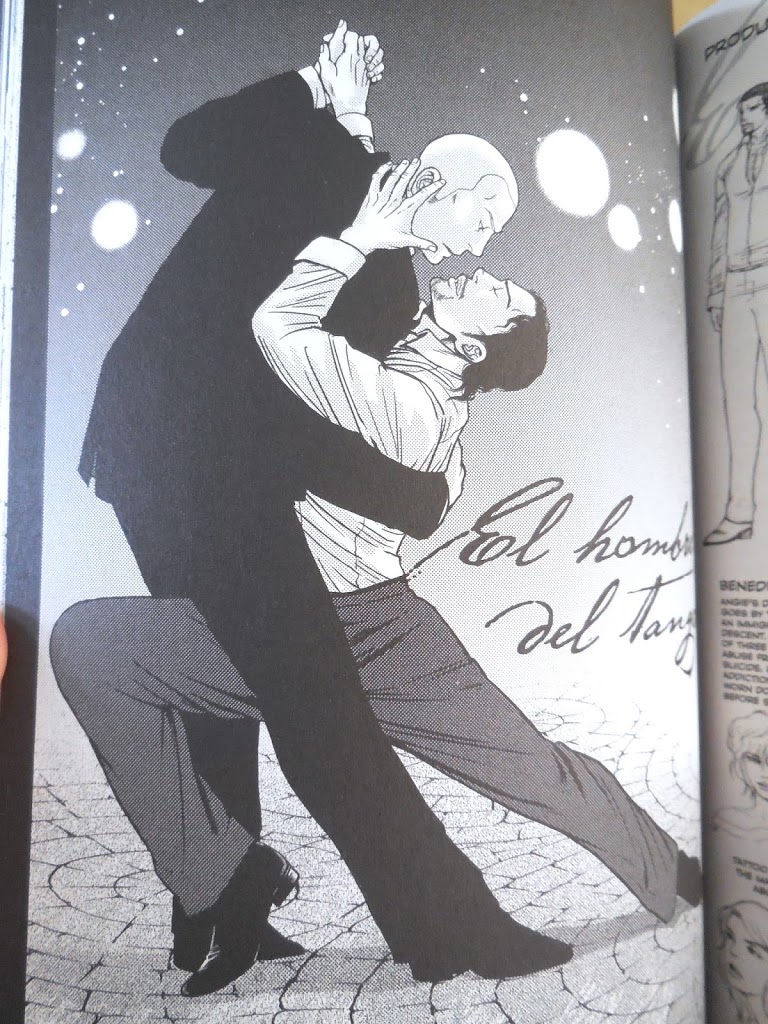 Of course, the other major draw of The Man of Tango is in the subject matter. It’s clear that Tetuzoh Okadaya appreciates the art of tango, and I felt like even I learned something about the art, or at least had a greater appreciation for it, by the end of the story. I also loved the fact that both of the male protagonists are older, with Angie being in his late thirties and even sporting some facial hair (though I suppose you could say that’s a Latin stereotype). The story is also appropriately mature, though it borders on dark, especially when delving into Hiro’s childhood, so those looking for a happy-go-lucky romance may find it too heavy. Personally, however, I really enjoyed the more mature themes. 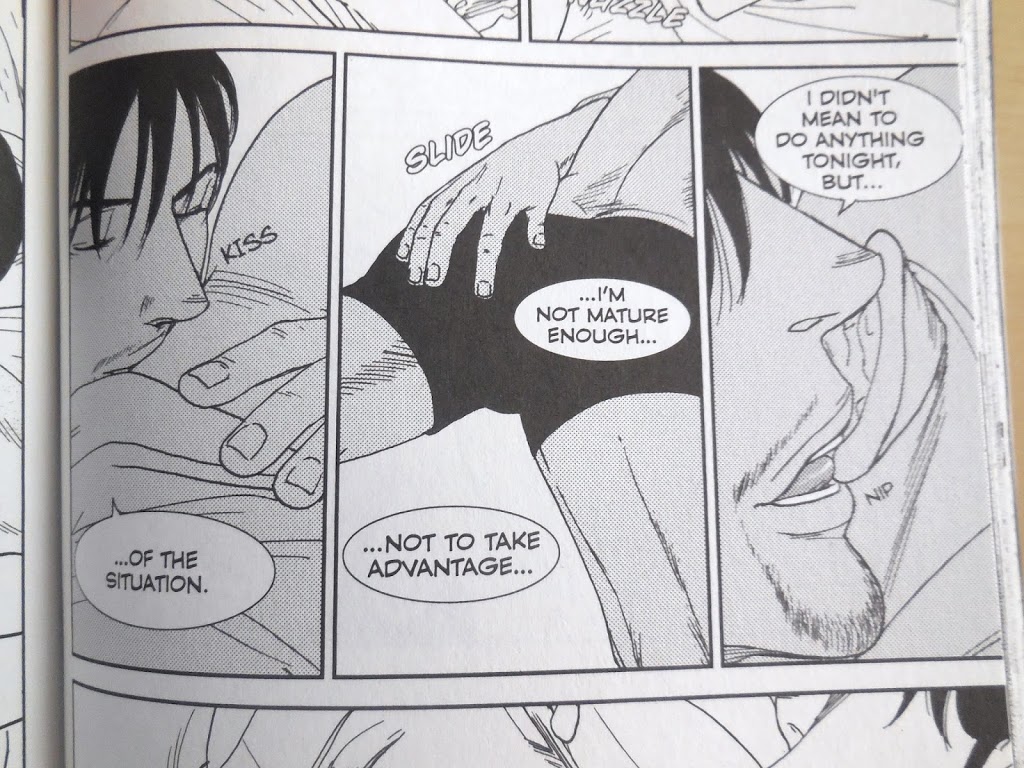 It’s the fact that The Man of Tango does so much well that makes the areas where it stumbles all the more frustrating. I am never a fan of the “but I’m not gay!” line appearing in BL, but The Man of Tango takes it to an extreme by also having Angie take advantage of Hiro when he is drunk (see above image), making Hiro’s subsequent revelation that he has feelings for Angie and has already engaged in X-rated activities with him not romantic in the least. Not only did Angie’s sexual advances on Hiro when he is inebriated make me dislike him, but Hiro’s constant “I’m not gay, but I like you!” admissions felt especially juvenile when compared to the other issues the story tackles, which made me dislike him, too. So, in the end, while I enjoyed a number of the overarching themes of the story, both male protagonists were obnoxious and the story did not convey the feeling of a great, timeless romance by having a relationship building out of a non-consentual first sexual encounter. I’m not saying that non-consentual sex has no place in a mature storyline, but in this case, it just wasn’t handled in a satisfactory manner (in fact, it wasn’t even regarded as non-consentual by any of the characters).

The Man of Tango may not be for everyone, but I still think it does a lot of interesting things and I hope to see more from Tetuzoh Okadaya in the future. Most importantly, let’s see more older protagonists, mature themes, female side-characters, and interesting art in BL! I just hope we can move past non-consentual sex and “only gay for you” shenanigans sooner rather than later.

Disclaimer: A copy of the manga was provided by the publisher for the purpose of this review