While there’s been a constant stream of otome games, both free and paid, coming out on smartphones in recent years, I’ve never been drawn to very many of them. My iPhone 4’s small screen does not lend itself well to long stints of reading, and one of my favorite aspects of otome games, the voice acting, is often completely absent in smartphone games. But now one game has finally caught my attention… over a year after I originally downloaded it onto my phone! 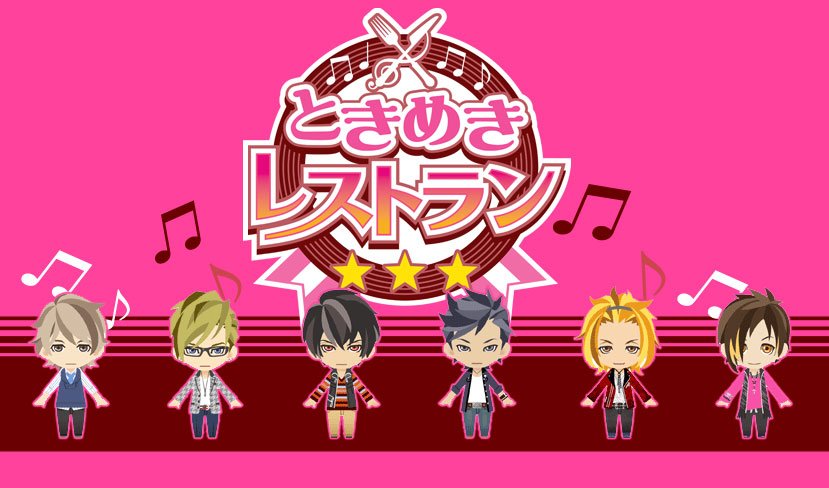 Tokimeki Restaurant certainly comes from a good pedigree, as it falls into the famous Tokimeki Memorial dating sim series by Konami, specifically the Girls’ Side line that is, as the name suggests, aimed at a female audience. But what makes Tokimeki Restaurant different from the official Girls’ Side titles that came before it is that it forgoes traditional romance simulation gameplay in favor of restaurant management to get the guy (or, in this case, guys). 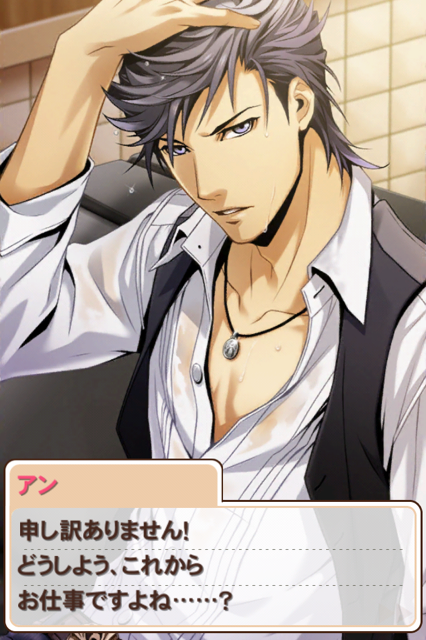 The basic premise of Tokimeki Restaurant is that you’ve landed a job at a cafe that just happens to near a famous talent agency. As such, all the gorgeous idols from the talent agency, specifically the members of two idol groups, stop by the cafe from time to time. Since you act as all but the official owner of said cafe, you can purchase new decor, change the layout, and, of course, decide what food to serve.

Since Tokimeki Restaurant is a free game with in-app purchases, a familiar stamina gauge rears it ugly head to keep those of us who don’t want to pay from playing constantly. All food costs stamina to prepare, with the more labor-intensive dishes requiring a bigger chunk of stamina. You’ll need to prepare each dish a certain number of times to level it up, which will often unlock new recipes to try.

Of course, all of this is done to lure in unsuspecting men for you to engage with. It’s a strange concept – Tokimeki Restaurant isn’t quite a Dinner Dash clone, nor is it a traditional otome game since you’re never going down any single character “path” unless you deliberately choose to play that way (and even then, it’s very difficult to only romance one guy at a time). Rather, you’re simply trying to make your restaurant the best it can be and checking out as many hot guys as frequently as you can in the process! 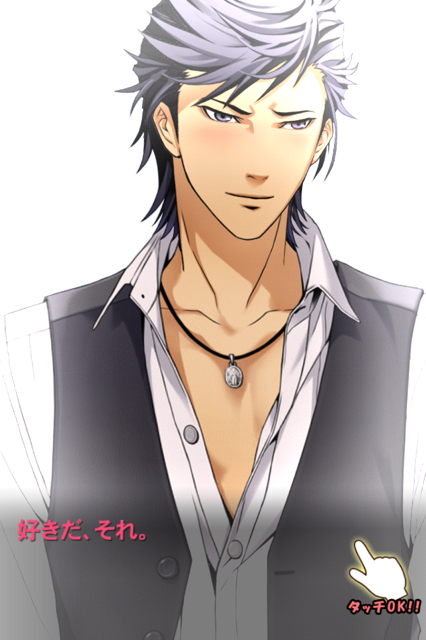 Because of this, there really isn’t much romance per say, and in its absence are quaint little scenes with one or more of the characters that unlock after certain requirements are fulfilled. For example, right now I’m trying to raise my restaurant’s proficiency in meat dishes because my one true love Kento has a real “steak tooth,” as it were. After five scenes with a character have been unlocked, there will be the opportunity for a thoroughly embarrassing “skinship” scene, which is basically a minigame where you can poke and prod the men to elicit a range of amusing responses. This harkens back to the original Tokimeki Memorial Girls’ Side games, but it’s really the only thing in the game that is reminiscent of the original series.

Needless to say, I’ve found myself completely enamoured with this game, but I think it’s more for the food than the men! Everything is strangely cute and appetizing at the same time, and since it is free, it’s a great guilty pleasure for those few spare moments when I’m caught with nothing else to do (or, more frequently, when I’m multitasking). As it turns out, there were even a couple of pages on the game in the latest issue of B’s Log – a clear indication that even over a year later, the game still has many, many fans. The constant new events and merchandise can’t hurt, either… 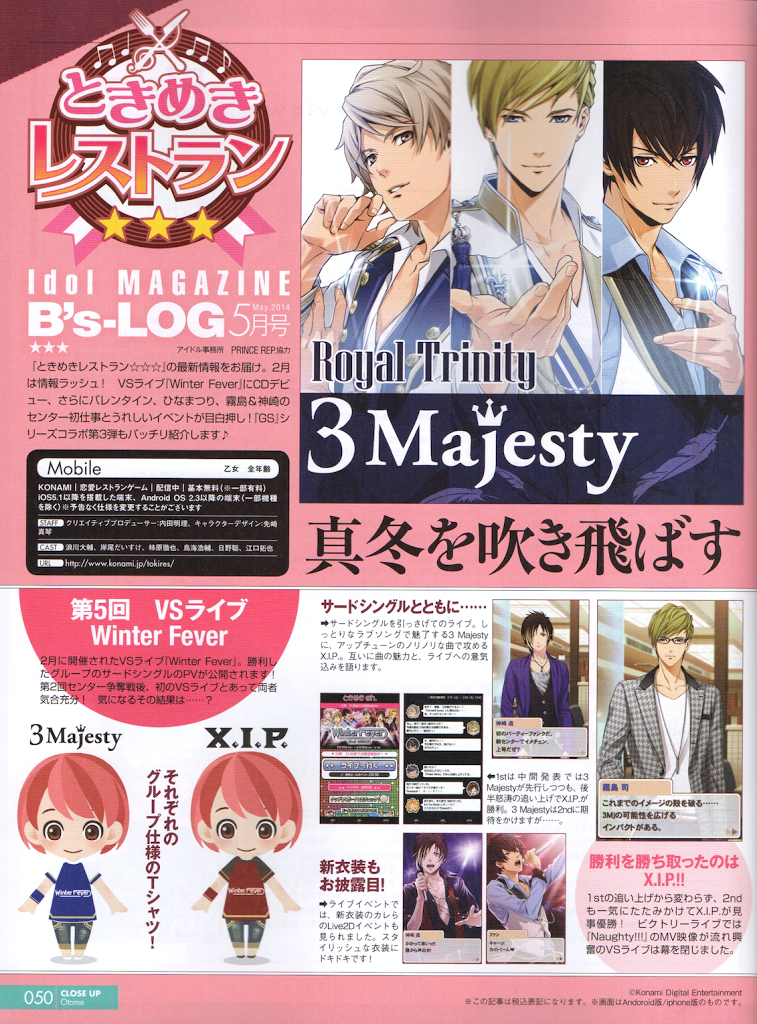 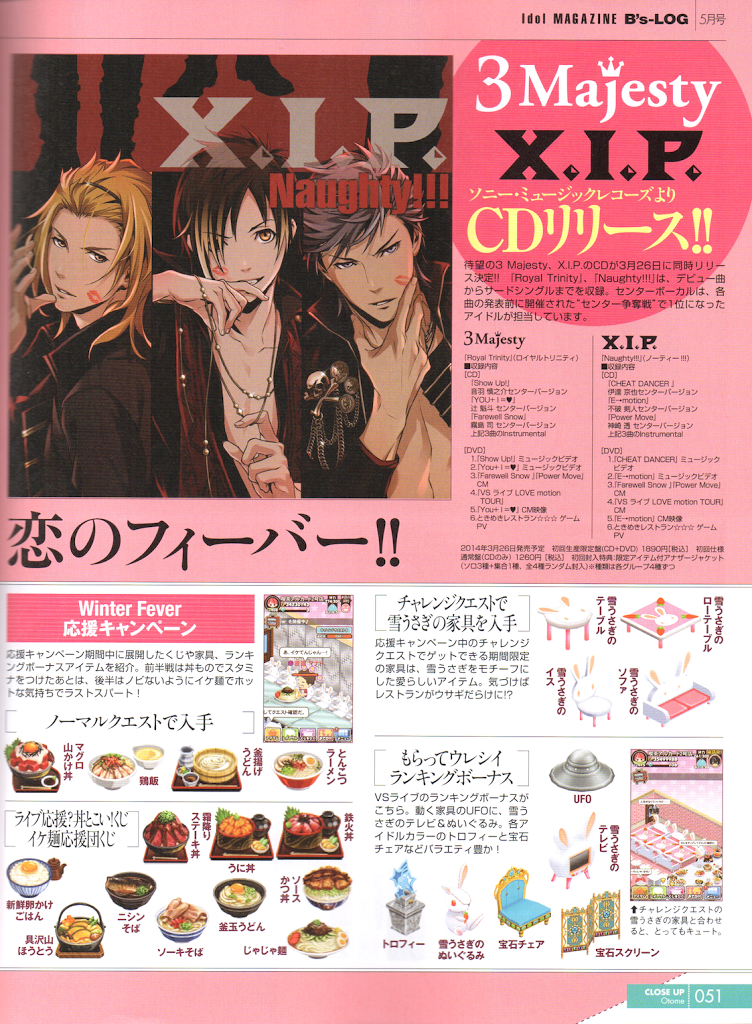 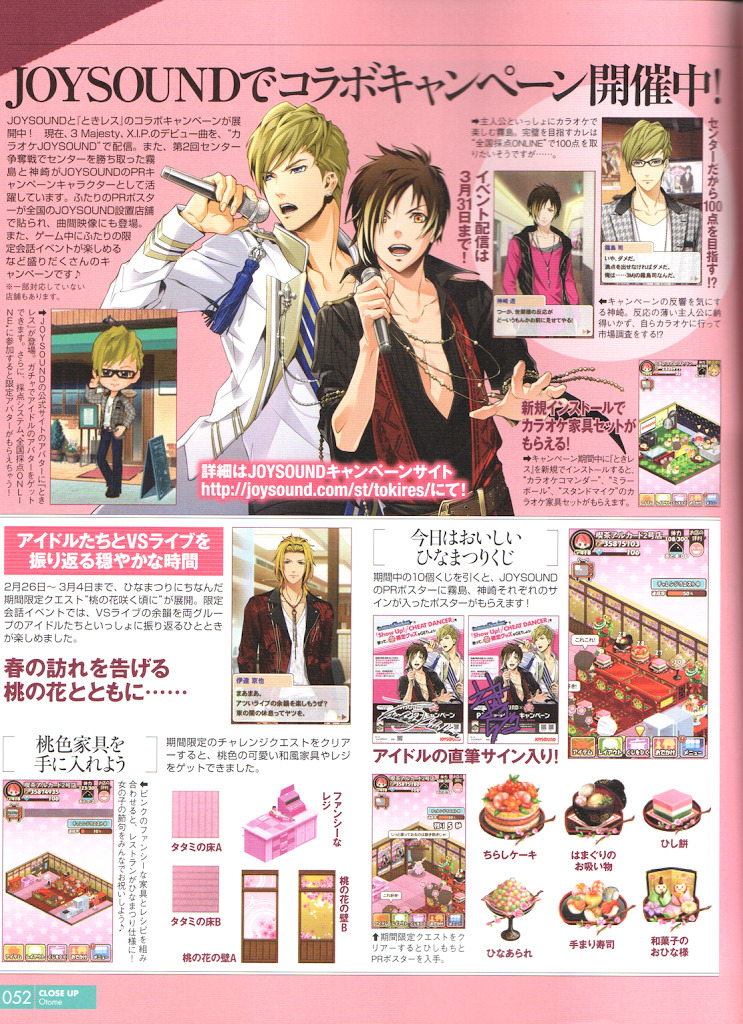 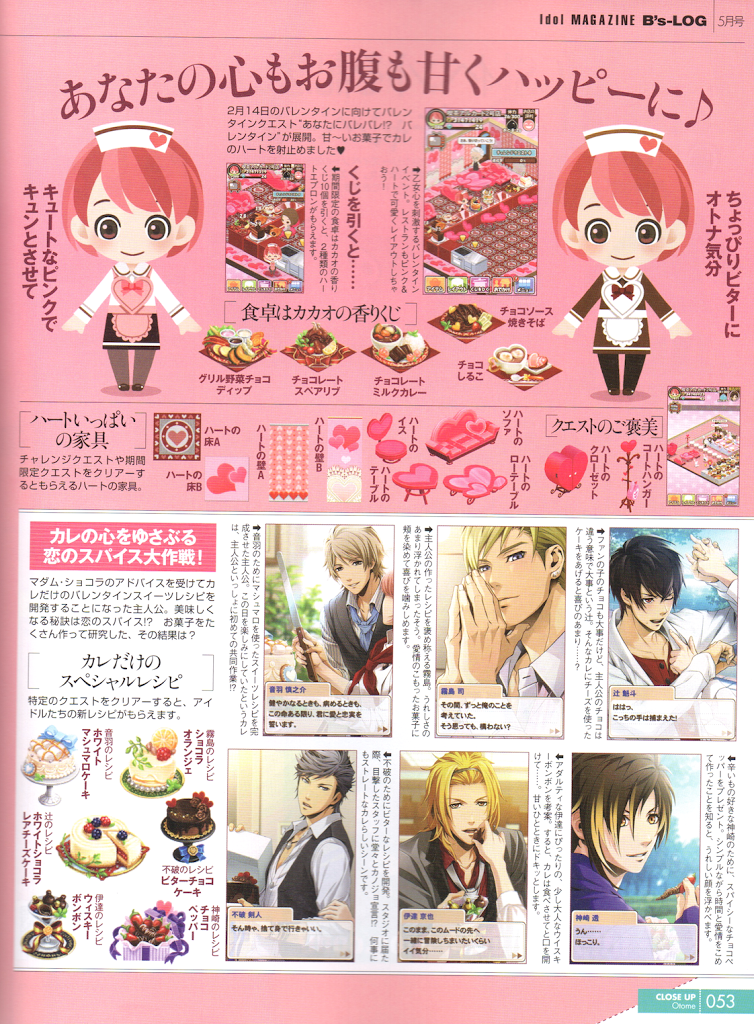 As you can see, there are all sorts of different events, which usually are accomplished by cooking x amount of a certain food. Since I’m all about the deliciously-rendered food items, here are a couple close-ups:

I’m not sure how long I’ll actually stay with Tokimeki Restaurant due to its highly repetitive nature, but it certainly is adorable and could easily be something I pick up on occasion just to see what new events are going on. Though the game is only available in Japanese, it’s easy to make a Japanese iTunes account or download the APK to play the game on Android devices, so don’t let that stop you!

If you do intend to check the game out but aren’t confident in your Japanese, I highly recommend using these two guides over at Natto Pudding!