Falcom Month is in full swing now with people all over the web playing Falcom games and writing about them! In hopes of keeping this post a little more concise than the last one, I’m just going to link to last week’s roundup and the initial Falcom Community Game-Along post, so do go check out those if you want to read up on the event!

First, @BadoorSNK linked to a great guide to the Ys series that briefly describes each of the games and recommends which ones to play first. Unfortunately, the original link appears to be dead, but here’s the image: 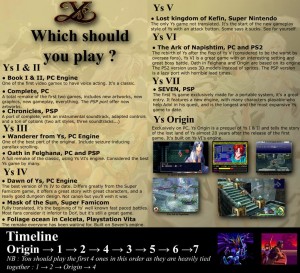 Just like last week, some folks took the opportunity to celebrate OSThursday with groovy Falcom tunes, but week two is decidedly Ys-centric! @TepidSnake goes for classic PC-88 Ys, while @pablo_0151 chooses a bright theme from Ys III, and @Soulhouf highlights a more intense number from Ys: Oath in Felghana.

“Attack food” in #TrailsSC seems really op so far. Deal 3k damage to a boss without any charge time? Sure, why not. #Falcomonth
— Hasemo (@Hasemo) January 12, 2014

@jdklove has also been streaming a playthrough of Brandish 2 throughout the week, so be sure to follow him and keep an eye on his Livestream channel if you’re interested.

Finally, @BadoorSNK wrote a great piece on his blog about the quirky PSP title Gurumin, which he just completed as part of Falcom Month. He describes it as a “pleasantly breezy, super-charming, and whole-out joyful experience” that takes about 10 hours to complete. The game is available on PSN for the Vita as well as UMD, making it another easy title to pick up this month! I know it’s next on my list to play after I finish Memories of Celceta.

Continuing on with #Falcomonth, still on Sora no Kiseki FC. Determined to finish everything at Ruan tonight!
— Peter Grant (@ragathy) January 9, 2014

Hopefully we’ll see more writeups and impressions as people start to finish their games in week 3! Expect something from me, at the very least… I’ll see you in the next roundup, and until then, happy gaming!