I’m not usually one to preorder games. Limited editions, exclusive preorder costumes… none of that interests me, for the most part. Usually, the only reason I’ll preorder a game is if it’s a title I’ve been looking forward to for a long time and the publisher is offering an exclusive preorder bonus such as a soundtrack or artbook for no additional cost, or if I’m certain it’s going to have a small-print run, as is the case with many Atlus titles.

Well, don’t know what it is about 2013, but all of my most-anticipated titles have been getting great preorder bonuses that I just haven’t been able to pass up. Not only that, but I’ve started to branch out into preordering manga and (dare I say it) figurines, as well, making this the year I’ve preordered the most things to date… and it’s only May! 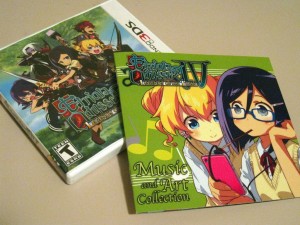 The first preorder I punked down my hard-earned cash for was a copy of Etrian Odyssey IV: Legends of the Titans. As the latest entry in the notoriously difficult dungeon crawling series, I was on board from day one, even though I’d never played an Etrian Odyssey game before. When Atlus announced they’d be providing a bonus music CD and design book with all first edition versions of the game, I quickly caved and put myself down for a copy.

Then Aksys Games had to go and announce another otome game, Sweet Fuse: At Your Side. Since Hakuoki: Demon of the Fleeting Blossom is the only game in recent memory that I’ve actually upgraded to a limited edition for (what can I say, I love my otome games), I was ready to put money on Sweet Fuse the day it went up for preorder on Amazon, no questions about bonuses asked. Hopefully Aksys will announce some kind of extra for those who’ve preordered, but I’m happy to show my support for more localized otome games through this preorder. 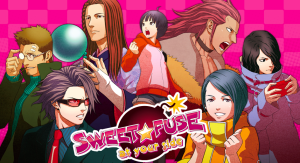 Next, I preordered something that wasn’t a game, but still very near and dear to my heart. The item in question is actually a manga by the name of Utsubora, by one of my very favorite manga authors, Asumiko Nakamura. Now, I wouldn’t have preordered this just for the sake of supporting the release of one of her titles in English, especially since I get pretty much all of my manga in Japanese now. Unfortunately, however, the publisher Vertical tweeted that Utsubora was not getting many preorders at all and would subsequently be having a very small print run. Not only that, but they later mentioned that Amazon cut its order in half to account for the lack of preorders! How could I not show my support (and possibly get a very rare manga in the process)? The rest, as they say, is history.

Finally, we come to my latest preorder, which also happens to be the winner of the “strangest thing I’ve preordered in 2013 thus far” award. Rather then explain further, I think I’ll let the following picture speak for itself: 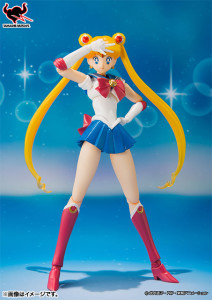 Yep, that’s a Sailor Moon figurine. I’ve never been one to collect figurines, let alone preorder them, but I’ve heard this series, S.H Figuarts, can out of stock very quickly, so I had to make sure I got one for myself. Considering Sailor Moon has had such a huge impact on my life and she was my role model throughout much of my youth, I thought it’d be very appropriate to have a mini Sailor Moon to cheer me on from my desk. Plus, all preorders get bonus faces (apparently they’re interchangable?) and a Luna figurine, as well.

Believe it or not, those four things are all I’ve preordered so far this year, and that’s still leagues beyond the one or two items I’ve preordered in past years! Not only that, but there are many other games I’d love to get, but just haven’t brought myself to preorder yet. The main ones I’m tossing up at the moment are Shin Megami Tensei IV, which comes with a bonus soundtrack and guidebook, and Kingdom Hearts 1.5 HD, which comes with a bonus artbook. Oh, my poor wallet!