Well, this Beat the Backlog project is going just swimmingly, wouldn’t you agree? Three months in and I have no completed games to show for it… but the more pressing matter is the fact that I completely jettisoned Harvest Moon: A New Beginning back in February! In the end, I think it was far too similar to Animal Crossing: New Leaf, as I just couldn’t get myself motivated to play it in addition to my daily Animal Crossing duties. How disappointing! That doesn’t mean I won’t come back to it in the future, but I think I’ll have to hold off until my Animal Crossing fever gone down.
I’m not really sure what to do about February, but I’m going to keep moving forward. I did finally start playing Katawa Shojo, a free English bishojo visual novel (i.e romantic visual novel aimed at primarily a male audience) that was released to much acclaim last year, which I’ve been meaning to get to for some time. As such, that’ll probably replace Harvest Moon: A New Beginning as my February backlog pick, and I’ll endeavor to finish it sooner rather than later. Expect some impressions of it in the near future! 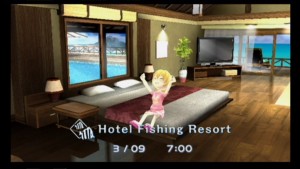 So, with that out of the way, I’ve decided to move on to… Fishing Resort! I’m not exactly why I’ve felt so compelled to start it now, but since I’ve been so indecisive as to what I want to play recently, I figured it’d be best to go with my gut. So far I’ve put approximately 3 hours into it, and I have to say it’s quite fun and relaxing without being the completely open-ended kind of relaxing that Animal Crossing tends to excel at. Oh, by the way, all images used in this post were taken from my game, and I’ve even made a neat (if I do say so myself) little video that shows what the gameplay’s like!

Here are a few of my first impressions in convient bullet-point fashion:

✄ The game is very open-ended, with a number of quests and goals to complete, but it never feels like it’s forcing you to do anything. Love kayaking out into the open sea to see what you can catch? You can do that to your heart’s content! All fish you catch can be exchanged for points at the end of the day which are then used to purchase items such as new rods and lures, so you’ll never run out of supplies to fish away without a care in the world, if that’s what you so choose.

✄ Perhaps the most irritating thing about the game, however, is the day/night cycle. Every day, without fail, the game will spirit you back to your hotel promptly at 7 pm. While this isn’t the end of the world, it gets annoying having your marathon fishing sessions interrupted.

✄ There are a number of different areas in the game that you can travel to as you unlock the option to stay at different hotels. The first area is nice, but I’m already looking forward to seeing new locations and catching different kinds of fish! The prospect of new locations is a great way to motivate players to  complete quests and progress in the game.

✄ Of course, all of the best games have customizable clothing options, and Fishing Resort definitely fulfills that line on the checklist. It’s totally superficial, but I love saving up for silly items to clothe my avatar in!

The real question is whether or not I will stick with Fishing Resort longer than I did Harvest Moon: A New Beginning. Right now I’m confident that I will, as it’s proving to be a lot of fun and I’m getting a big kick out of the motion controls. Be sure to check back in about a week’s time to see how I’m faring!