What’s this?! Why, it’s the triumphant return of Memos from Mamemura! Instead of giving some sob story explanation as to why I haven’t been updating weekly (though I will point out that I’ve done more than one Animal Crossing: New Leaf-related post in the interim), I’m just going to quietly resolve to do better in the future and move on to what you’re all here for: the pictures! 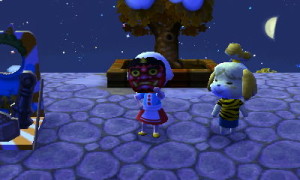 Week 11 started with a bang on the 3rd of February with a uniquely Japanese holiday, Setsubun. Setsubun marks the change of seasons from winter to spring, and it’s said that evil spirits come out during this period, much like Halloween. It’s traditional for a member of the family to dress up like a demon (oni) and for everyone else to throw beans at them to ward off evil, shouting the phrase, “Demons out, luck in!”

If you’re interested in learning more about Setsubun traditions, I urge you to check out the link above (it has some lovely photos, including different oni masks!). As for how this relates to Animal Crossing:  New Leaf, players have the opportunity to choose either a blue or red oni mask and have beans thrown at them by the townspeople. You can also buy a box of beans to throw at unsuspecting friends who come to visit! 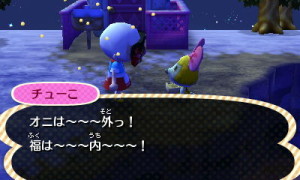 It was a lot of fun running around and capturing each villager throwing their beans at me. Chuuko had particularly cute dialogue; you can see the little yellow beans scattered about in the screenshot above. 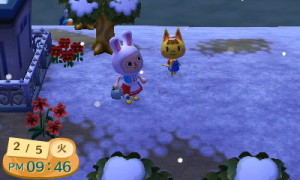 Soon after, the adorable Maiko-chan appeared in my village for the first time. What a cutie! I was able to send her on her way to another village, and to show her thanks she sent me her picture in the mail the next day. 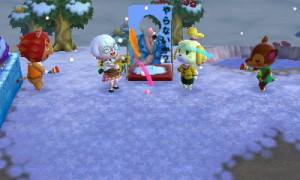 I finally got my act together and erected this lovely “Yaranai ka?” sign (pun intended)! For some reason I get a big kick out of my townspeople gathering together to celebrate such a silly thing. I have a bit of a Kuso Miso Technique theme going on, actually, as I’ve also taught Shimoyake to say “kuso miso” as his catchphrase… 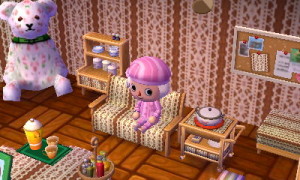 I also went on my first dream visit to a stranger’s town – the gal who’s in charge of the gorgeous room pictured above was actually featured in the post I did on my designs earlier in the month. Her work (including the lace pattern shown) is amazing! 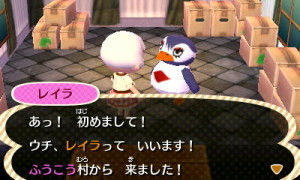 And lookie here, another new villager moved into Mamemura! Layla the penguin actually came from a friend’s town.

Even more interesting than the fact that villagers can move out of your friend’s towns and into your own is the fact that they actually remember the melody from the town they previously lived in! Here Layla put on a little performance and sang Fuukou Village’s melody for me. 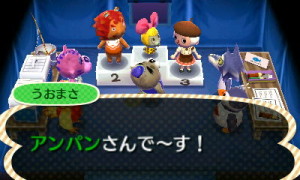 Would you believe this was my first time participating in the monthly fishing tournament? I only got 3rd place, but I’ll take what I can get! (I’m usually too busy on Saturdays to take part) 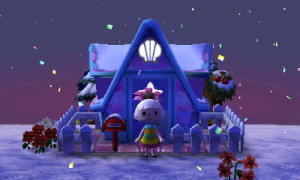 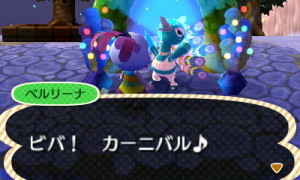 Why, it’s Carnivale (known as Festivale in North America)! What a fun and colorful holiday! The main goal of the day was to collect different colored feathers for the fabulously-clothed peacock shown above in order to get the special furniture series only available during the festival. 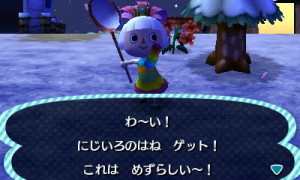 Let me tell you, collecting feathers is hard work… Pavé asked for pink, and after searching at least 30 minutes without finding a single pink feather, I finally gave up. Luckily I was still able to score a couple pieces of this furniture series along with a rare rainbow feather (shown above). 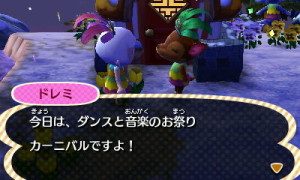 The best part of Carnivale was seeing all of the villagers dressed up in their colorful garb, dancing and singing the town tune. Lookin’ sharp, Doremi! 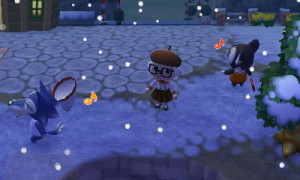 I guess Carnivale got everyone in high spirits! The above screenshot was taken a few days later – it’s the first time I’ve seen two villagers so cheerful together. 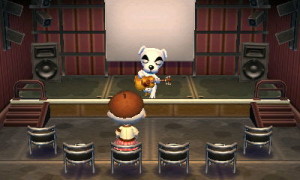 These past couple of weeks saw a lot of firsts, including the first time I managed to catch K.K Slider (Totakeke) off DJ duty. During these times, it’s possible to get a piece of music from K.K and request songs. Here’s a picture of the single I got: 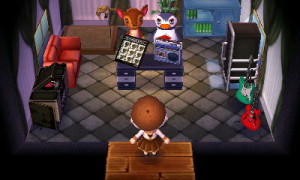 It’s always fun to see all the different ways the villagers interact with the player, as well as one another. I gotta say, it was a little unnerving to walk into Layla’s house to the sight of her and Doremi staring right at me… Perhaps I caught them at a bad time? (Oh, and check out the album directly below Doremi!) 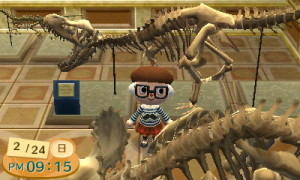 I’ve made a lot of progress on the museum! Here’s a picture of a finished T-Rex.

And as you can see, I’ve been having a lot of fun downloading my design costumes for my character to wear. In fact, the café outfit with the pink checked skirt that you see in most of the screenshots, along with the “museum curator” outfit and Team Rocket costume above are all my design items made by various creators.

Tune in next week for the first days of spring in Mamemura and a few dream world town visits!

Update: I just realized I don’t have any Valentine’s Day pictures! Unfortunately the holiday isn’t really celebrated in Animal Crossing, so all I got were some chocolates from Shizue-san and a few villagers I’m close to. Sorry about that!