Two weekends ago, I participated in the Extra Life 24-hour gaming marathon to raise money for children’s hospitals for the first time ever, and I must say it was quite the experience! First, I want to give a huge thank you to everyone who donated –– I exceeded my goal of $300 by a whole $72! That means I raised a whopping $372! That is no small feat, and I couldn’t have done it without all of your help.

I also want to give a big shout-out to all the folks who stopped by to watch as I streamed myself playing games for the full 24 hours (That’s right, I made it! That, too, is no small feat). I’m confident that I wouldn’t have been nearly so driven to stay awake the whole time if it weren’t for the viewer count hovering between 6-12 for the majority of the 24 hours, and the folks who dropped in to chat made the marathon that much more fun to do. Lastly, a couple of local friends of mine stopped by for the final 6 hour stretch, and that was a major boost to my energy! I probably said more than a few weird things as a result of too much coffee and miscellaneous energy drinks, but I hope they enjoyed themselves.

Since the theme of the marathon was to go through games in our backlogs, I made it my personal goal to beat at least one full title, as well as play a few others that I’d been meaning to check out. So, what did I think of the games I ended up playing? Were you able to guess what I tried based on the hints in the title of this post? Read on to find out! 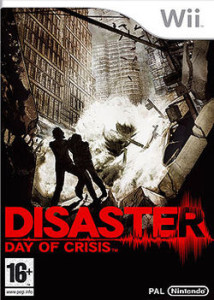 Disaster: Day of Crisis
I decided to start with one title that I’d been eying for a while but finally managed to snag for an extremely reasonable price, just in time for Extra Life! Disaster: Day of Crisis is a Japanese game by Monolith Soft (the folks behind the recent Xenoblade Chronicles) that has you controlling Raymond Bryce, who may be one of the coolest protagonists I’ve seen in a while. He’s having a pretty awful day full of everything from tsunamis (not one, but two) to volcanic eruptions, and he’s stuck both rescuing civilians and fighting terrorists. Ray sure gets around!

Going into Disaster, I really only expected it to be about rescuing people, with helping civilians being the main point of the game. Boy, was I wrong. Disaster is like the whackiest Hollywood action flick imaginable –- it has a goofy plot with nonsensical dialogue and everything from first person on-rails shooting (and since it’s on the Wii, it’s all motion-controlled) to driving sequences (again, motion-controlled) and even a one-on-one fight with a bear. Yep, a bear.

I actually managed to beat the game in about 11 hours, and it was probably my favorite experience from the 24-hour marathon. It’s not the most polished game ever, and it certainly takes a person with an appreciation for camp to enjoy it, but I stand by it being one of my favorite titles on the Wii to date. I’m even considering playing it again with the newly-unlocked New Game+! That’s a big deal for me, considering I hardly ever replay games.

Harvest Moon: Tree of Tranquility
This isn’t the first time I’ve mentioned Harvest Moon: Tree of Tranquility, and admittedly I didn’t start this one from the beginning, but it was the perfect peaceful game to take a break with after the action-packed Disaster, so I popped it in for a few hours to continue my quest to woo bachelor Owen and expand my growing barn of animals.

Last time I played Tree of Tranquility I bought my first chicken, and I was pleasantly surprised to realize that Chika (yes, Chika the chicken) laid one “good” egg a day for me. Selling good eggs was profitable enough, but with 3,000 G I could buy a mayonnaise machine to make mayonnaise out of the eggs. For the machine to cost that much, I assumed that meant selling mayonnaise would be much more profitable than just shipping off the eggs to the market by themselves… or so I thought.

Let it be known that I went into Tree of Tranquility with the intention to not look at any guides or walkthroughs, so all of my decision-making thus far has been purely “instinct.” Well, my mayonnaise machine intuition was totally wrong – after saving up for days in the game to purchase said machine, I placed an egg in, got my mayonnaise bottle, and promptly sold it… for the same price of an egg (or thereabouts). Yup, 3,000 G down the drain, moneymaking scheme unceremoniously shot down. What a disappointment! At least putting an egg into the machine and watching a mayonnaise bottle (Japanese-style, of course) pop out is relatively amusing. How on earth do you even make money in Harvest Moon? That’s a question that’ll have to wait for another day… 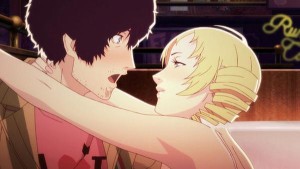 Catherine
The last title I played (aside from a few minutes spent playing Saints Row: The Third that are best forgotten) was one I have long been interested in checking out: Catherine. Catherine probably needs little introduction, considering it’s become rather infamous since its release last year, but the general premise is that the main character, Vincent, has a bit of a lady problem. He’s afraid of committing to a permanent relationship with his long-time girlfriend Katherine, and it just so happens that a mysteriously alluring girl named Catherine has her eye on him… Throughout the game, you’re required to juggle your relationships with the two girls, choosing “good” or “bad” responses to various questions and prompts, making it a little like a dating sim game (I’m told these choices influence the game’s ending), but the majority of the gameplay comes from the puzzle segments that occur at the end of chapter.

I believe I’ve done about four chapters of Catherine so far, and I have to say I quite enjoyed what I played during the marathon. I’d heard the puzzle levels were particularly brutal, so I went in on easy, and didn’t have too tough of a time, especially since I had three people telling me what to do (which was probably a good idea, considering how tired I was by that point). Many have applauded the game for tackling some difficult, more “mature” topics such as issues surrounding commitment and other grownup relationship struggles, but I have to admit that none of the characters came across as likable in the slightest, so it made it difficult for me to feel at all invested in the narrative or Vincent’s “plight.” That said, it was a strange, intriguing experience that is unlike any other game I’ve played, and I look forward to seeing it to its conclusion. 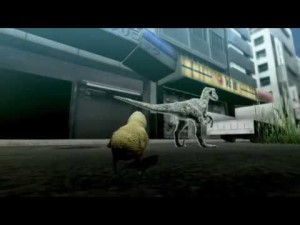 [Update]
Tokyo Jungle
How could I forget that I played Tokyo Jungle during some of my downtime, as well?! Clearly I was more tired than I thought… Well my pal Christine reminded me that I did indeed play Tokyo Jungle. In fact, we played together! It was her first time playing so I tried to do my best to show her the ropes. We both played carnivores and got pretty far, actually, but you eventually always hit that wall where things just get stupidly tough. I believe we met our demise to a group of ravenous lions.

This wasn’t my first time play Tokyo Jungle, to be sure, but it’s such a great game that’s easy to pick up for short bursts of play that I had to include it in my marathon. I still have a few more animals to unlock, so I imagine I’ll keep chipping away at it well into next year. I don’t want to jump the gun, but Tokyo Jungle is definitely in the running for my game of the year! It’s definitely going to make the top 5.

Well, believe it or not, that’s all I played during the 24 hours! I’d say it ended up breaking down to about 11 hours of Disaster: Day of Crisis, 2 hours of Harvest Moon: Tree of Tranquility, 6 hours of Catherine, 2 hours of Tokyo Jungle and 1 hour of Saints Row: The Third. That doesn’t quite add up to 24, but counting breaks you’ve got a full day’s worth of gaming! Would I do it again? Absolutely! … In a year from now.