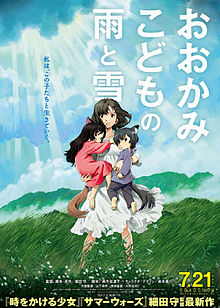 A few weeks ago I was treated to a big-screen showing of Wolf Children (おおかみこども雨と雪), the latest film by Mamoru Hosoda, director of Summer Wars and The Girl Who Leapt Through Time, at a local cinema. I must say, I’m very glad I went! The screening was part of an anime festival here in Australia, and as such was only available for a limited time, so I actually made the executive decision to see this over Studio Ghibli’s From Up on Poppy Hill.

Wolf Children tells the story of Hana, a 19-year-old woman who falls in love with a mysterious man who, after a whirlwind romance, reveals himself to be the last descendant of Japanese wolves. She accepts him for what he is, and the two begin to cultivate a life together, starting with the birth of two children, a girl named Yuki and younger brother Ame. Both children have a mixture of human and wolf qualities, and have the ability to change from being 100% human to 100% wolf (or any mixture of the two) at will, but their emotions often get the better of them, causing them to change into wolves at inappropriate times, making things tough for young mother Hana. When the father dies unexpectedly, Hana is forced to raise the children alone, without any help from the outside world, and she makes the decision to move to the countryside so Yuki and Ame can grow up without the constant prying eyes of outsiders. 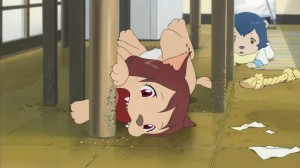 First and foremost, Wolf Children is a beautiful film, both in animation and its seamless integration of the fantastic with the real. Some reviewers have compared the film to the works of Studio Ghibli, and I have to say I agree, as they both feature an exquisite attention to detail. Though the story is never quite as grabbing, nor the music quite as memorable, as some of the more iconic Studio Ghibli films, fans of My Neighbor Totoro will find a lot to like in Wolf Children.

It’s hard to talk about the plot of the film without revealing the finer points of the narrative that best be left for the viewer to experience themselves, but I must say that though the overall story ran a relatively predictable course, the narrative, which chronicled the hardships and joys Hana faced raising her two wolf children, was at its best when depicting the “mundane” aspects of life. One of my favorite scenes is when Hana brings her two children out to their garden to harvest potatoes, something that I did with my own parents when I was young. Of course, all of these “normal” activities include a fantastical element, that of the wolf children, but the way they are portrayed is surprisingly believable. 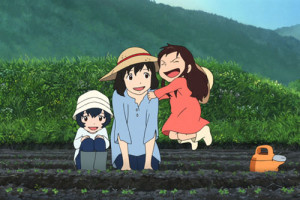 The Wolf Children‘s ending ultimately left me unsatisfied, but I enjoyed the rest of the film enough that it didn’t end up leaving a sour taste in my mouth as I left the theater. The film excels in depicting everyday moments that are punctuated with the fantastic, and offers more than a handful of memorable scenes and thought-provoking themes to keep you engaged in the film even after the credits have rolled.

… Of course, this wouldn’t be a Chic Pixel post without at least one reference to merchandise! How about Ame and Yuki-inspired brainwave-controlled ears?

Or how about Ame and Yuki tail keychains? Isn’t that a little morbid? 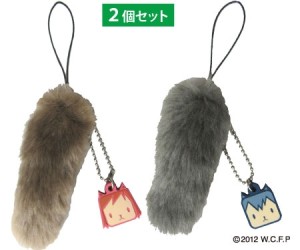 Well, regardless of the weird merchandise, I highly recommend watching Wolf Children if you get a chance. Wikipedia has it listed for a October 17th release date in the US, but I haven’t found any other information about showtimes or what cities it’ll be in. If it comes to your area, I definitely suggest seeing it on the big screen!