After spending a week writing about vampire manga for the vampire Manga Movable Feast, I think it’s high time I went back to video games! In honor of Halloween I thought it’d be appropriate to post some long overdue impressions of an overlooked 3DS title, Gabrielle’s Ghostly Groove 3D. 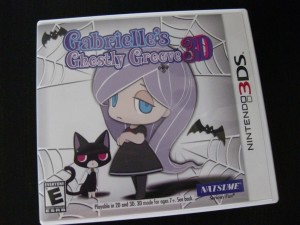 I’ll readily admit that the only reason I bought Gabrielle’s Ghostly Groove 3D was because of its downright adorable art style. I love the Halloween-y theme, and everything about the game just screams “cute Japanese things that Anne loves,” so it basically had my name written all over it. That said, I did go into it knowing that Gabrielle’s Ghostly Groove: Monster Mix did not receive extremely favorable reviews, so I was prepared to have the aesthetics be the only positive aspect of the game. 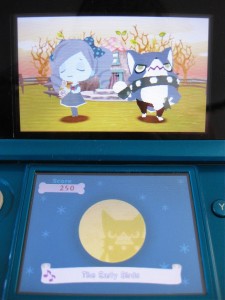 Unfortunately, my expectations weren’t very far from the reality. Gabrielle’s Ghostly Groove 3D features gameplay similar to Elite Beat Agents and Theatrhythm, but it is clearly intended for a younger audience, as it’s not only extremely easy, but not very varied. Suffice it to say, this won’t be a rhythm game enthusiasts will be clamoring to play. On top of that, the developers apparently couldn’t afford to put licensed tracks in the game, so all of the songs are sad renditions of classical tunes or made-up tracks specifically for the game. Since rhythm games are essentially all about the music, the lack of good songs is really detrimental to the whole experience.

But while Gabrielle’s Ghostly Groove 3D pretty much fails in the gameplay department, it has some compelling aspects that I can’t ignore. For one, the game actually has a story: Gabrielle unwittingly sneezes out her spirit one day, causing her to have an “out of body” experience while her actual body is in what appears to be a coma in the real world. She then sets out with her talking cat to find a way to return to her body, and runs into all manner of traditional monster characters, such as Vlad the vampire and a friendly yet dim-witted Frankie. Though the story is basically fluff, the characters and their interactions are quite fun to watch.

There’s also a significant wardrobe and makeup customization system for Gabrielle. Getting good grades on songs will unlock new items, and since you can watch Gabrielle dance different routines to each song as you play them (as I said, it’s very easy, so it’s not hard to watch the top screen and tap along on the bottom) and it will show the costume changes you’ve made, making it a lot of fun to play with different coordinates and hairstyles. In a game this cute, that’s definitely a bonus!

All in all, Gabrielle’s Ghostly Groove 3D won’t win any awards for outstanding gameplay, but if you’re at all like me, you’ll be willing to look past some forgetful rhythm sequences and see it for the adorable experience it is. It would also be a good pick for people who have difficulty with rhythm games, or are looking for a light entry into the genre. 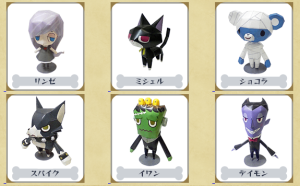