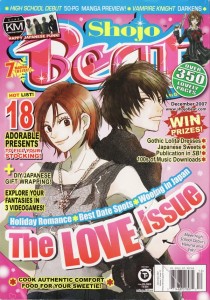 Ah, Shojo Beat. It may have started just as I was transitioning out of reading manga in English, and it may not have romanized the word “shōjo” properly, but it still holds a special place in my heart. I still remember when the first issues of the new manga magazine began to arrive at my high school’s library… I would devour each and every issue, though I barely followed the manga being serialized. There was just something so comforting knowing that there was a publication that felt like it was made just for me –– shōjo manga has always been my favorite type of manga, and the Japanese culture articles gave me a glimpse of the world I yearned to return to ever since I went abroad during my freshman year. 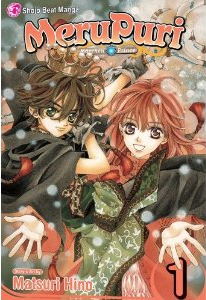 In honor of this week’s Manga Movable Feast, I thought I’d take the opportunity to talk about one of my favorite overlooked Shojo Beat titles, MeruPuri. MeruPuri (short for “Märchen Prince”) ran for four volumes under the Shojo Beat imprint, though it was never serialized in the monthly magazine. Of course, MeruPuri‘s author, Matsuri Hino, has another, more popular series that was published monthly: Vampire Knight. Her work strikes me as being very similar to Arina Tanemura‘s, as they both do wonderfully detailed illustrations with plenty of traditional shōjo motifs such as flowers and sparkles, but the major difference between the two is that Hino’s work often delves into slightly more mature themes, which I can certainly appreciate.

As much as I like Hino’s art, the description on the back of the first volume of MeruPuri did not sound all that appealing initially:

All high-school freshman Airi Hoshina ever wanted was to someday live in a cozy home with a loving husband, and find joy in the little things in life. As a result, she makes it her daily mission to get to school on time because school legend has it that the longer one’s non-tardy streak is, the better boyfriend one will find. But just when her daily routine is working like clockwork, an occurrence of fairytale proportions threatens to disrupt her grand plan.

On the way to school one morning, Airi drops her mirror—one that had been passed down to her through generations—and suddenly finds herself in a bizarre situation. Never in her wildest dreams did she expect to meet Aram, a little boy from a magical kingdom, to have emerged from the mirror in the short time it took her to track it down!

Now, little 7-year-old prince Aram has a problem: He’s been hit by a spell cast by his half-brother Jeile that was supposed to turn him into an ugly old man, but instead changes him into a 17-year-old man whenever he is in the dark. The spell can only be broken by the kiss of his beloved (surprise surprise), and since Airi is the first woman he lays eyes on after being cursed, he hastily proclaims his love for her.

I’m sure some people will immediately have a number of alarm bells ringing after reading the above description. Not only is Airi’s biggest goal in life to live in a “cozy home with a loving husband,” but early on in the story she gets a love confession from a 7-year-old boy. I wish I could say Hino does something spectacular to subvert reader’s expectations, but in all honestly, MeruPuri is simply very appealing fluff. I never really found Airi’s character all that likable, but Aram actually undergoes significant growth over the course of the four volumes –– he starts as a bratty little kid, but he eventually learns that he has responsibilities that he must meet as prince.

Of course, Airi and Aram end up falling in love (very early on, I might add), so much of my personal interest in the series lies in how Hino maneuvers a very strange relationship… It’s not often you see a story where a 15-year-old girl and a 7-year-old boy fall in love, after all. In fact, it may be worth picking up for that alone. Hino does a great job of getting the reader to grow attached to the characters, and, if you’re like me, you may start to have some conflicting feelings about Aram…

I’ll happily admit that part of MeruPuri‘s charm lies in the fact that it is only four volumes long, as well. It’s the perfect length to develop interesting characters in, but not so long that the story starts to feel like its dragging on, which is particularly important given MeruPuri‘s subject matter. The relationship between Airi and Aram may be a little bit too weird for some readers, but anyone interested in a romance that’s a little off the beaten path need look no further than MeruPuri. It’s exactly how I like my shōjo: beautifully drawn, emotional, and just a little bit nuts.