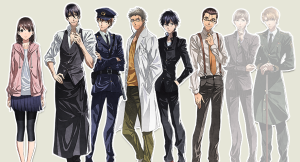 Seifuku no Ojisama. Older men in uniform. This upcoming Android otome game puts more mature men then we normally see in games such as these as objects of our protagonist’s affections. Poor Sachi, a third year university student, has the hots for men more than twice her age, and, like in any good otome game, it’s the player’s job to make sure she finds true love (as long as it comes in uniform!).
I have to say, I am beyond intrigued by this premise. I’ve long thought older men were turning into somewhat of a trend in female-oriented media in Japan, and this confirms my suspicions. Funnily enough, the boys love manga titles I’m familiar with that feature older men all focus on café staff and the like, so perhaps the two go hand-in-hand?
For the curious, the oldest male suitor revealed so far is 60 years old (and a professor, at that!). Gameplay is traditional otome game format: players read through text and make an occasional selection to dictate the path of the narrative. Seifuku no Ojisama adds an interesting twist, however, in the form of two types of endings, called “receiver” and “pursuer.” Depending on which options you choose, you may get an ending where Sachi makes the first move, or has the moves put on her by her love interest (completely non-sexual moves, I’m sure, since this isn’t a PC game). If you don’t pick the right response, you might even be stuck with the “friend” ending.
Though friend endings are common for “bad” endings in otome games, where the player hasn’t met the right conditions to have a “good,” romantic ending with one of the characters, this “receiver” and “pursuer” element is something I’ve never seen before. Even more interesting is the fact that it’s literally called the seme and uke system in Japanese. Seme and uke are pretty much exclusively used in reference to the male characters in boys love manga (referring to “top,” and “bottom,” respectively), so this may be a conscious nod to the BL fans who are eagerly eating up any and all stories about older men these days. But if that’s the case, why not make it an all-out boys love game, instead? Perhaps they are trying to reel in a larger audience while still appealing to BL fans, or that BL games don’t fare as well on smartphone markets. The alternative is that I am, of course, reading too much into all this. Just some food for thought!
So, otome fans and non-fans, is the idea of a game that features older men (or women, if bishōjo titles are more your thing) something you’d like to see more of? I have a feeling most would write it off as unappealing or worse, and though I readily admit it isn’t for everyone, I personally think it’s all in good fun and would be eager to give this game a go myself. If you’re interested, do head over to the character page and let me know your favorite! (Before anyone asks, the younger guy in a school uniform is the protagonist’s cousin. It says he has a secret… I sincerely hope it isn’t that he turns into a 50-year-old man at night!)