Here’s another thing about Japan that will stump me for all eternity: American pizza chains are actually cooler over there than they are in their home country! Sure, some may argue that squid ink pizza doesn’t sound all that appetizing, but this time I’m not talking about the pizza itself, but rather all the awesome freebie tie-in merchandise American chains like Pizza Hut and Domino’s get in the land of the rising sun.

First of all, here’s what spurred me to write this post in the first place: Pizza Hut is currently having a campaign until October 21st where if you buy a kid’s crispy pizza, you get a Rilakkuma bowl for free:

For the curious, the pizza contains the following ingredients: sausage, sliced potato, corn, parsley, mayonnaise, and tomato sauce. As it’s a kid’s size, it’s only 15 cm big, but is priced pretty reasonably at 500 yen (about $6.40). More importantly (why would anyone order Pizza Hut for the food?), here’s the bowl that comes free with every purchase:

Unlike a lot of these campaigns, obtaining the bowl isn’t a matter of buying x amount of kid’s pizzas to collect stamps or points, but you’ll actually get a bowl with your very first order. If you’re a sucker like me who’d want to have both bowls, it’d still only set you back about $13 –– a pretty good deal for two little pizzas and two adorable bowls, if you ask me!

Though it pains me that I can’t partake in this awesome campaign, I think this is a fine occasion to share my own pizza delivery tie-in merchandise experience. And what better franchise to feature a tie-in than with Pokémon?! 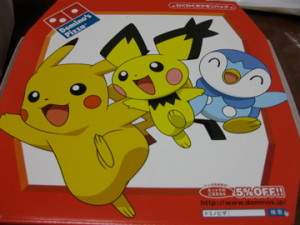 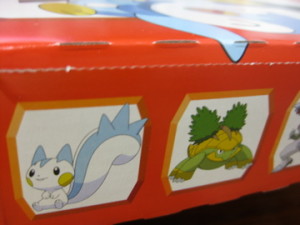 This Pokémon x Domino’s Pizza campaign was going on back when I was in Japan in 2009, and my host mother was sweet enough to order me one! And it came with not one, but two awesome freebies:

Oh, I have no doubt moving back to Japan would make me go broke… from buying so many pizzas for their adorable freebies!