As a follow up to my previous post, I thought I’d take the opportunity to look at the game’s box art more in-depth, considering that’s probably one of the most interesting aspects of the game. Not all games have completely different covers in all three regions (Japan, North America, and Europe), but Pop’n Music (aka Pop’n Rhythm in Europe) does! Though they have similarities, I think the marked differences really give each cover a very different feel.

First, we have the original Japanese cover: 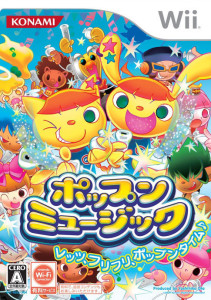 I’ve noticed an interesting trend with Japanese game covers – they tend to feature more characters than the NA/EU counterparts, making them feel more “cluttered” in comparison. I wonder why that is?

Next up is the North American cover: 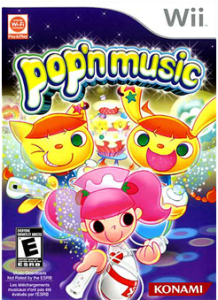 Now the NA cover is clearly using the same art of the two yellow animal characters, Mimi (the bunny) and Nyami (the cat), but aside from that, the layout differs significantly. I find it strangely telling (of something, I’m not quite sure what) that the NA cover puts much more emphasis on the humanoid female character with pink hair than the Japanese cover does. Mimi and Nyami are actually the series mascots, whereas the pink-haired girl is hardly a “main” character, from what I’m aware, so I feel her inclusion here is purely based on her character design. At least the Japanese cover also features some series regulars such as Mary, the girl with the afro in the bottom left corner.
Finally, we have the European cover:

Now this is a very different approach to the cover art than we saw in the Japanese and NA versions. The base image of Mimi and Nyami is the same, and the logo, though now Pop’n Rhythm instead of Pop’n Music, is neigh on identical to the NA version. But why the decision to go with a striped, minimalist background and additional text indicating what artists are included? Believe it or not, I generally find that Europe gets the most “minimalist” or “artsy” of cover designs when it comes to games, but I’m not sure why that is.
So, which cover is your favorite? I went into this post thinking I was going to say the European version, no question, but the more I look at the Japanese version, the more it’s growing on me. I like the variety of characters and the more colorful palette, and the logo is much more appealing. I still really dig the yellow stripes on the European cover, though! The NA one, however, is all kinds of yuck for me. I just don’t understand why they felt the need to go with the disco feel or add that cake in between Mimi and Nyami.
While you’re thinking about which is your favorite, do consider for a moment why the different covers might vary so significantly between regions! I personally really enjoy hypothesizing what the differences say about the perceived tastes of the different markets Konami is trying to appeal to.
If you’re looking for more box art analysis, be sure to check out The Gay Gamer blog! Bryan’s ‘Which Box Art is Better?’ series looks at a wide range of titles, including new releases.

Remember the visual novel writers at Voltage who went on strike, asking for better pay and working conditions? Their strike lasted 21 days, and in a surprising move: the workers WON.

A story reported with @LaurenKGurley. https://t.co/BKZtJikTIn