As our plane gently glided onto the runway of the international airport in an uncharacteristically rainy Brisbane earlier this week, a package was simultaneously delivered to our doorstep. 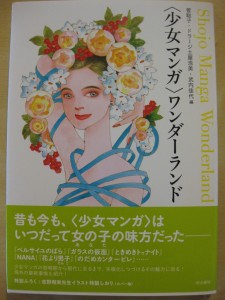 Okay, I’m embellishing a little, but the gist of things is I’m back and blogging (Hello! I’ve missed you all!) and I’m extremely excited to share pictures of my contributer’s copy of Shojo Manga Wonderland!

When I said in my original post on the book that my portion in it is small, I meant it. The book stacks up to be a total of 174 pages of shojo writing goodness, but my words only appear on a tiny portion of five of them. Regardless, it’s an amazing feeling to see yourself in print. And with a picture, no less! 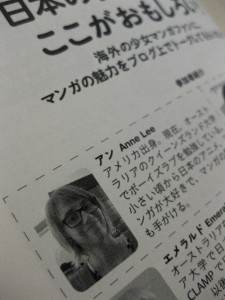 Not that we really need to know what it says, but for the interested, I’ll give a brief description: It’s a bio stating that I’m from America, studying boys’ love in Australia, have watched anime/read manga from a very young age, and dabble in translation. Since my dad asked me over Skype when I told him I was going to be in a book whether this was proof that I can really speak Japanese, here you go! I wrote it myself!
The following pages feature four questions regarding shojo manga along with my and the other nine female participant’s answers. Question #4 only got five responses printed, and mine’s one of them, so I guess that makes me pretty cool. 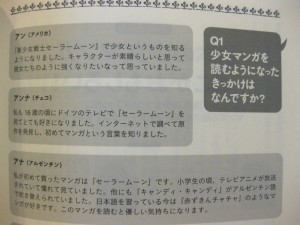 Again, I won’t go through and translate everything, but this question is asking what got us started reading manga. For me, I started watching the Sailor Moon anime at a young age, and was subsequently introduced to the manga, which then brought me into the larger world of shojo. And the rest’s history! (aside: Mine’s the bubble at the top)
Now, not only is there this interesting discussion I took part in, but Shojo Manga Wonderland is also chock full of great interviews, overviews (including a history of shojo manga), and introductions to notable shojo manga titles. And wait, what’s this?! 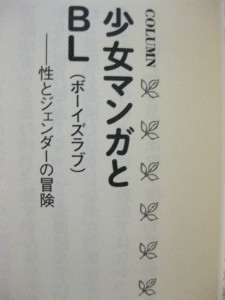 Even if you can’t read Japanese, I’m sure you can see the words “column” and “BL” (short for “boys’ love). Now this really is my kind of book! I think it’s safe to say I’ll be spending a lot of time with this puppy.