I don’t believe I’m the only one who noticed that the new art direction for the sequel to Little King’s Story, titled The King, The Demon King and the 7 Princesses: New King Story (now that’s a mouthful), differs significantly from the original. Case in point:

I would be lying if I said I didn’t like his new character design at all, as I actually quite like the illustration above, but the fact of the matter is the original had such a unique, quirky art style that has been completely thrown out the window. I assume the majority of the reasoning behind the vast change in art style stems from the fact that anime/manga style art appeals to a much wider audience. With developer Cing dissolved, Marvelous Entertainment probably has free reign to do what they wish with the intellectual property rights. As such, we get this: 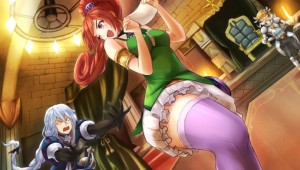 Who put thighs and ass in my Little King’s Story? Granted, shots like these are stills from event scenes and probably make up a small percentage of the game, but it’s clear that the series has a new, much more mainstream, direction. With early reports from Famitsu stating that the game will even have “love elements,” it sounds like New King Story is very much trying to catch the attention of a certain crowd.
It’s sad to see such an original-looking title changed so drastically for what I can only assume to be an attempt to garner better sales. Though I don’t mind the new art direction, it looks too much like so many other games out there already. Little King’s Story‘s King Corobo was so iconic, but the Corobo from the new title? Not so much.
Regardless, I’ll still be picking this one up when it’s released in the west (it’s already out for the PS Vita in Japan). And that’s even without having played Little King’s Story. I own it, I just haven’t gotten around to it, okay? Oh, the shame!