Before today, I hadn’t paid any attention to the upcoming Japanese 3DS title, Code of Princess, but as soon as this box art appeared, it immediately went on my radar. 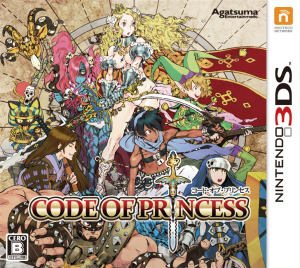 Is that not a gorgeous illustration? Generally I don’t like very busy box art, but I love the colors and attention to detail in this one. Above all, the character designs have me very intrigued – though I am decidedly not in favor of the surprised female knight with bikini armor (more on that later).
It’s always a little thrilling to learn about a game for the first time from its box art. There’s nothing more fun than browsing though a game store and coming across a title that looks interesting but you’ve never heard of, then rushing home to Google it as soon as possible. … What’s that? Yes, I am still living in 1999 and do not have internet on my phone.
Of course, finding new boxart when you’re already browsing the internet is a different thing altogether, but no less fun. I’ve learned that Kinu Nishimura, the woman behind the illustrations of 9 Hours, 8 Persons, 9 Doors and the more recent Virtue’s Last Reward, was in charge of this gorgeous cover as well as the character designs for Code of Princess. No wonder I like them!
But even with all these exciting character designs, I still manage to find something to gripe about. Brace yourself for my biggest beef with Code of Princess: 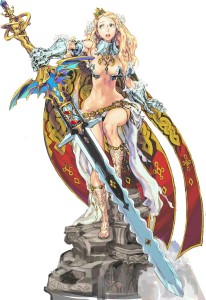 Where on earth do I start? Well, admittedly, her sword and cloak are both pretty amazing and display the kind of detail that I love, but my positive comments end there. Not only is she wearing less clothing than is physically possible, but Kinu decided her only armor would be in the form of gauntlets, which is pretty much worthless considering how little else she’s wearing. And, though the box art for the game features this lady, who is the main character Code of Princess, in a relatively active fighting stance, this official art, which has already been made into a resin figurine in Japan and is the most popular result when searching Google for Code of Princess images, is about as passive as it gets. She’s not only holding her sword in a pathetic excuse for a defensive pose, but she also has a frightened expression on her face, with her arm extended backward in a way that sexualizes her more by rendering her powerless, if that’s even possible. I hate to dwell on issues such as these, and of course I know Kinu Nishimura has done her fair share of “sexy” illustrations (999‘s Lotus, anyone?), but this image takes the cake for portraying a female main character in the worst possible light.

Well, now that I’ve gotten that off my chest… Is there anything else good I can say about this game? For those who aren’t familiar with it, Code of Princess is a 2D brawler that shares many similarities with Guardian Heroes. It also touts an extensive 4-player multiplayer mode, and I’ve got to say, even the gameplay looks pretty interesting:

Mark that one down in the books, folks: I said even the gameplay looks interesting!