I debated calling this article “why I suck at video games” but that would be defeatist, now wouldn’t it? But let me take a moment to me recall a recent scenario for you:

I’m playing Sumioni, a PS Vita downloadable title, for review. Being the good, timely reviewer I am, I dive right into it, playing whenever I have a free moment. Enter the first boss of the game: A glowing, floating eyeball thing with pointy projectiles, that also happens to be the final boss for the game’s first ending (yes, ending – I’ll clarify momentarily). You know, the first and second tries don’t really count, since you have to get used to the enemy’s patterns, right? Well, yours truly probably clocked in at about 10 tries before throwing in the towel and handing the shiny black handheld over to my husband, who hadn’t touched the game before that moment. I throw him into the deep end and have him restart the level I’m currently on – why waste time replaying earlier levels just so he can learn the ropes?
Shaun beat that boss in two tries. That’s once to figure out all of the game’s controls and the boss’s attack patterns, and a second time to get ‘er done, as they say. I knew my husband was a fiend when it comes to games (you should see him play DotA…), but I was not prepared for immense gap in our skill levels. Does that mean that Sumioni is disgustingly hard, or even more difficult than your average platformer? Well… probably not, because I already knew I was pretty bad at gaming. But it makes for a good story, eh?
That said, I’ve only gone through the first two endings of the game so far (with help from Shaun, of course). You get a rating at the end of each level (which so far have only taken about 2-4 minutes to complete) which will dictate how you will progress on the level “tree.” There are a total of six endings, the first being the easiest to obtain and that last, which I assume is the “best,” being the hardest. You’ll need to get a lot of 2 and 3 star level ratings to follow the tree down to the better endings, which means replaying the initial levels a lot of times. The fact that the game doesn’t really tell you how it scores you at the end of each level is a little confusing, but from what I gather it’s based on the usual stuff: how much damage you’ve incurred and how long it took you to clear the level.
Graphically, I’m quite fond of the game. Many have compared it to Okami, and it’s true that they’re both based on the Japanese art form known as sumi-e, but Okami was so much more colorful and vibrant than Sumioni, so I think in the end the comparison is pretty arbitrary. The backgrounds are rather sparse, much like sumi-e paintings, but so far have been pretty varied between levels. I’ve been seeing a lot of the same enemies, though… Let’s hope that changes as I progress further.
Sumioni utilizes the front and back touch pads in a continuation of the sumi-e theme by allowing you to draw platforms and execute spells by swiping the screen as if your fingertip were a paintbrush. At the same time, you’ll be controlling your demon’s movements with the analog stick or directional buttons, and jumping and attacking with x and square, respectively (I find I prefer using up on the analog stick to jump, though). When your ink meter runs out, and it will run out, you’ll need to rub the back touch pad in order to recover ink. Let tell you, this happens a lot. I don’t know if it’s the way I play, but in boss battles in particular, my pattern of actions goes something like this: thunder magic, fire magic, swipe swipe swipe rear touch pad. Rinse and repeat. You’ll need to be fast, and regaining your ink feels so painfully slow… It’s a fun mechanic but I’m finding it a little hard to get used to. For one, it gets tiring swiping so furiously after a while! Drawing platforms on the screen to evade enemies and position yourself for optimal attacks never gets old, though.
From what I’m hearing the game doesn’t take more than 6-8 hours to complete, so I should be able to finish my playthrough and have my review up before the week is out. Until then, feel free to ask any questions if you’re at all interested in this title and I’ll do my best to answer them!
Oh, wait. Did someone say… pizza? 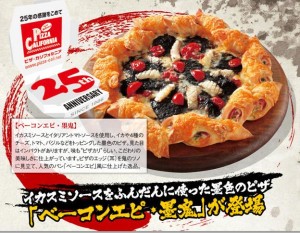 Yup, that’s right! And not any pizza. Sumioni pizza. The few blogs I read that covered this interesting collaboration seemed rather disgusted by the prospect, but I have to say, if I lived in Japan, I would’ve ordered that pizza the day it was released. As it stands, it the promotion was just concluded yesterday, unfortunately.
This awesome pizza not only has squid ink sauce to make it look like it was splattered with ink, but also those funny looking pointed crust pieces that are meant to look like demon’s horns, or so the advertisement says. Other toppings include cheese (of course), basil, tomatoes, tomato sauce, and actual squid.
So, the big question is: Would YOU eat it? I’m personally salivating at the very thought.