I don’t post about manga nearly enough on this blog, and that needs to be rectified! What better way to do so then by writing up some thoughts on a recent title I’ve read? I’ve always been a fan of Arina Tanemura’s iconic style, but have never gone the extra step and picked up a copy of one of her titles. Lucky for me the local library had volumes one through four of her latest series, The Legend of Sakura Hime! 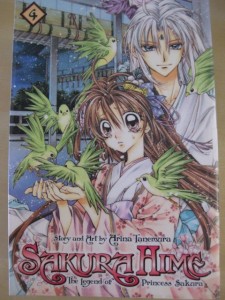 The Legend of Sakura Hime is an ongoing shōjo manga currently being serialized in the monthly manga anthology Ribon in Japan. The story follows Sakura, a teenage girl who’s been engaged to the prince Oura ever since she was a child. Trouble is, it turns out she’s also a descendant of the demon Princess Kaguya. It’s up to her to fulfill her role by wielding the mythical sword Chizakura and destroying all demons that threaten to harm the world she knows and loves. Upon learning her true identity, however, certain forces, including Prince Oura, would rather see her killed!

If you can’t tell, I am rubbish when it comes to writing plot summaries. The Legend of Sakura Hime is pretty standard shōjo fare, but with gorgeous illustrations, more action and darker themes than usually seen in manga aimed at teenage girls, and ample romance, I definitely recommend it to anyone who has a penchant for shōjo. That said, I’m happy I didn’t purchase it – it’s great for a light-hearted read and had a number of cute scenes that reminded me of that giddy feeling I get when a kiss or embrace is drawn both beautifully and evocatively, but in the end the whole thing feels a tad shallow and run-of-the-mill plot-wise, which probably won’t do much to impress more discerning eyes.

I’m not trying to knock the series – The Legend of Sakura Hime is chock-full of romance, intrigue, and action, and is a great way to spend an afternoon for fans of shōjo and magical girls. I wouldn’t place it on any top ten lists, and I probably won’t remember much about it in 3 years, but there’s no harm in that.