I’ve yet to play a Rune Factory title, and I consider that a crying shame. With my newfound love for the Atelier series and borderline obsession with doing everyday tasks like fishing and furniture purchasing in games like Animal Crossing, Rune Factory, with combined elements Harvest Moon and traditional RPGs, is clearly up my alley. So, of course, I was very excited when I heard there was a Rune Factory game coming out for the PS3. Not only that, but this time it was to feature a female protagonist! Best of both worlds, right? 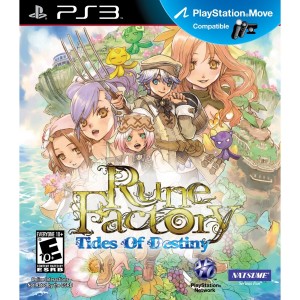 Unfortunately, a couple of things have come to my attention recently in regards to Rune Factory: Tides of Destiny (also known as Rune Factory: Oceans in Japan). You do get to play as a female, that’s true, but there’s a catch: Azel and Sonia, the male and female protagonists, are trapped in the same body. As such, you’re required to play through the game’s main story as Azel, the male protagonist, before unlocking the ability to switch to Sonia.

Even more frustrating than that is the number of bride to groom options. One of the big draws of Rune Factory, much like Harvest Moon, is the number of potential partner choices available, allowing you to woo the man or lady you choose depending on the gender of your main character. Of course the lack of  a same-sex relationship option is a bit disappointing, even though it’s not surprising. In Rune Factory: Tides of Destiny, though you do have the option to marry while playing as Sonia, the pickings are rather slim: there are only 4 marriageable men in the game, including childhood friend Azel, contrasted by a whopping 10 marriageable women for gamers who choose to play as Azel.

According to Yoshifumi Hashimoto, Rune Factory: Tides of Destiny producer, the decision to keep the number of groom characters low was so that they wouldn’t have to cut into the number of bride characters, given the time it takes to create each one. Mr. Hashimoto, I’m sorry, but that just seems like you’re saying,”we couldn’t really be bothered to make more grooms because we’re really catering this game to men anyway” to me.

Needless to say, I’m a bit disappointed… But that probably won’t stop me from buying the game in the future (Even with all the ladies, that trailer still looks gorgeous). I hope that when Rune Factory 4 comes out for the 3DS, however, they will give gamers wishing to play as the female character an experience that is on par with that of the male equivalent.