Happy Monday! Or Sunday evening, for those of you located in other parts of the world (enjoy your freedom while it lasts, eh?). Without further ado or fanfare, I present to you my most coveted collection in my gaming library: 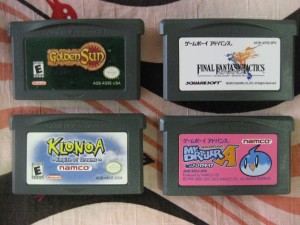 Ok, ok, you’ve got to know I’m kidding, but seriously: this is my complete GBA library. Sad, huh? It’s especially surprising considering what a fiend I am when it comes to the Nintendo DS/3DS (ok not so much 3DS at the moment, but I do like my Nintendo handhelds these days). So, how is it that I’ve pretty much completely skipped a game console with a library that is, on the whole, completely in-tune with my gaming tastes?

Well, I’m not going to go the whole nine yards and detail my complete gaming history (that’ll take more than one post, I believe), but I can delve into a bit of my past when it comes to handhelds in particular.

As far as I can remember, my first glimpse into the world of handheld gaming was thanks to my grandparents, who had a Game Boy (Maybe 2? Perhaps each of them had one so they could play at the same time). I remember visiting them in Florida during spring break, watching them play Super Mario Land and Tetris 2, and being awed at their skill (My grandfather was particularly good at Tetris 2, while my grandmother could clear Super Mario Land).

I got my own Game Boy at some point and have lots of fond memories playing alongside them, trying my hardest to get as far as they did (to this day I still haven’t beaten Super Mario Land). For whatever reason, though, I never really got so into the Game Boy games that I would play them even when I wasn’t visiting them in Florida. If my memory serves me right, I’d usually play for a few days after returning home, only to set them down soon after in my frustration of not being able to advance, moving on to other things until the next trip reminded me of how much fun I had.

So was my relationship with handheld gaming until a few years later, when a Game Boy Advance advantageously presented itself to me. Actually, the method by which I acquired it wasn’t quite that mystical–a well-meaning relative had gifted my grandfather with a clear purple Game Boy Advance for Christmas one year, but unfortunately he found the colors too difficult to see, so the console was passed down to me.

Honestly, I don’t really remember what I did with the thing. I bought a number of games for it, and then traded almost all of them in (There were a few dark years where I traded games in to fund buying more games, but I almost always regretted doing so. Kids, take note: always seriously reconsider before trading in your games). My most regretted GBA trade-in was Castlevania: Harmony of Dissonance (oh, it hurts to remember! I still have the instruction booklet, even), but I also sold Kingdom Hearts: Chain of Memories more recently because I just couldn’t get into the battle system. The only other game I’m sure I had that is no longer with me was Super Mario World: Super Mario Advance 2, which I eventually passed on to a friend’s younger sister along with the console in my junior or senior year of high school.

So, even though I’m sure a got a bit of enjoyment out of the console, all-in-all, the whole thing was pretty short-lived. I guess at the time I was too focused on the Playstation 2 to care much about anything else. Good thing I still had the sense to not to toss 2 of my Game Boy Advance games, even though I didn’t have the means to play them at the time. Well, one of them I couldn’t get rid of no matter how hard I tried–which do you think it was?

Luckily, I didn’t get rid of my GBA pride and joy: Klonoa: Empire of Dreams. I’m a pretty big Klonoa fan, and Klonoa 2: Lunatea’s Veil is one of my favorite PS2 games. With Klonoa: Empire of Dreams being a rather rare title that was released the same year as the system, I consider myself pretty lucky to have snagged a used cartridge at my local game shop. Unfortunately, I’ve never really played too much of it, but from what I have played, it’s been great. The art style is adorable, the music is catchy (Even though some of the music and sounds seem to be taken straight from Klonoa 2), and the gameplay is fun and not too difficult. This title is one that I’m definitely going to be playing more of in the next few weeks–I picked it up for the first time in years last night and restarted my game, and am determined to finish it.

Have you guessed which game I want to get rid of, yet? If you were thinking Final Fantasy Tactics Advance, then you were right! Why would I want to get rid of such a super game, you ask? Well, if you look closely at the picture, it’s actually the Japanese version of the game. In my excitement at seeing it for sale used in Japan during my first trip there many years ago, I decided to purchase it, even though I had next to no Japanese language skills at the time. Needless to say, I never really played it because I couldn’t understand it, and though I tried to sell it online multiple times, no one really wanted it since it was such an easy game to get in English. I could definitely pick up the game now and play through it no problem… The question is whether or not I really want to. Right now it’s not very high on my list.

Mr. Driller A: Mysterious Pacteria and Golden Sun are my most recent GBA game acquisitions. Mr. Driller A I bought in 2009, the last time I was in Japan, at a used game shop in Osaka for a very fine price, and it came complete with booklet and box! Mr. Driller is yet another series I’m very interested in, but Mr. Driller A was actually the first game I ever bought. It’s great to pick up and do a few rounds, and, just like Klonoa, it has great music, adorable graphics, and fun gameplay. I consider it and Klonoa to be the stars of my GBA library. 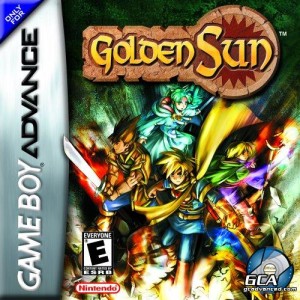 Finally, there’s Golden Sun. This one I actually bought just this year online for very cheap, and I’m happy to finally have a copy. I borrowed it a long time ago from a friend and found it to be quite fun, so it’s always been at the back of my mind as something I wanted to play eventually. When the DS sequel was released, it renewed my interest in the series… But I still haven’t played it. Oh, I’ll probably never complete all the games on my “must play” list!

So there you have it, the story of my GBA game library. Are there any GBA “must-haves” that you’d recommend? One I’d like to get my hands on is Rhythm Heaven, since my husband and I enjoyed the DS version. My library will grow, slowly but surely!

Oh, and for those of you who must know: I did in fact own copies of both Pokemon Blue and Gold (I remember playing a lot of Blue but never really got far in Gold). Sadly, they were misplaced or lost. Who knows where they are now…