This may or may not turn into an ongoing thing, but I know a lot of bloggers out there have themed posts, so I’m going to try my hand with a series called “Japan Envy” to compile all the things that make me wish I was living in Japan. Otherwise this would just be a “hey look at this cute orange juice bottle” post (which it basically is, but I can get away with it now that I say I’m going to do it as a regular series).

That, my friends, is Felyne orange juice. Feast your eyes on that adorable packaging! What I wouldn’t give to be in Japan right now so I could drink cold orange juice out of a Felyne-adorned can. Now, I don’t know anything about this brand Bireley’s, but from the looks of things it appears to be regular old orange juice to me.

So, in all honesty, I could care less whether Monster Hunter Diary G is a quality game or not. I mean, I’m sure I’ll get much enjoyment out of it so long as it’s not horribly misguided. But regardless of gameplay, if it inspires adorable orange juice bottles and does crossovers with My Melody, well then by golly, it deserves my attention! 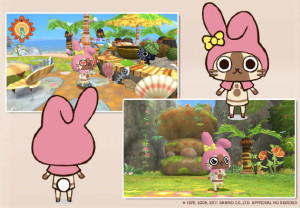