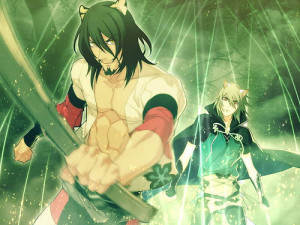 I could spend a whole entry (or entries, even) explaining what boys’ love, or BL, is, but for the purpose of keeping things short I’ll provide a simple explanation: BL/yaoi/shonen-ai is a sub-genre of Japanese manga, written by women for women, that focuses on the romantic and often sexual relationships between men. The genre has expanded to games, and since I feel in the mood to talk about BL games (thanks to The Gay Gamer, who inspires many of my posts these days), that’s what I’ll be covering today. This is by no means a definitive guide or anything, I’m just getting things started.

Have you ever heard of the genre of games called “dating simulation”? If you haven’t, it’s because they are virtually non-existent in the west, due to presumed lack of interest, I would believe. They’re very popular in Japan, though, with names like Love Plus for the DS garnering all sorts of international news coverage for spurring some men to do various amusing public proclamations of their love for the game such as marrying their virtual girlfriends.

Well, just as there are dating sims for heterosexual men, so are there dating sims for women (bet you didn’t know that). Not only are there games for girls where you control a female avatar as you try to win over the love of the man of your choice, but there are also games where the main character is male. These are BL games.

Most BL games are relatively explicit in nature, and are thus limited to PC-only releases due to the strict ratings system for game consoles. Nevertheless, there are a few tame BL games available for consoles, mostly the PS2 and PSP (yes, they still make plenty of PS2 games in Japan).

Perhaps the most popular BL game developer is Nitro+chiral, with titles like Lamento and Togainu no Chi garnering tons of fans in Japan. You can find censored versions of Togainu no Chi on the PSP and PS2, but Lamento (see first image) is too explicit to port, so it remains PC-only. 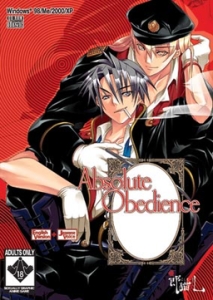 BL games are, on the whole, visual-novel style, meaning you’ll mostly be reading through dialogue and textual descriptions, occasionally being prompted to make a choice, and then for all your efforts you’ll be treated to a number of lovely CGs along the way. Characters are, on the whole, fully-voiced, and voice actors play a significant part in the popularity of the games themselves in Japan. Each game features numerous potential partners for you to choose from, some varying in difficulty as to how tough they’ll be to “get.”

In closing, I’ll confess that I’ve never really played a BL game. Sure, I know a lot about them, and I own the PS2 version of Togainu no Chi, but I haven’t played a significant amount of it. I have played the heterosexual, or otome, counterpart to BL games, where you play a female avatar who is out to find herself a male partner, simply because I quickly tire of visual novels. When I play a game, there is only so much reading I want to do! Otome games are much more interactive, for whatever reason, and offer various stat-maxing options and mini-games to keep you interested enough to play them through until the end. But I’ll save that for another post! Here, have some Togainu no Chi! Let me know who you’d go for if you were to give it a play. 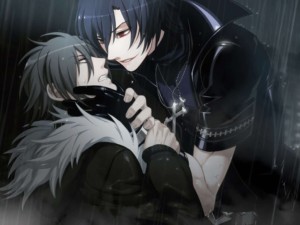